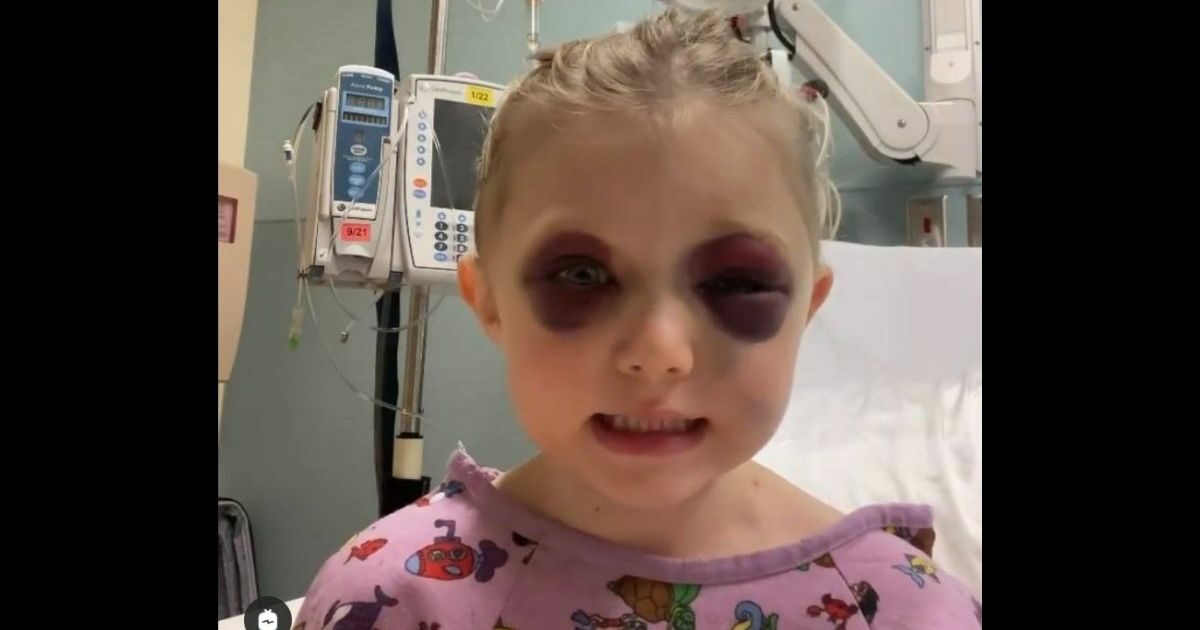 Kristen Ainsworth has been at Blackstone Equestrian in Parker, Texas, since she was just 6 years old. A trainer and mom, she now operates the center and has her own horse-crazy 3-year-old named Brooklynn.

During a session earlier this year, while Ainsworth was working with a rider in an indoor arena, her daughter ran to her without checking to make sure the coast was clear.

“She locked eyes on me and went, ‘Mommy!’ and then she ran, started running into here,” Ainsworth told KDFW-TV.

Brooklynn ended up running right in front of a galloping horse. The horse tried to avoid the girl, jumping over her — but a back leg caught her in the face.

The 3-year-old spent five days in the ICU at Children’s Health Dallas, where she was found to have multiple facial fractures, a traumatic brain injury and an injured eye they thought she might lose.

“I’ve been here since I was 6, we’ve never had an accident like this,” she said. “The doctors say if anything had been different by 1 millimeter we would’ve been looking at a totally different story.

“It takes a village to be able to recover with something like this and our village is so strong and so just, amazing.”

After a few days, Brooklynn was able to go home from the hospital and is on the mend.

“She’s a lucky kid,” Ainsworth said. “She had angels looking out for her for sure.”

Ainsworth has shared their story online, too, as a way to encourage parents that there’s a way forward even when they face really difficult circumstances.

“For all the parents out there — parenting is HARD!” Ainsworth shared on Facebook on June 1. “It doesn’t always go our way and we fall short more often than not… it’s usually a daily miracle that our kids don’t get hurt, right?

“I’m here to share my story because I can fully stand as a mother and say things didn’t go according to my plan. But the great news is that I have a God bigger than me and where I can’t, He can…. I lean hard on my village and there’s nothing like finding support around you when you fall severely short.

“So for all you mommas (and dads) out there — you’re doing a damn good job and your kids are lucky to have you.”

Ainsworth has made sure that Brooklynn is continuing to have positive interactions with horses — a necessity since Ainsworth’s life and work revolve around equines.

While Brooklynn remembers the accident and where it took place, it doesn’t seem to have put a damper on her interest in the large animals, and it looks like it won’t be long before she’s “back in the saddle.”

Young Not Stupid: Here's Why I Finally Decided to Delete Snapchat