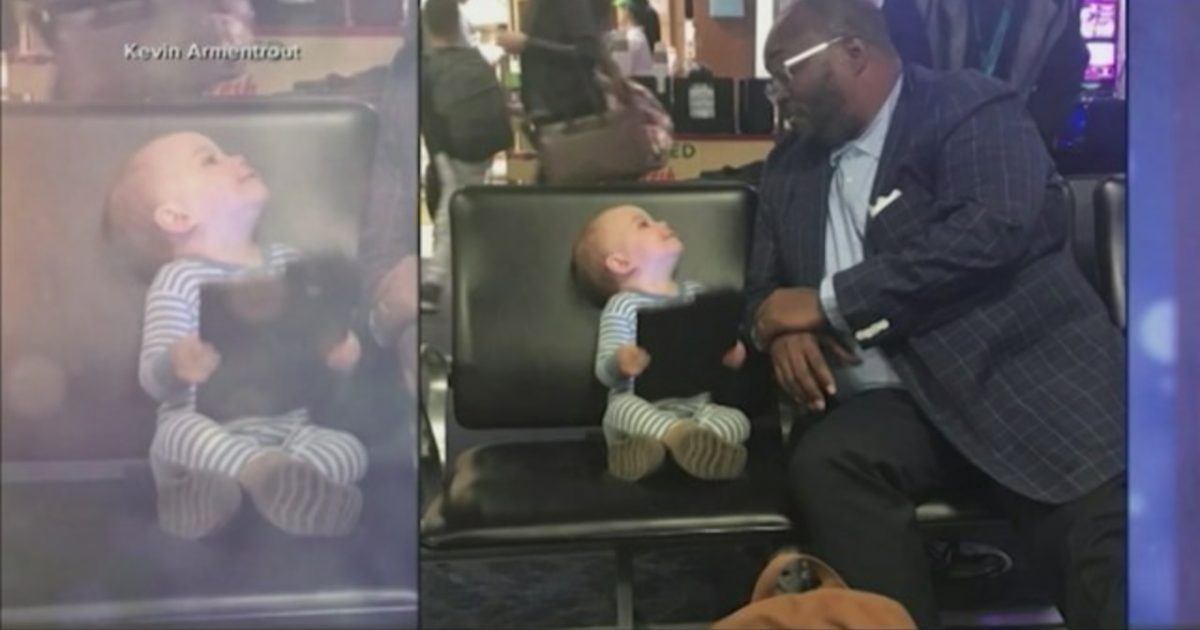 It seems like airports have become one of the prime locations for beautiful moments between strangers captured on video that go viral.

Whether it’s singing or dancing at the gate or comforting a nervous mama flying solo, it seems that while air travel can often bring out the worst in people, it strangely seems to bring out the best in others.

But this latest airport-moment-gone-viral video is just too much.

Author and motivational Kevin Armentrout was traveling with his wife and 16-month-old recently and the parents were a little nervous about how the little one would fair in a big airport.

They decided to let her toddle around for a bit, where she promptly made friends with a middle-aged businessman and spent 45 minutes eating snacks and watching cartoons with him.

“I just put her down, let her walk and followed behind her but I was anxious about her touching people’s stuff and not everyone wants a kid slamming into their knees,” Armentrout told “GMA,” according to Yahoo News. “But as she approached him, he said, ‘You want to sit next to me?'”

The stranger, Joseph Wright, said he saw Carter walking around and asked if she wanted to take a seat next to him. She obliged and the two struck up a conversation about Snoopy.

“It just warmed my heart a little,” he told “GMA.” “[She] just wanted to share her food with somebody, you know? That was very touching, and it was just fascinating to see. I get a kick out of young kids who are just growing and showing love.”

In a Facebook post that’s since been shared 65,000 times, Armentrout wrote: “Watching them in that moment, I couldn’t help but think, different genders, different races, different generations, and the best of friends. This is the world I want for her.

In a country that is continuously fed that it’s so deeply divided by beliefs, I want her life to be filled with moments like this… not liberal or conservative republican or democrat, socialist or capitalist, just HUMAN.”

“People just come up and talk to him all the time,” Wright’s wife, Sheila, told “GMA.” “But when it started going viral. I was just like, ‘Wow.’ It was surreal. I really kind of — I couldn’t believe it.”

Last night, while waiting to board our plane, @_carterjean_ was being her usual inquisitive self wanting to meet and say…

One of the most wonderful things about small children is that they remind us how easy it is to make friends, something we lose the sense of as we get older and more guarded towards strangers.