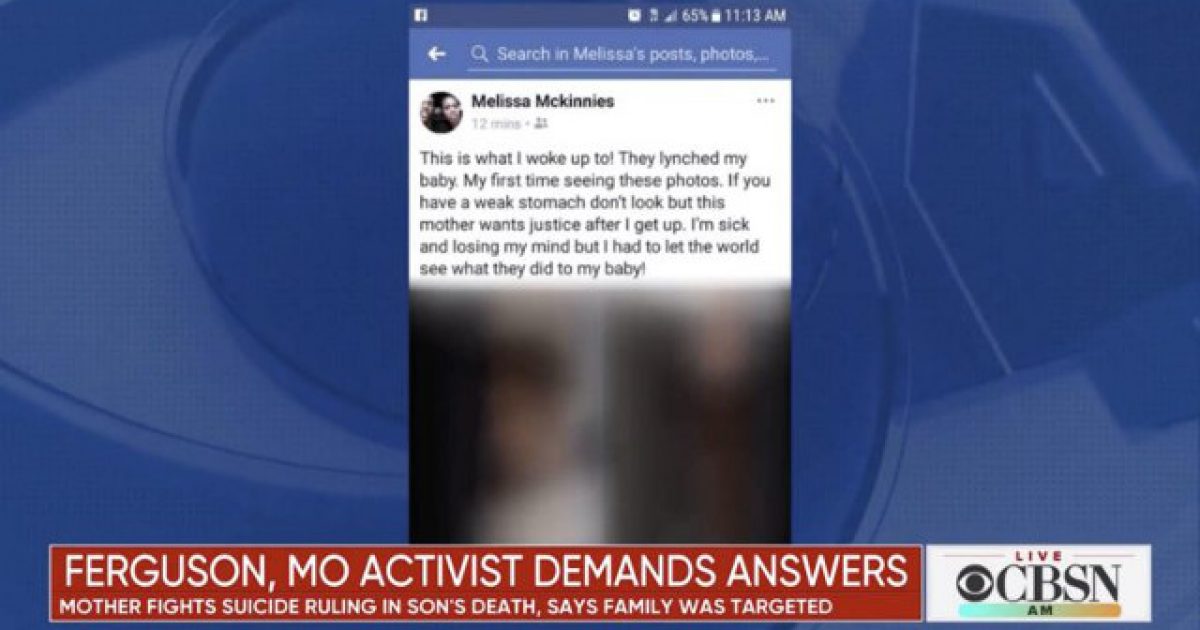 A mother and activist from Ferguson, Missouri recently took to social media to say that her son, 24-year-old Danye Jones, was targeted and lynched. However, police have ruled the incident a suicide.

Police discovered Jones in the early morning hours of October 17, hanging from a tree in the backyard. A knotted up bedsheet was tied around his neck.

Melissa McKinnies — a prominent activist — in a since-deleted Facebook post, wrote, “They lynched my baby,” and shared a graphic photo, the Post-Dispatch reported.

She wrote, “This is what I woke up to! They lynched my baby. My first time seeing these photos. If you have a weak stomach, don’t look, but this mother wants justice after I get up. I’m sick and losing my mind, but I had to let the world see what they did to my baby!”

The Post-Dispatch reported that McKinnies previously helped organize protests in the wake of the 2014 shooting of Michael Brown in Ferguson, Missouri, and had been subjected to threats since.

McKinnies was also reportedly worried that someone would try to kill her son.

She said that her son did not have suicidal tendencies and did not know how to tie the knots that were utilized in the makeshift noose. She noted that the bedsheet used in Jones’ hanging also didn’t come from the family home.

Notably, Jones reportedly had packed an overnight bag, which had been left outside. McKinnies said that Jones may have been leaving the home with someone he trusted.

The St. Louis County Police believe Jones committed suicide, noting there were no signs of struggle or trauma on the body. The actual cause of death is pending a toxicology report. McKinnies is planning to stage a protest at the St. Louis County Justice Center located in Clayton, Missouri, with the goal in mind of persuading investigators to look into the case as a homicide.

According to St. Louis County spokesperson Shawn McGuire, law enforcement is still treating the matter as a suicide.

Vermont Family’s Home Goes Up in Flames. That’s When an Unlikely Hero Jumped Into Action.