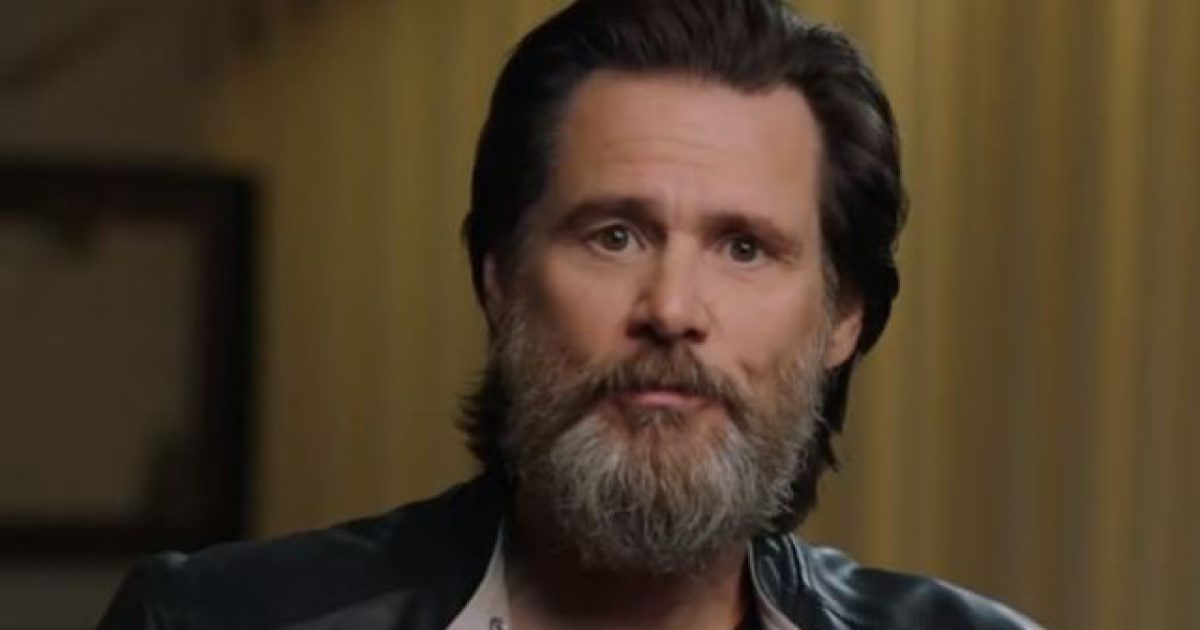 Actor Jim Carrey has, as of late, become completely obsessed with President Donald Trump, creating bizarre, provocative pieces of art designed to express his unhappiness with the current administration.

Like a typical Hollywood liberal, he’s bashed the president, trashed the Second Amendment, and done all sorts of things by creating paintings and sharing photographs of them all over Twitter. One particular piece was a very disrespectful portrait of Press Secretary Sarah Sanders.

Well, now Carrey seems to be taking his act on the road. The actor, most famous for his role as Ace Ventura, a pet detective who frequently and literally talked out of his own butt, went on a strange anti-Trump rant during an acceptance speech at the Britannia Awards in Los Angeles.

Carrey was one of six honorees at the event held at the Beverley Hilton on Friday evening.

“I’m glad it didn’t come in the mail,” Carrey joked about his award, referencing the rash of mail bombs sent to prominent Democratic figures in recent days. “Yes, I no longer have packages delivered to my home in the great America fashioned in the last couple of years. I don’t ever remember it being this great, actually.”

Today they tried to murder two Presidents as well as public servants and journalists. Make no mistake, these terrorists were encouraged and emboldened by the hate speech of Donald Trump. If you can’t see the clear menace of this man’s influence by now then you are a part of it. pic.twitter.com/L7kYcpcPKO

After expressing thanks to BAFTA (British Academy of Film and Television Arts) for his award for Excellence in Comedy, Carrey credited silent film-era star Charlie Chaplin with being his inspiration before making references to Trump.

“We need to be clear: Shamelessness is not, and will never be a superpower. It is the mark of a villain. Kidnapping children is not what great nations do,” he said, referring the Trump administration’s zero-tolerance policy of separating migrants from their children at the U.S.-Mexico border. “One half of America at this moment believes there is a sinister deep state diabolically plotting, to … what? Give them health care?”

“We in America are misinformed,” Carrey said. “Reality shows have warped our reality of what a hero is, or what truth is. So tonight I’d like to dedicate this award to those who remind us of our virtues, who remind us of the truth.”

He said Chaplin took on the right wing in his day, “which we are fighting today.”

Carrey wasn’t the only individual who decided to weigh in on the state of America. Actress Cate Blanchett took an opportunity to address the divisive political climate in our country.

“The black, the white, the blue, the red, it’s just like, Oh my God, when are you just going to get on with the fact that we’re all different, embrace that difference and just move forward?,” she said while accepting a trophy named after director Stanley Kubrick. “We’ve got to acknowledge that we’re all f—– up, and we all need forgiveness…Turn around and give the person beside you a hug.”

Blanchett’s take on things seems to present a bit more of a balanced approach to all the issues splitting the nation than Carrey’s, which is proof positive that even some in the Hollywood crowd are sick and tired of all the nonsense and fighting.

Perhaps it’s time for Americans to start ignoring the easily offended folks of the left and look for ways to connect to each other, to find common ground, and remember what it’s like to be human beings and not political parties?

Megyn Kelly’s Replacement Has Been Chosen, and It’s a Former President’s Kid