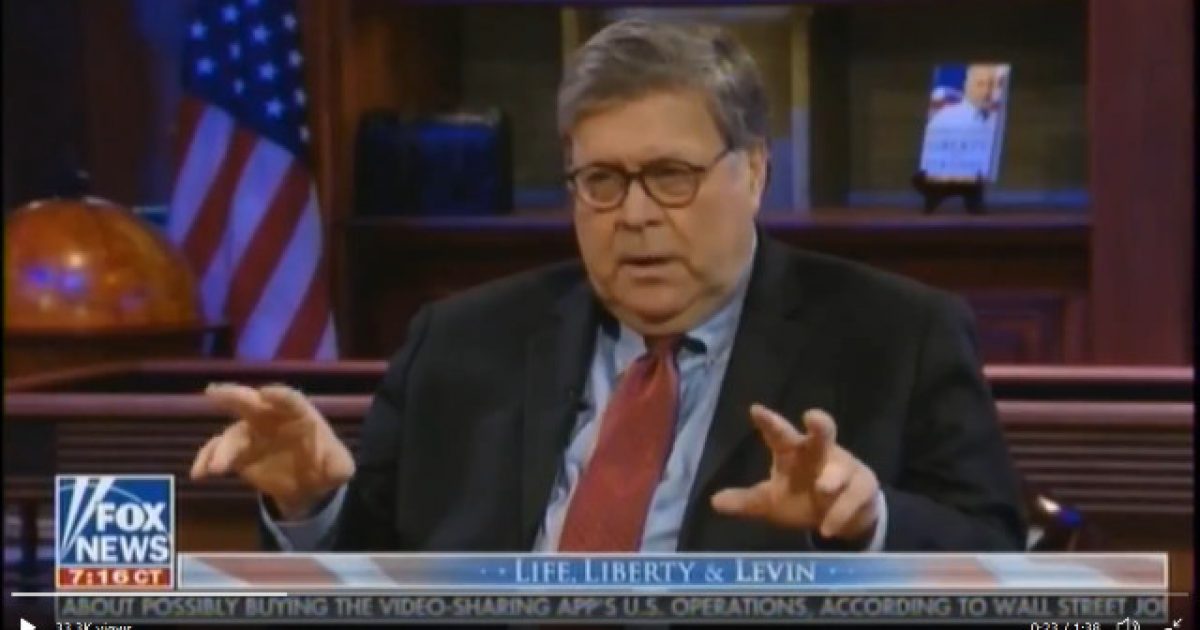 Attorney General William Barr is one of those people that President Trump has surrounded himself with that is much like him in very important ways that are desperately needed in the current political climate.

Barr is a man unafraid to speak the truth. He’s not easily intimidate by the leftist media and he’s always ready and willing to call them out for their nonsense, which is precisely what he’s done concerning the topic of how the media has covered radical left-wing extremism.

The attorney general conducted an interview with Fox News host Mark Levin on Sunday and stated the mainstream media is lying to the public about the extent of far-left violence exploding in streets across the country.

“We have the citizen reporters, who have these videos of these events, which are quite different than what we get a lot of times from the media, which seems to be censoring the violence,” Levin said to Barr. “No?”

“Absolutely. Their narrative – they are projecting a narrative,” Barr said. “When the word narrative came into currency, I knew we were in trouble, because the word narrative really suggests that there’s no objective truth. There’s no real story of what happened, it’s just everyone has their own narrative.”

“And you get to then – the press can justify presenting a story that doesn’t really correspond to objective truth, but it’s our narrative. We have a narrative, you have a narrative,” Barr continued. “I’ve been appalled at — on this violence, because it’s happening right out in the streets, anyone with eyes can see what’s happening. They see the violence.”

Barr concluded by saying, “And yet you hear about these peaceful demonstrators. So it’s just – it’s a lie. The American people are being told a lie by the media.”

AG Barr on the violent Left who throw rocks at police: "You don't see it on any of the national news. You don’t see it on the networks… [or] on the other cable stations… [Y]ou hear about these peaceful demonstrators… The American people are being told a lie by the media.” pic.twitter.com/3jeiqrzdJa

Barr is spot on in his assessment of how the media is shaping the narrative concerning the violence and rioting that is happening across America. Those of us with eyes wide open, however, are not stupid enough to fall for the tricks the leftist propaganda machines continue to push on everyone.

Unfortunately, lots of Americans still believe what they are being fed through news outlets like CNN and MSNBC, but those numbers are dwindling as time progresses forward. Radical leftists are finally laying their cards out on the table and it’s not quite having the effect they planned.

In fact, they are creating their own resistance by doing so. But oh well. Keep making that mistake and waking up America.