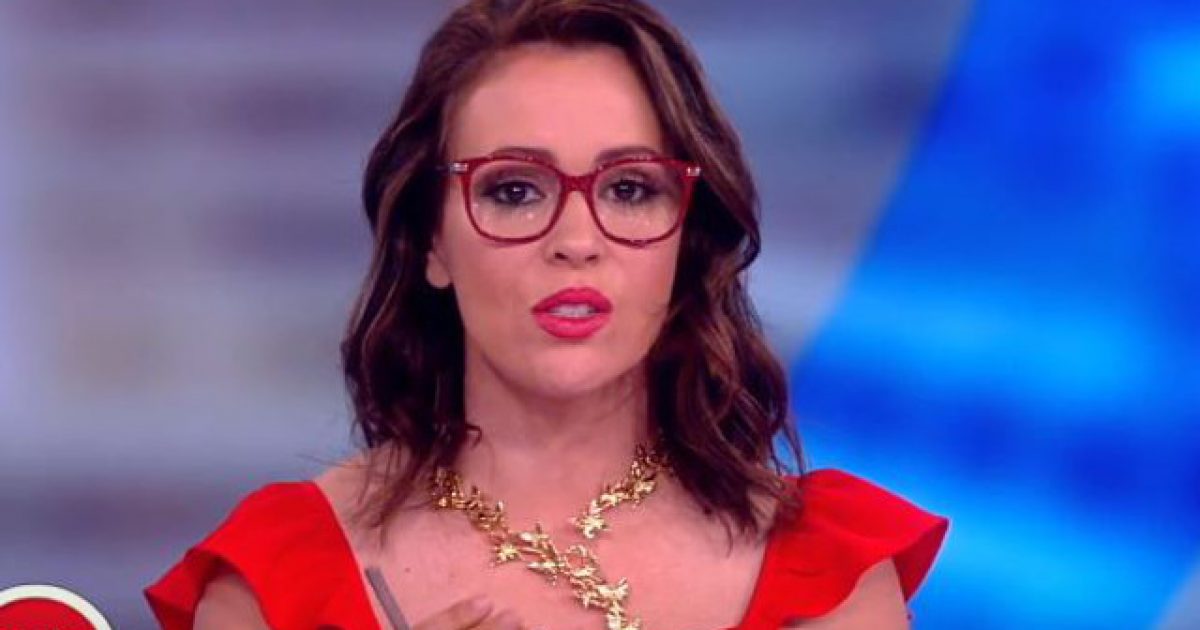 After months and months of condemning President Donald Trump , his administration, and his supporters, hardcore leftist actress and activist Alyssa Milano attempted to extend an “olive branch” to folks who backed the president.

However, things didn’t quite go as she planned. In fact, people let her know that they weren’t going to have anything to do with her or her olive branch. And who can blame them?

It’s insulting to be treated like garbage and then expected to make peace after Milano gets her way.

“I’d like to extend an olive branch to Trump supporters. I am ready to move #ForwardTogether,” Milano tweeted out to her 3.7 million followers.

“There’s so much work to do to heal the nation. Let’s be a part of the solution and not add to the problems we face. My comments are open. Please reply with #ForwardTogether,” she said, adding a heart emoji, because that just makes it all better.

I’d like to extend an olive branch to Trump supporters.

I am ready to move #ForwardTogether.

There’s so much work to do to heal the nation. Let’s be a part of the solution and not add to the problems we face.

My comments are open. Please reply with #ForwardTogether. ❤️

We’re going to need a lot of humility and compassion right now. Anger and triumphalism is less helpful.

Trump supporters were quick to react to Milano’s offering on Monday, and a majority did not meet her with kind words in return. Several balked at the star’s approach, calling it a “joke” after her several outcries for Trump to be ripped from office.

“I remember you. You were the one glaring at Justice Brett Kavanaugh during his hearings. You were the one that called conservatives every name in the book and didn’t sensor your words in the least. No way you’d be offering an olive branch had your party lost … How about NO,” one person reacted.

Another wrote: “I’m too lazy to read the comments but I suspect this yielded exactly zero Trump supporters to take your olive branch.”

“This has to be another sick joke what has happened to you? four years of the most insane sick tweets about our @POTUS and anyone who stands with him now you have been cured? we the normal and descent will ask just 1 question this time next year what has SLEEPY done for you?” Another user said.

“Moving forward implies you recognize & atone for the wrong you’ve done. It takes time to build back broken trust. Expecting everyone to say ‘oh let’s forget you called me a Nazi, let’s hang ou’ is both hypocritical and immature. Sorry, you don’t get the moral high ground here,” another posted.

Celebrities, especially liberal ones, seem to be completely and totally out of touch with reality. These folks live such privileged lives that they can’t seem to understand why hard working Americans love the president and his policies.

These individuals are sheltered, have plenty of money, and never need to worry about much of anything. Heck, they even get paid to play pretend all day and live in a fantasy land while others are out there sweating and breaking their backs to earn a living. It’s crazy.

If Milano really wanted peace, she should have thought about how she treated Trump supporters during the last four years.