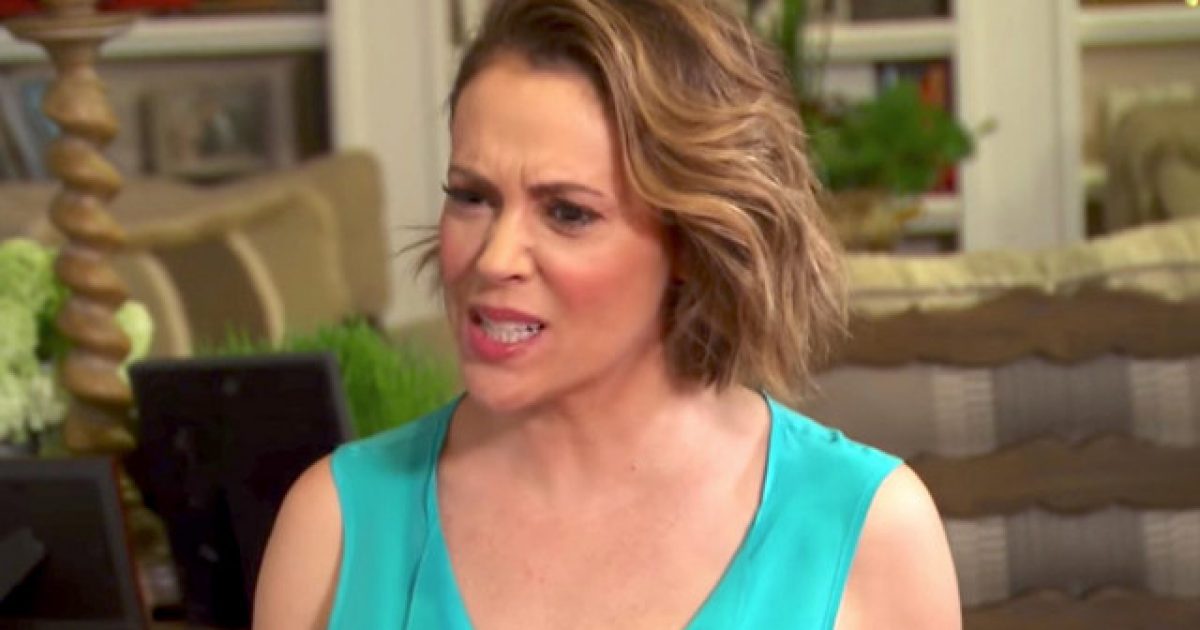 Actress and extremely outspoken leftist Alyssa Milano has really been doing her best to get involved in hashtag activism, hoping to revitalize her career with her new found, unabashed “wokeness,” which is really just a desperate ploy to regain a bit of relevance.

Unfortunately, a lot of the comments she makes, especially on Twitter end up making her look ridiculous, like any other celebrity attempting to speak on issues they don’t understand in order to get a refill on the whole 15 minutes of fame deal.

Well, it seems Milano has really stepped in it now, as she decided to weigh in on the Fourteenth Amendment not being intended for women. That didn’t go over well. At all.

The constitutional debate got rolling with Milano accusing House Speaker Paul Ryan (who happens to be a Republican) of supposedly not believing that women should have equal protection under the Constitution (h/t Twitchy).

“I asked for a meeting with @SpeakerRyan today—to discuss equality for women and the Equal Rights Amendment—he declined,” tweeted Milano. “96% of Americans believe that women should be protected under the constitution. He is the 4%. #ERANow”

I asked for a meeting with @SpeakerRyan today—to discuss equality for women and the Equal Rights Amendment—he declined.

96% of Americans believe that women should be protected under the constitution. He is the 4%. #ERANow

That post prompted this reply quoting the 14th Amendment:

Honestly, I cannot see any reason any citizen needs to do anything. I know the foolish patriarchs feel they can assume women citizens are different.

Still, the 14th Amend uses the term "person", not "men". Therefore, it has been UNCONSTITUTIONAL to deny equality to all.
Resist# pic.twitter.com/3aV5keBJrc

Milano responded by asserting that the 14th Amendment was “clearly” not intended to apply to women because they couldn’t vote when it was written.

“Hi. The 14th amendment was included in the constitution before women even had the right to vote so clearly it was not meant to apply to us,” she wrote.

Hi. The 14th amendment was included in the constitution before women even had the right to vote so clearly it was not meant to apply to us.

Here’s how others responded to her statement:

What part of All Persons excludes woman?
Take a civics class

Okay, if it didn't exclude them why do we have a 19th Amendment?

Hi. The 1st amendment was included in the constitution before radio, television, and the internet existed so clearly it was not meant to apply to them.

The 14th amendment specifically refers to states being required to allow all men 21 and up, to vote, or they wouldn't get Congressional representation.
Gender is singled out for that one issue only. If the 14th in total was only to apply to men, that would have been up front.

Look, all American citizens have the right to speak their mind, to share their worldview and attempt to persuade others of its validity without worrying about being shut down by the government. That’s the First Amendment in all of its glory.

However, just because you can speak your mind, doesn’t mean you should speak your mind. Especially if you have no earthly idea what you’re actually talking about.

In other words, if Milano is going to engage in politics, perhaps a study course on the Constitution should be high a high priority on her “to do list?”

Teacher Refuses to Call Trans Kids Preferred Name, This is What Happened Next