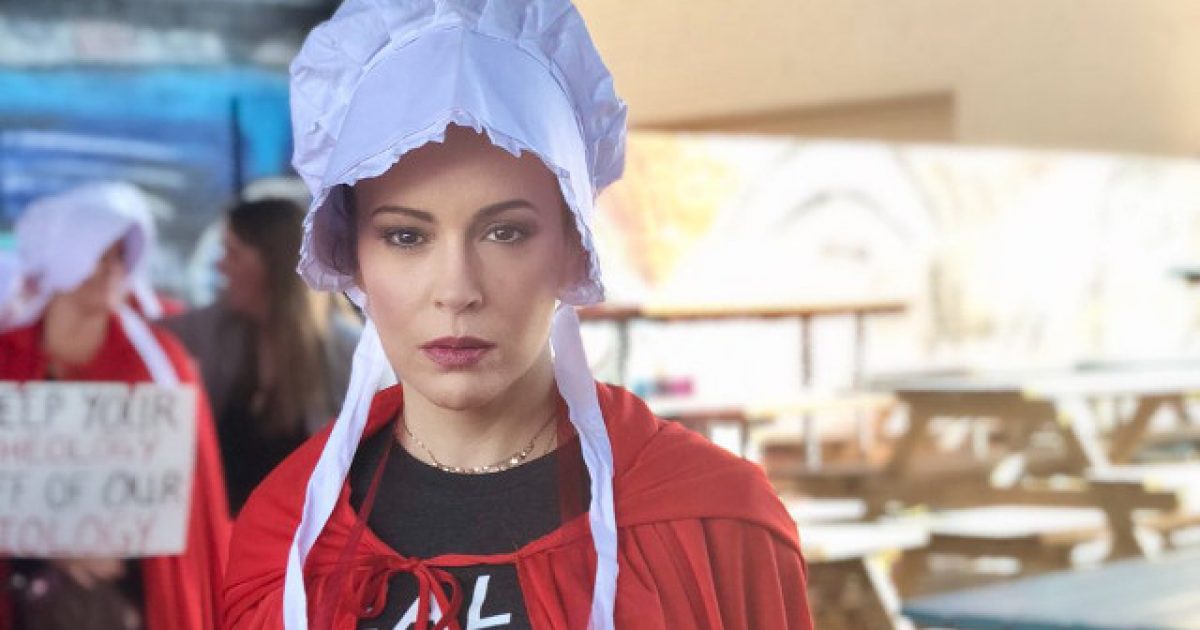 It seems that totally irrelevant actress, Alyssa Milano, is absolutely determined to make herself become a viral meme spread far and wide across the Internet, thanks in large part to her wackadoo liberal rantings.

However, her latest plea for attention, a “Handmaid’s Tale” themed photograph she posted on Twitter, has taken her previous insanity and somehow managed to kick it up a few notches. Bam!

Topping her absurdity yet again, the Charmed actress posted a very serious photo of herself to Twitter on Sunday posing in a Handmaid’s Tale outfit, highly reminiscent of Strawberry Shortcake, holding a “Never Kavanaugh, Never Gilead” sign. Milano is reportedly in Arizona, participating in the traveling “Rise Up for Roe” pro-abortion tour.

Brett Kavanaugh was nominated to the Supreme Court by President Donald Trump after Justice Anthony Kennedy announced his retirement. Gilead is a reference to the fictional theocratic regime in Margaret Atwood novel The Handmaid’s Tale.

The 45-year-old captioned the photo with hashtags, #RiseUpForRoe, #WeAreNotProperty, #StopKavanaugh.

So apparently, the leftist idea of “liberty” means having the freedom to rip an unborn baby to shreds and sell its body parts on the black market. Because, like it or not, that’s precisely what Milano and her brain dead protesting is backing here.

Anyway, here’s some of the responses to this ridiculousness. These are priceless:

I finally figured out who Alyssa Milano was reminding me of. pic.twitter.com/1ZcBbRWUoV

Apparently over-acting is a trait in her personal as well as professional life. pic.twitter.com/I9Ua1fpA1Y

If Milano is really this desperate for attention, perhaps she ought to be spending her time developing her acting skills and get back to her craft rather than continuing to spend time being a political activist looking to score relevancy points with the “woke” crowd.

Sen. Gillibrand Slammed For Inability to Get Things Done. She Cries ‘Sexism.’ Her Opponents Response is Awesome.