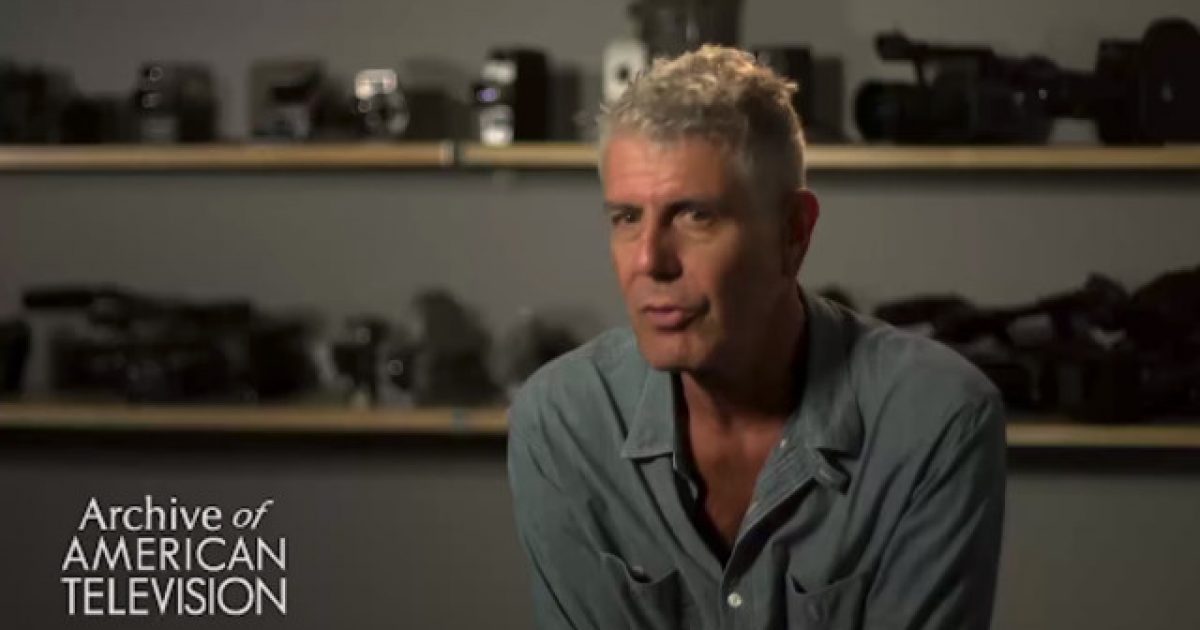 A new interview by Anthony Bourdain has been released weeks after his tragic suicide in a hotel room, features the celebrity chef being brutally honest about a wide range of topics, including the Clintons and President Obama.

In the interview, Bourdain refers to former President Bill Clinton as “entitled, rapey, gropey, grabby, and disgusting.” That’s just the tip of the iceberg.

Below are some of the quotes that are making headlines, first his opinion on his “disappointment” with Hillary over her Harvey Weinstein statement:

Bourdain: [W]atching the Clinton apology on Weinstein, and [Asia’s] watching this statement, there was a lot of anticipation. People were really hoping she’d come out with a… I don’t know. Let’s just say with something different. I immediately tweeted my disappointment, very much shaped by what I saw around me. And I will tell you, that was really f***ing frightening, the reaction to that. You know, I voted for her.

Bustillos: I did, too.

Bourdain: I was really disappointed with the statement. But even by expressing that, the way that my comment was turned, very neatly—suddenly I wasn’t expressing disappointment in her statement; I was blaming her for Harvey Weinstein’s crimes. The way that turned very nicely was a good bit of artistry and deeply frightening to me and really, really …

After Bourdain admitted he had “no love for Clinton,” Bustillos asked, “Should we have gotten rid of Bill Clinton after the Lewinsky scandal?” “No,” said Bourdain. But then he said this:

Bourdain: Bill Clinton, look, the bimbo eruptions—it was f***ing monstrous. That would not have flown today. A piece of sh*t. Entitled, rapey, gropey, grabby, disgusting, and the way that he—and she—destroyed these women and the way that everyone went along, and, and are blind to this! Screamingly apparent hypocrisy and venality. How you can on the one hand howl at the moon about all these other predators. And not at least look back. OK, let’s say, well, it was all consensual: powerful men, starstruck women, okay fine, let’s accept it at its most charitable interpretation. Fine. He is a very charming man, I met him, he’s f***ing magnetic. As is she. When you’re in the room, you think wow, she’s really warm and nice and funny. But the way they efficiently dismantled, destroyed, and shamelessly discredited these women for speaking their truth is unforgivable. Unforgivable. Why didn’t we get rid of them? We should’ve gotten rid of them back then.

Bourdain also had some unflattering things to say about Barack Obama, whom he found “very unconvincing in public, much of the time,” though he found him in person to be “gracious, graceful, real, funny” and not calculating. “Minute one he started f***ing with us,” said Bourdain. “He promised transparency, he like—more whistleblowers were prosecuted than at any time. There’s not one f***king banker in jail. Not one! Jail me one f***in’ banker! These people stole nine million houses!”

As you can see, Bourdain wasn’t much for filtering his thoughts, opting instead to deliver his exact thoughts and opinions on things, regardless of whether or not it offended those around him.

In many ways, this brutal honesty is refreshing in a culture like ours that wants everything to be politically correct. In fact, it’s this very same character trait that endeared Donald Trump the American public and led to his being elected president.

His opinions, though strong and perhaps articulated in too crude a manner, aren’t exactly wrong. In fact, the Clintons deserve all of the criticism he heaped on them and a lot more, seeing as how they are one of the most corrupt families in politics.

Still, it’s sad to know this man took his own life, not knowing that God could have helped him walk through all of the difficulties he was facing on his journey. Thoughts and prayers for the family.

Just How Strong is the Economy Under President Trump? New Economic Indicator has the Answer. Liberals Will Hate This.

WATCH: Founder of Papa John’s Speaks Out, Tells His Side of the Story and it Isn’t Pretty