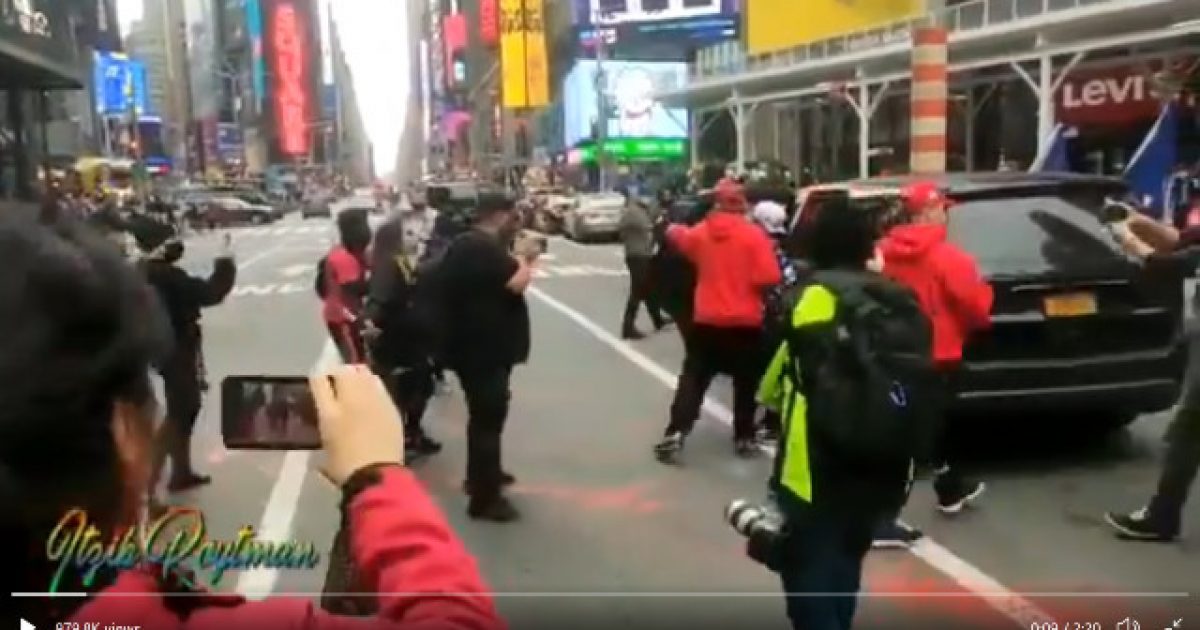 A group of angry anti-Trump rioters took it upon themselves to express their hatred for the president by physically assaulting a “Jews for Trump” convoy in New York City on Sunday, blocking cars participating in the event and throwing objects at them.

“According to the police, the pro-Trump caravan passed through Times Square, where it converged with a group of anti-Trump protesters who had marched from Brooklyn,” The New York Times wrote in their report on the incident. “The cars in the convoy were then blocked by counterprotesters, and some drivers got out of their cars to confront the anti-Trump demonstrators.”

Trump lawyer Rudy Giuliani was near the action and had his car attacked by the violent activists. Giuliani told The New York Times that the incident represented a microcosm of the type of America that voters will be choosing in next month’s election.

“I would love to have had a campaign commercial of it and put it on in the middle of America and say, ‘Who would you prefer for the next four years?’” he said. “This group of foul-mouthed people who don’t seem to have a vocabulary beyond three words, or these very nice Jewish people who are driving in the car and not saying anything back and not doing anything other than exercising their right to say they’re for Donald Trump.”

Journalist Andy Ngo, a reporter who testified in front of the U.S. Senate this year on Antifa, shared videos on Twitter of the violence.

“Antifa black bloc rioters attack the ‘Jews for Trump’ caravan participants in Manhattan,” Ngo posted on social media. “The Village People is blasting in the background.”

Antifa black bloc rioters attack the “Jews for Trump” caravan participants in Manhattan. The Village People is blasting in the background. pic.twitter.com/R2Fd2nTXbg

Ngo posted up another clip with the following caption: “Black bloc person who punches a ‘Jews for Trump’ caravan participant gets knocked to the ground when he tries to run away.”

NYC: Black bloc person who punches a “Jews for Trump” caravan participant gets knocked to the ground when he tries to run away. pic.twitter.com/WbPpFWEu2o

People in New York throw projectiles at driving participants of the #JewsforTrump caravan below. pic.twitter.com/5QBYiX29Tv

NYPD Chief Terence Monahan stated that investigators are looking into the incident.

Folks, the people on the radical left in this country want you to believe they are “tolerant” fighters against racism and injustice. In truth, they are hate mongers who will destroy anyone, regardless of race or ethnicity, who does not fall in line with the groupthink of modern progressivism. This is what makes modern-day liberals so dangerous.

Here’s to hoping that those involved in this horrendous incident are found and brought to justice.

In COVID-19 Times Or Not: Each Day Is Precious — Opinion