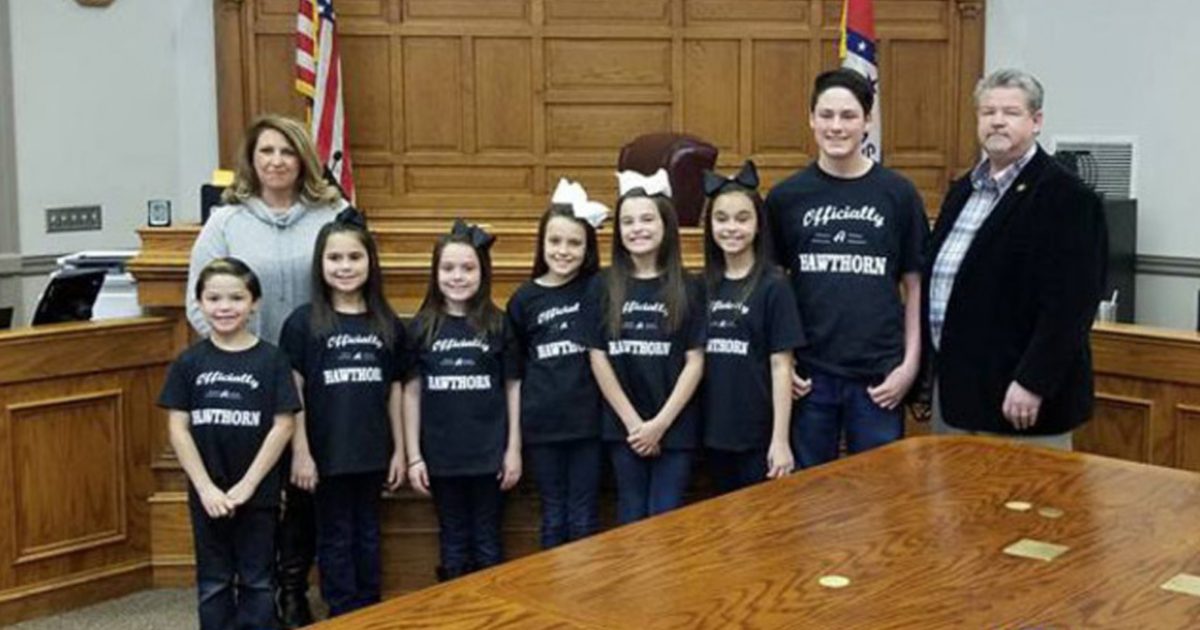 Just a few short days before Christmas, a group of seven Arkansas siblings in foster care got the greatest gift they could ask for: adoption.

When Michael and Terri Hawthorn of Hot Springs, Arkansas first became foster parents, they knew they were in for quite a journey. But they were convinced it would not be a life-long journey.

“…I said, ‘We’ll do it for a couple of years, but we’re not gonna adopt any, so don’t get that in your mind,'” Michael shared with Yahoo Lifestyle of their initial decision to foster. “Well, we ate our words there.” Did they ever!

Throughout their time as foster parents, the Hawthorns have loved and sheltered more than 80 children.
In April of this year, they adopted a pair of siblings, ages 1 and 3, but their family was not yet complete.

A pair of ten-year-old twins came into their home in 2015 and, in spite of frequent relocation by county officials, the children were able to stay in the Hawthorn’s loving home on and off for three years.

“So they were with us, then [the Department Of Human Services] moved them, three months later we got them again and had them for several months, then DHS moved them again,” Michael explained to Yahoo. “After that, we had to get a senator involved, and he had to pull some strings.”

At that time, the Hawthorns weren’t even aware that the twins had five other siblings in the system. Once they found out, it became their mission to open their home to all seven children, ranging from 8 to 15 years old.

“The mom’s rights had been terminated over a year ago,” Michael said, offering some insight into the children’s heartbreaking background. “They come from a very rough situation. Both parents on drugs. Very unhealthy situation that they were in.”

“The only times we got to eat is when our neighbors would sneak us a bag of chips,” Kyndal Hawthorn, one of the seven children, said to THV11. “We didn’t have a can opener, and they’d give us the cans that we didn’t know how to open. So, sometimes we just didn’t eat.”

“When I got [to the Hawthorn’s home] I was like, oh my gosh, we get our own beds,” said Layna Hawthorn. “We never got that, we had like one bed and most of us slept in the floor,” Kyndal added.

The couple began the nearly year-long process of adoption back in February, and they finally shared the good news with the children in November. “We told them the Sunday before Thanksgiving at church we were adopting them,” Michael recalled.

What Michael and Terri didn’t know was that that one of the kids made a wish on a falling star the night before in hopes that the Hawthorns would adopt her and her siblings. “They were in tears, a little jumping up and down,” Michael said. “Very excited.”

“It feels good to actually have a family to wake up to every morning,” Kyndal shared with THV11.

“It feels so great knowing we have a family now and won’t have to go anywhere else,” said Dawson Hawthorn, 15.

“These kids did not ask to come to foster care, four or five different homes, or schools,” Terri shared with the local news outlet.

“This is a blessing, they are a blessing,” she continued, addressing the common complaint that nine kids in total are too many. “Every day these kids wake up and they are giggling and they are happy, and you see the smiles on their faces, that’s what makes this worth it.”

“We hope this will give other opportunities and people will consider opening their homes to foster care and adoption,” Terri said. “There is such a big need for families in Arkansas, and we will be the first to tell you, it’s not always easy, but it’s worth it. Lots of prayer and love is what made this possible.

Prayer and love are absolutely mandatory for any family to thrive, especially such an amazing family as this one. God bless them!