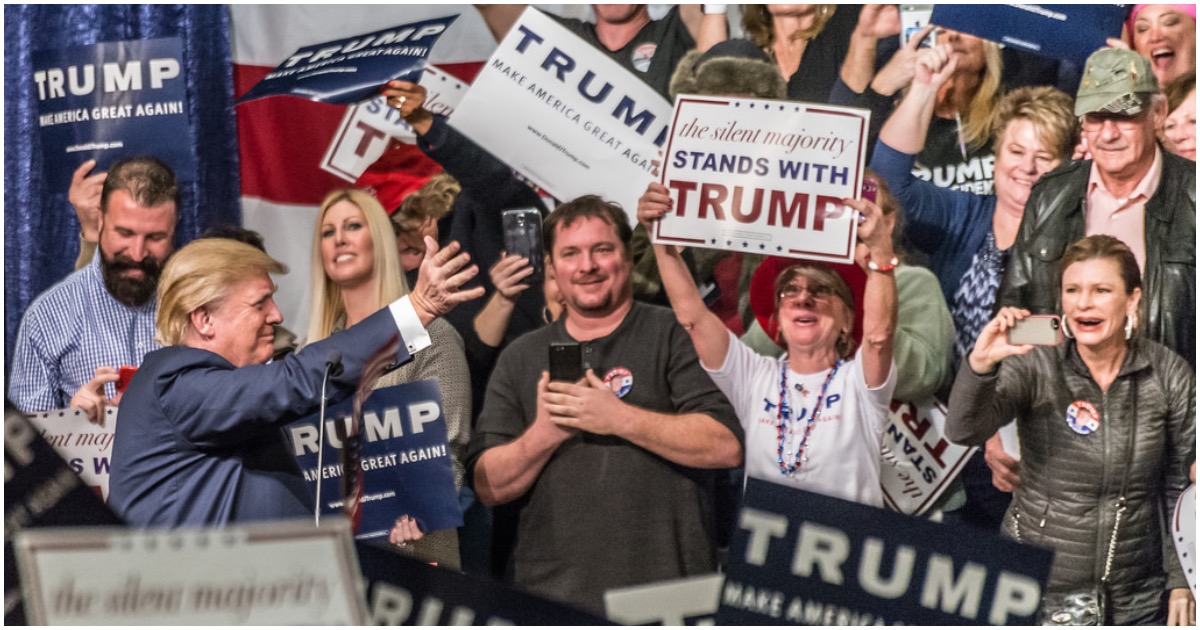 12,000 Trump-supporting American patriots were inside the arena in Chattanooga, Tennessee.

A lot more supporters couldn’t get in because the place was filled to capacity, as is generally the case when Trump is campaigning.

Here’s the view from inside:

The McKenzie Arena in Chattanooga is jam-packed for tonight’s Trump rally. The UTC website says the arena’s capacity is more than 10,000. pic.twitter.com/7dEizGQXnz

Flags of Patriotism can already be seen in the lines forming outside President Trump’s #MAGARally in Chattanooga, Tennessee tonight. Campaign tells #TruNews a 12,000 man #RedWave in expected inside. pic.twitter.com/D0E5zEiwtt

Check out the left’s response, where some people felt it necessary to kneel for (and denigrate) the national anthem:

Trump arrived at rally arena in Chattanooga to loud protest chanting: “No Trump, no KKK, no fascist USA!” pic.twitter.com/GIHH5Z8CsS

These types of actions are why the GOP could very well retain both chambers of Congress on Nov 6.

Trump’s rally for Senate candidate Josh Hawley in Missouri on Thursday was attended by 27,000 supporters.

It was 50 degrees outside in Columbia and drizzling.

Nobody seemed to care.

One word to describe President @realDonaldTrump’s rally in Columbia: LOUD!

Thanks for coming President Trump – we’ll see you in Cape Girardeau next week. pic.twitter.com/aboP8RneNy

This Trump supporter from Columbia has quite a unique pin on his coat! He told me his biggest issue for supporting the President is immigration. @KOMUnews pic.twitter.com/pieJjU5HpB

Doors don't open until 3:30, and the rally doesn't start until 6:30. The road to the airport is already backed up. pic.twitter.com/ZXyMa92oi8

While in Milwaukee, Obama spoke at a high school gymnasium.

As you can see, the place is half-full:

A reporter claimed the line to see Obama was a mile long:

People lined up for more than a mile in Milwaukee for Obama rally pic.twitter.com/qrXWlI1pnL

At the same time, Trump spoke to more than 18,000 people in Texas (with thousands more watching from screens outside).

Partitions were set up in Obama’s arena to make it appear as if the crowd was larger than it actually was.

Wow! Obama could not even fill a small pavilion in Vegas today! They had to partition it off… Sorry Barry, people can only take so many lies. #BlueRipple pic.twitter.com/9bmOSuscYp

2000 at Cox Pavilion, Las Vegas which has seating capacity of 2500-3100. Couldn't even fill it with help of special guests J Balvin, Salt-N-Pepa featuring DJ Spinderella, and DJ D-Miles https://t.co/6LSmXeIxjE

Rosen, by the way, was recently endorsed by The Las Vegas Sun after the publisher’s president maxed out donations to her campaign.

Obama once again took credit for the booming economy, noting that he’s a fan of facts and Trump is not.

Obama then claimed: “I don’t believe in just making stuff up.”

"Unlike some, I actually try to state facts," Pres. Obama says. "I don't believe in just making stuff up. I think you should actually say to people what's true." https://t.co/kg7dHnc6jh pic.twitter.com/CtKKn4VMDH

More on Rosen, via Free Beacon:

The editorial board for the Las Vegas paper published an endorsement with the title, “For US Senate, Jacky Rosen is our choice.” The endorsement praises the current congresswoman as a “throwback leader who worked across the aisle to an exceptional degree” and someone who will focus on issues that Nevadans care about deeply.

‘Pathetic!’ Rush Limbaugh Torches Obama Like Nobody Has, & He’s Spot On