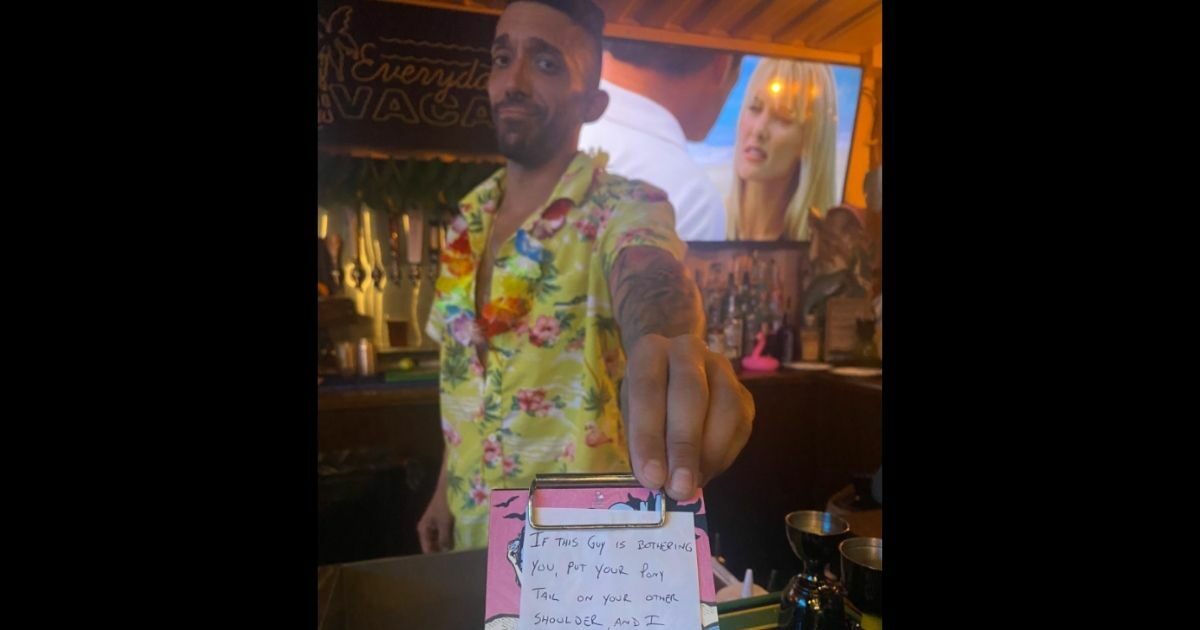 For many American women, a fun night at the bar can be ruined by idiot men who consider themselves attractive and suave but are really just thinking with their pants.

Fortunately, this all-too-common facet of American life can be mitigated by a bartender with a keen eye.

One such occurrence came about recently in St. Petersburg, Florida. Twitter user @trinityallie was at a local establishment with a friend on June 13 when a male stranger, who the New York Post described as an “unwanted pick-up artist,” started harassing the two women.

Thankfully, the bartender on duty, Max Gutierrez, handed Allie what looked to be a receipt, but was really a note.

“If this guy is bothering you, put your pony tail on your other shoulder, and I will have him removed. He’s giving ME the creeps,” the note said. The ponytail was indeed moved, and the wannabe ladies’ man was kicked out of the establishment.

This man was harrassssing me and my friend and the bartender passed this note to me acting like it was my receipt ! Legit the type of bartender everyone needs pic.twitter.com/kGTGekNFgl

The tweet quickly went viral, accruing over 217,000 likes as of Tuesday morning.

Several commenters immediately became suspicious of Gutierrez posing for a photo, wondering who would do that while kicking a guy out, but Allie quickly clarified in a reply to her original tweet that the photo was taken after the fact.

Four days after the tweet went viral, Gutierrez himself replied to Allie’s tweet and reported that the lone bachelor returned to the bar, only to be again removed from the establishment.

Hey that’s me! Lol
Fun update, the guy I kicked out Sunday night came back to the bar JUST NOW for a beer, told him I wouldn’t serve him. 🤷🏽‍♂️

Most of the comments, especially after the update, were overwhelmingly supportive of Gutierrez, with one commenter even noting, “Not all heroes wear capes. Some wear Hawaiian shirts.”

Not all heroes wear capes. Some wear Hawaiian shirts.

This guy is amazing. He is the example of caring for strangers because ver simply it’s the right thing to do! Restores my faith in humans! Good for you for making a big deal out of his wonderful actions.

Anyone trying to invoke a “Guy code violation” needs to recheck their guy code. Guy code would’ve been stoping that whole interaction before it got THAT far. Don’t let your bro embarrass himself and don’t let your bro be a creeper.
That bartender did what was right.

All in all, what was a horrible experience for two women just trying to enjoy a night out became a much better one thanks to the actions of our quick-thinking bartender.

If you ever feel uncomfortable at a bar, or require some form of assistance, order an “angel shot” and a bartender will escort you to your car. It could save your life.