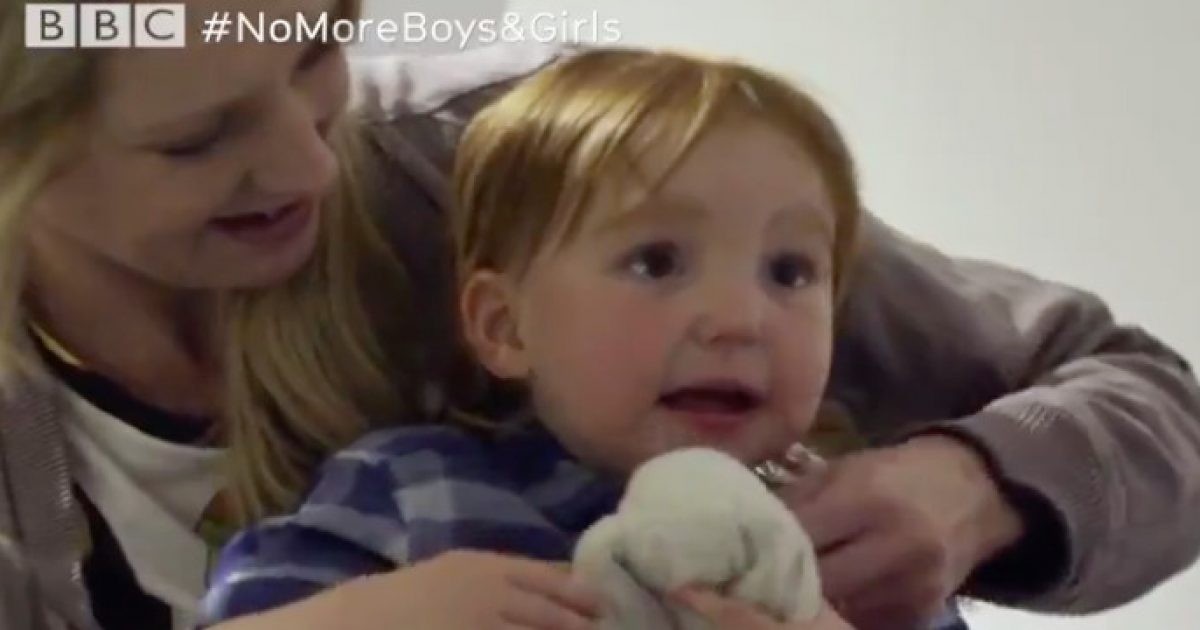 The BBC has decided to dive head first into gender confusion, kicking the insanity surrounding this topic to a whole new level thanks in large part to a new “test” they created to help parents find out if they “gender stereotype” their children.

As you can see, this world we now inhabit has gone completely nuts.

In the video, the children play with adult volunteers in an experiment to see if the volunteers display “gender-stereotyping.”

We see a woman carrying “Sophie” and placing him down on the floor, then saying, ”Would you like a dolly? There’s a good girl. You’re a good little girl, aren’t you, Sophie.” The woman sits on the floor with the boy, holds up a toy baby, then instructs, “Look, what does this say? Sweet dreams, sweet dreams.”

The screen reads, “The adult offers ‘Sophie’ a doll and soft toys … not the toys that teach spatial awareness or physical confidence.” The woman says, “I think she liked that pink dolly the best.”

A man confronts the woman and informs her, “If I were to tell you actually that Sophie is Edward, does that change anything?” The woman responds, “I maybe thought, ‘This is a little girl, so I have to give her little girl things.’”

Then the situation is reversed, as ”Oliver” is given a robot to play with as she plays with a woman on the floor. The man who spoke to the first woman says to the woman on the floor, “You’ve gone for, you could say, boy toys.” She responds, “Possibly my subconscious was automatically playing tricks on me.” When she is informed that “Oliver” is actually a girl, the woman says, “I suppose it’s because of the stereotype,” prompting the man to gleefully respond, “And then that changed your behavior towards the child.” The woman laments, “I can’t lie. It did.”

The volunteers wind up chastising themselves for not being more “open-minded.”

Say, isn’t the denial of the differences — biological, psychological, and theological — a denial of centuries of proven scientific fact? How can one, with a straight face, pretend these differences don’t exist, that becoming a different gender or sex is as easy as simply stating you’re a different sex? Come on now.

Surely it’s obvious how nuts this all sounds, right? It’s tragic that this is even a topic in the 21st century.

The bottom line is, God doesn’t make mistakes. He’s also made male and female different from each other and for a good reason. All of society is built on these differences and the two sexes coming together to take dominion over the world that God made. Without both male and female this is impossible.

The left is proving to be quite successful at subverting the natural order of things as a means to promote their agenda. For now.

Dan Rather Unloads on Trump For Attacks on Media, Take a Look at What He Said