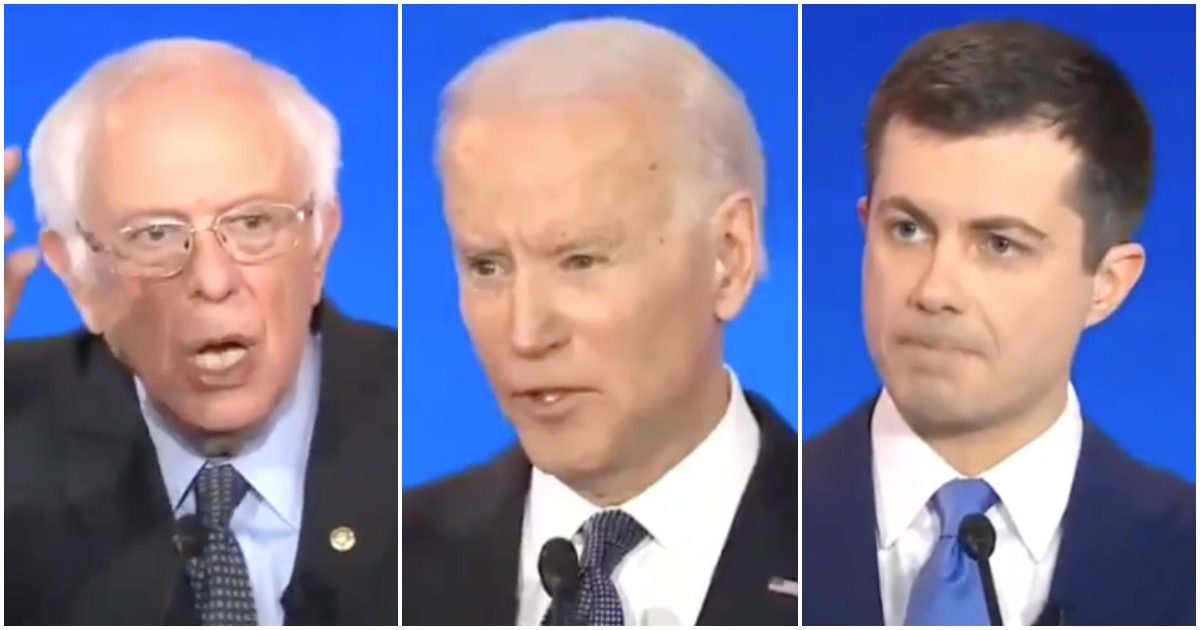 Why does Joe Biden wear an American flag pin on his lapel? Who does he think he’s kidding? Joe, Joe, Joe, you crazy cat. It’s like he thinks we can’t see right through him.

In case you missed it – and I’m positive you did – the Democrats held another debate on Friday. It was the opposite of riveting. Michael Bloomberg wasn’t on stage, not that you care. Just thought I’d throw that out there.

Check out Bernie, Biden, and Buttigieg saying they wouldn’t have taken out terror leader Soleimani if given the chance. They have to know that we know that they’re only saying this because Trump did it, right?

Pete Buttigieg says if he was president, terrorist leader Soleimani would still be alivehttps://t.co/xVJmOgtiEV pic.twitter.com/FE3YFyYExs

Joe Biden, who opposed the raid on Osama bin Laden, says he would not have ordered the strike on terrorist leader Soleimanihttps://t.co/5noRYCqs6w pic.twitter.com/PKHHGXSCWR

Would you have ordered the Soleimani strike?
Buttigieg: depends on the circumstances
Biden: no
Sanders: no
Everyone else: ?

Sanders wants to sit down with murderers of Americans like Obama did…. which allowed Soleimani to CONTINUE killing Americans. #Brilliant #FITN #NHPolitics #DemDebate

In 2004 cycle, Howard Dean's campaign imploded when he said we weren't any safer with Saddam dead. In 2020, no Democrat feels that they can risk claiming they would have ordered the killing of one of the world's worst terrorists.

Doesn’t Buttigieg understand that foreigners paint the U.S. in a negative light when they see Americans saying this kind of stuff about America?

Sure he does. He just doesn’t care.

Democrat presidential candidate Pete Buttigieg faced intense backlash on Thursday for appearing to suggest that the United States was at least partially responsible for Iran shooting down an Ukrainian passenger plane this week.

Buttigieg responded to Garrett’s reporting, which was featured in a tweet from CBS News, by writing, “Innocent civilians are now dead because they were caught in the middle of an unnecessary and unwanted military tit for tat. My thoughts are with the families and loved ones of all 176 souls lost aboard this flight.”

Buttigieg on Trump killing top Iranian terrorist Qasem Soleimani: “Taking out a bad guy is not necessarily a good idea."

Remarks from an event today in NH pic.twitter.com/DRakmHJP72

Uh, Pete, they weren’t “caught in the middle.” They were shot down BY IRAN. Military incompetence by the leading state sponsor of terrorism. Just because Dems hate Trump doesn’t justify false equivalence w/ Iran. Soleimani was a brutal terrorist who killed hundreds of Americans. https://t.co/KiGS8p5kHL

Democrats are fine-people-on-both-sides-ing Iranian terrorists to avoid siding with America because of their deranged hatred of Trump. https://t.co/1FFc9F0qIS

Iran launched a missile strike against our own troops, and then blundered by shooting down a civilian airliner when it wasn't even under attack. That's the story. This is on Iran. https://t.co/VzjnJk2jR8

Of course, the reaction to this moral equivalency will be indignation that anyone dare question his patriotism.

This isn't what happened. The Iranians knew they were about to proceed with a complicated military operation. The airport shouldn't even have been open. This is not "caught in the middle" of anything, it's a screw up by the Iranians. https://t.co/nqKD5hGY9n