It’s no secret that raging liberal entertainer Bette Midler — who is still fighting an uphill battle for relevance in modern America — hates President Donald Trump with a passion. After all, she’s made that very clear during her tirades on Twitter, the preferred platform for the hashtag activism of the Hollywood crowd.

Well, it seems her latest diarrhea of the fingertips — an updated phrase for a new, more technologically advanced world — involves boohooing about SCOTUS nominee Brett Kavanaugh , stating that women are the “n-words of the world.”

As you can probably imagine, this did not go over well.

“Women, are the n-word of the world,” wrote Midler in a now-deleted tweet. “Raped, beaten, enslaved, married off, worked like dumb animals; denied education and inheritance; enduring the pain and danger of childbirth and life IN SILENCE for THOUSANDS of years[.] They are the most disrespected creatures on earth.” 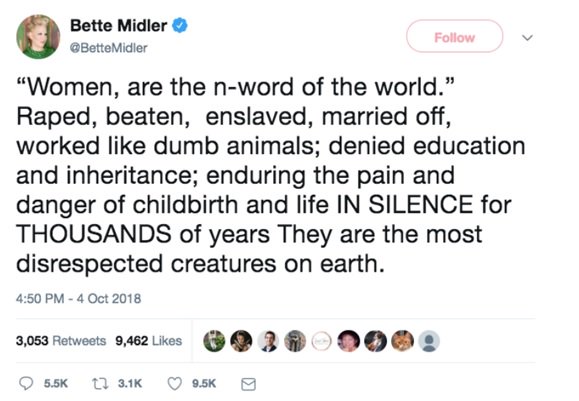 When doubling-down on the sentiment of the tweet, Midler claimed she was quoting Yoko Ono.

“I gather I have offended madny by my last tweet. ‘Women are the…etc’ is a quote from Yoko Ono from 1972, which I never forgot,” she wrote in another now-deleted tweet. “It rang true then, and it rings true today, whether you like it or not. This is not about race, this is about the status of women; THEIR HISTORY.”

Midler was swarmed with criticism until she eventually tapped out in submission and offered an apology. Here are some of those angry messages directed at the lefty actress (h/t Huffington Post):

This is why we can't have nice things. Black women were literally and LEGALLY property. Fact: Many white women owned/abused slaves right along with their husbands. Ever seen a lynching picture? Guess what you don't see: White women crying. Respect American History. @BetteMidler pic.twitter.com/AixOFYXYu8

Sexism is bad enough as it is.

Racism is a different bad thing.

Some people experience both.

@BetteMidler I see you have decided to double-down on this insensitive, ridiculous madness. Your arrogance and deliberate disregard for the experiences of Black women and by extension The Black community as a whole is breath-taking. Your privilege is showing! https://t.co/yUNGB69WUx

Later on the same night, Midler released a tweet apologizing for what she tweeted out.

The too brief investigation of allegations against Kavanaugh infuriated me. Angrily I tweeted w/o thinking my choice of words would be enraging to black women who doubly suffer, both by being women and by being black. I am an ally and stand with you; always have. And I apologize.

This is exactly why the vast majority of celebrities should be more cautious and careful how they use their platform when it comes to politics and other polarizing issues.

These folks, who are part of the deep left, tend to think that because they are fellow liberals that they can say whatever garbage they want and not be held accountable for it.

Obviously this is not true.

Maybe now that she’s been eaten by her own, she’ll take a step back from being so obnoxious.