There is plenty of talk in the 21st century about “fake news”, “alternative facts”, and good ol’ fashioned bias.  Maybe we have the internet itself to thank, as it allowed us to communicate in such a way that we could pull the wool away from each other’s eyes.

In either case, the public is growing increasingly aware of the inauthentic, and those whose lives depend on publicity should be very wary of faking anything.

But, as with almost all things in the Biden “White House”, caution has been thrown to the wind, (quotation marks intended).

The White House has developed a special video set for President Joe Biden events that are broadcast online or include video conferencing.

As Biden sat down in a chair and rolled up his sleeve to get his vaccine booster shot on Monday, the window behind him showed a beautiful view of the Rose Garden.

But the president was not even in the White House at all. It was all a carefully crafted illusion.

Instead he was on a new set in the South Court Auditorium in the Eisenhower Executive Office Building across the street from the actual White House.

The window view of the Rose Garden appears to be a digital screen – depicting what the view could theoretically be if you looked out of the White House. 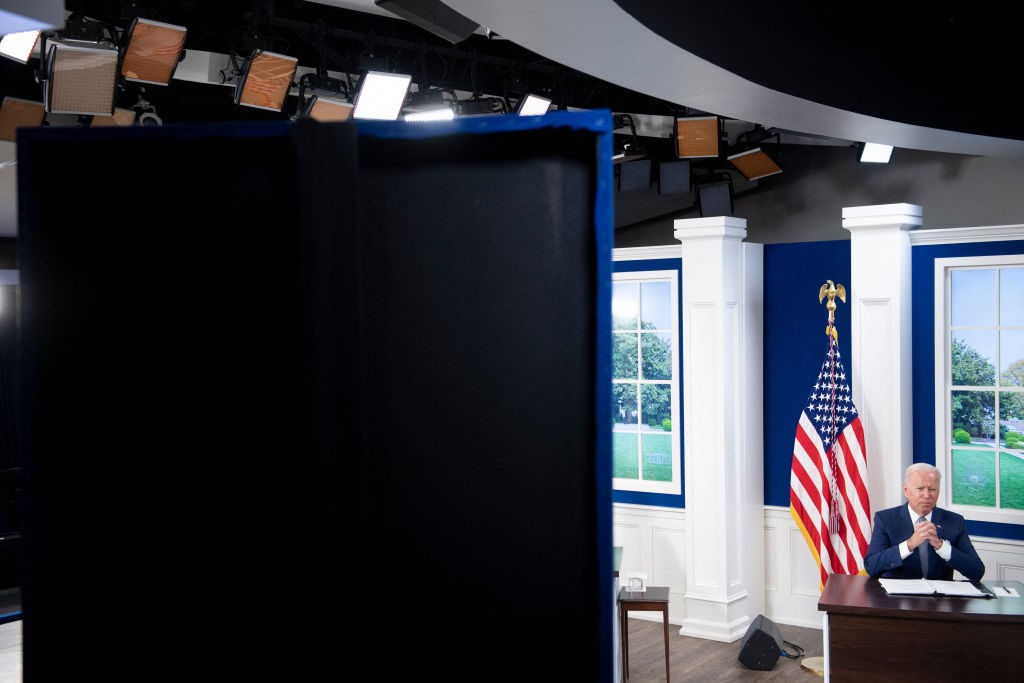 U.S. President Joe Biden convenes a virtual Covid-19 Summit on the sidelines of the UN General Assembly, on September 22, 2021, in the South Court Auditorium of the White House in Washington, DC. (BRENDAN SMIALOWSKI/AFP via Getty Images)

This of course renewed chatter about Biden’s carefully curated video set in the basement of his Delaware home, from which the pandemic-cautious future president broadcasted his campaign missives to the nation at large.