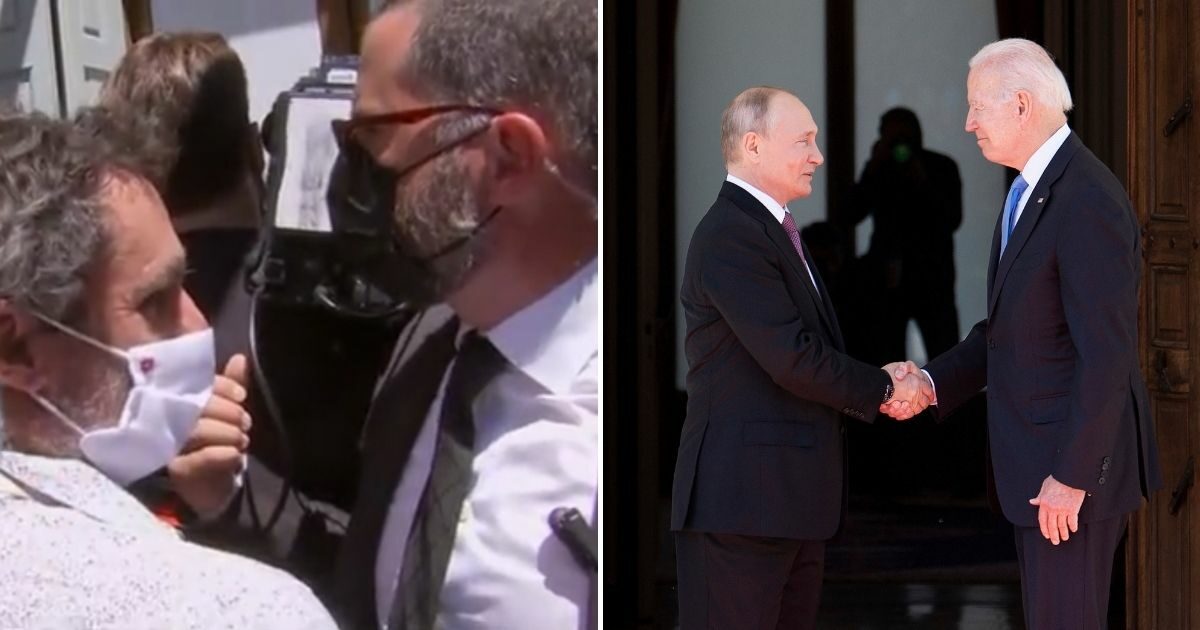 Many of the journalists assembled near the Putin-Biden Summit in Switzerland were shut out of the event after the American and Russian journalists present there engaged in a chaotic scuffle on Wednesday.

“There’s an extremely chaotic scene at the door,” said a pool reporter among the small group of journalists regularly accompanying President Joe Biden on his Europe trip, according to the U.K.’s Daily Mail.

Politico reported that when journalists reached the summit venue, the Villa La Grange in Geneva, U.S. and Russian officials stopped them, asking them to form two separate lines.

Instead, the journalists and officials began screaming while a Swiss official tried to ask those causing the commotion to silence themselves, the outlet reported.

Journalists were shoving and pushing one another, the Daily Mail reported, as they tried to get into the room where Biden and Russia’s President Vladimir Putin were present. The outlet reported that two American journalists claimed Russian officials tugged at their clothes while trying to push them out of the room.

According to the Daily Mail, despite attempts by White House officials to get more of the American media inside the room, only nine could enter.

However, the outlet reported that White House officials said both the U.S. and Russian delegations had agreed to have 13 reporters from both sides in the room.

When the yelling and shoving did not halt, Russian security officers reportedly pulled the red rope separating the dignitaries from the media to maintain distance.

The commotion went on as Secretary of State Antony Blinken, Russian Foreign Minister Sergey Lavrov, Biden and Putin looked at the group.

The Daily Mail reported that White House officials and journalists were shouting at Russian security officials, asking them not to touch the media members.

According to the outlet, the first session between the two presidents went on for an hour and 33 minutes before they headed to a bigger meeting between delegations from both countries.

The leaders then had a news conference, Putin speaking with journalists first.

Putin told reporters that the meeting with Biden was “constructive,” according to CBS News.

“It seems to me that we did speak the same language,” he added saying, “It certainly doesn’t imply that we looked into each other’s eyes and found a soul or swore eternal friendship.”

When reporters raised the question of jailed Putin critic Alexei Navalny, Putin responded by pointing to the United States’ treatment of those accused of being involved in the Jan 6. incursion into the Capitol, according to Yahoo News.

“People entered with some political demands at the Congress of the US,” Putin claimed, according to reporting from RT. “They are called domestic terrorists and they are accused of a number of other crimes. 70 people were detained right away after this event and 30 of them are still detained and nobody knows why and for what reason — because no official authority in the US informed anybody about that.”

He also reportedly pointed to the killing of Ashli Babbitt, saying, “One of the participants was shot by a police officer there and she didn’t threaten the police officer with a weapon.”

Biden spoke to reporters after Putin.

According to CBS, Biden told journalists that Putin “knows I will take action” in preventing Russia from engaging in alleged activities such as election interference and cyberattacks. Biden added that Putin “knows there are consequences.”

“We had covered so much,” Biden said in reference to the talks, CNN reported.

“So, there was a summary done by him and by me of what we covered. Lavrov and Blinken talked about what we covered. We raised things that required more amplification or we made sure we did not have any misunderstandings. It was after two hours there, we looked at each other like, ‘okay, what next?’ What is going to happen next is we’re going to be able to look back, look ahead in three to six months and say, did the things we agree to sit down and work out, did it work? Are we closer to a major strategic stability talks and progress? … That’s going to be the test. I am not sitting here saying because the President and I agreed we would do these things that all of a sudden it’s going to work. I’m not saying that. What I am saying is that I think there’s a genuine prospect to significantly improve the relations between the two countries, without giving up anything on principles and values.”

Biden said no threats were made during the meeting, according to CNN.

Senate Launches Plan to Create Extra Votes Just for Dems, End the Founders' Plan Once and for All