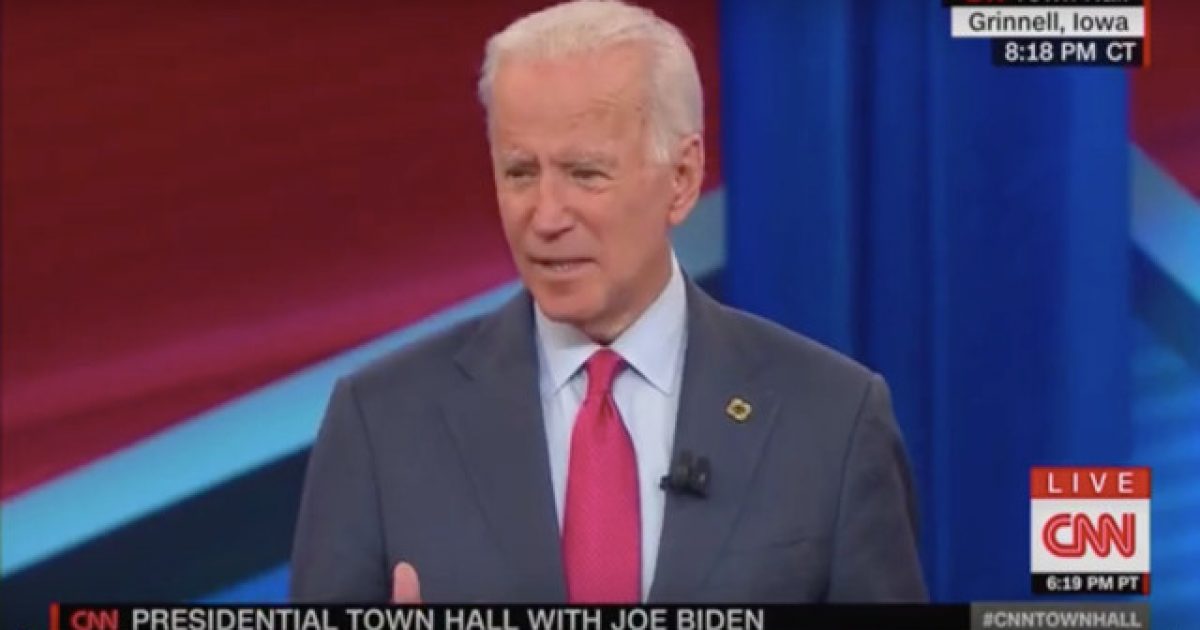 Former Vice President Joe Biden recently decided to take a swipe at President Donald Trump, claiming that politics would “whack” the commander-in-chief, leading many to wonder what exactly is meant by that particular comment.

Biden, 76, made the comment during a town hall special broadcast on CNN, in which he attempted to explain how modern day politics had gotten so out of control under Sen. Mitch McConnell and Trump.

“Politics today has gotten so mean and ugly and dirty and everybody questioning motive and not focusing at all on trying to put things together instead of disagreeing on substance, you go to motive,” said Biden. “It has become so, so difficult for Republicans to be able to, unless they have real courage, to stand up and take on the president even if they think he should be taken on.”

He went on to tie in McConnell and referenced his decision to block a vote to confirm Judge Merrick Garland to the Supreme Court. Biden claimed he suggested Garland to President Barack Obama because he thought Republicans would vote to confirm him.

“They know what they were doing was wrong,” Biden said.

He added, “The politics has gotten just so out of whack, but it’s going to come back and whack — heh — this guy.”

Some individuals were upset by the comment, claiming it was a joke about “whacking” — killing — the president. Others mocked Biden for the lame comment.

Joe Biden just made a joke about whacking @realDonaldTrump during his CNN town hall tonight.

"The politics has gotten just so out of whack. But it's going to come back and whack [laughs to himself] this guy." pic.twitter.com/yNQRFik3ua

This is what everyone on the streets is saying https://t.co/vg9VfEFOka

Biden is the current frontrunner in the Democratic Party presidential primary, though it’s been a fight and struggle for him to maintain that top spot in a crowded field that includes Sen. Elizabeth Warren and many others.

“Doctors For Assange” Concerned He May Die In Prison: “Effectively Been Tortured To Death”
February 18th, 2020 Sons of Liberty Media