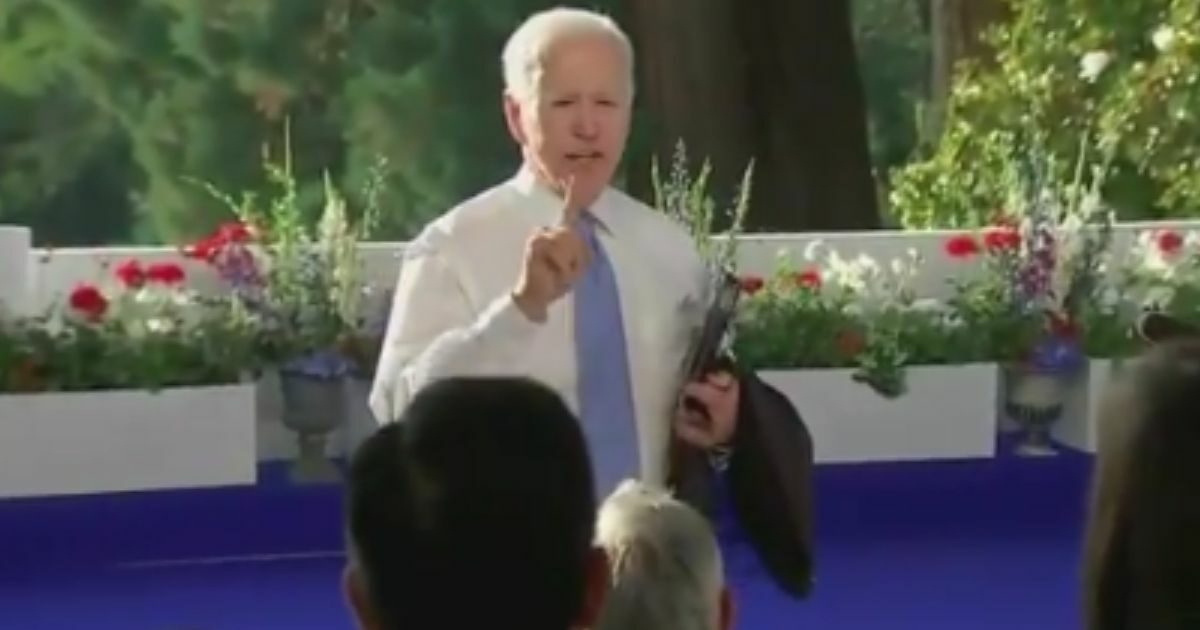 CNN sided with President Joe Biden over its own reporter Wednesday after he lashed out at her on foreign soil and pointed his finger at her while the world watched.

Biden is finally holding media briefings with some degree of regularity. But the 78-year-old often stammers, appears confused and is easily agitated.

Wednesday evening in Geneva, he channeled his agitation at CNN White House reporter Kaitlan Collins, who had asked him why he felt “confident” that Russian President Vladimir Putin would alter his behavior after the two met for around three hours earlier in the day.

Pres. Biden snaps at CNN’s Kaitlan Collins who asks why he is so confident Russian Pres. Putin will change his behavior:

“What the hell? When did I say I was confident? … If you don’t understand that, you’re in the wrong business.” pic.twitter.com/UBxFao4PTG

“I’m not confident he’ll change his behavior. What in the hell?” Biden said to Collins. “When did I say I was confident?”

“What I said was — let’s get this straight — I said what will change their behavior is if the rest of the world reacts to them and it diminishes their standing in the world,” Biden added, pointing a finger at her. “I’m not confident of anything. I’m just stating the fact.”

Noting that Putin’s own solo media briefing sharply contrasted in tone to Biden’s, specifically with regard to potential cyberattacks originating from the country, Collins asked, “So how does that amount to a constructive meeting?”

“If you don’t understand that, you’re in the wrong business,” Biden lashed out.

Did CNN stand up for its reporter — the very same reporter who so often twisted the words of former President Donald Trump? Of course not. In fact, CNN’s on-air lapdogs praised Biden for being so tough, which he isn’t.

Immediately following Biden’s frustrated meltdown, CNN reporter Jeff Zeleny was asked to evaluate the media briefing by anchor Wolf Blitzer — who did not at all appear bothered to have seen his colleague stripped of her dignity in front of the world.

Right after end of presser and before the nonpology, CNN’s Jeff Zeleny, who Wolf notes was listening “closely,” talks about Biden answering questions and really takes him to task for being combative with Kaitlan Collins.

“Wolf, it was clear when President Biden was answering Kaitlan’s question there, he said he’s not confident at the behavior of President Putin. But one thing he is confident, [is] in his new role on the world stage. As he considers the last several days — the last week, indeed — of traveling across Europe, really leading him to this point, he is leaving his first foreign trip declaring it a success or at least on the pathway to it,” Zeleny said.

“Wolf, it is quite striking to just see the confidence in his approach, in his tone, as he really handles all of this,” he added, noting Biden even took off his jacket. “He certainly was comfortable in that moment.”

Yes, Biden certainly did look comfortable tearing into a CNN reporter, who asked a question not related to ice cream, even if her network is little more than a part of the disinformation apparatus for the White House.

But CNN could have at least made an attempt to pretend that it is in the middle and only there to report facts. Democracy dies in darkness, right? A president being combative with the media is morally reprehensible, according to what we were told by the establishment media when its reporters spent four years putting their full weight into being the Trump administration’s key opponent.

Zeleny’s only comments directly related to seeing his colleague humiliated came later, when he noted that those close to Biden like to keep him away from fielding questions from those who are not pre-screened.

“What we have not seen him do is answer questions like that without his aides screaming at him to stop. I have never seen a president, covering the last four of them, who is so protected by his aides in terms of often not wanting him to answer some questions,” Zeleny said.

CNN on Biden: “I have never seen a president… who is so protected by his aides in terms of often not wanting him to answer some questions.”

How brave of Zeleny and the rest of his comrades to take a stand against an agitated Democrat going off on a woman who had asked a question of Biden that required critical thinking to answer.

Calling himself a “wise guy,” Biden even attacked the media as a whole later when apologizing for the meltdown on Collins.

“Look, to be a good reporter, you’ve got to be negative. You’ve got to have a negative view of life, it seems to me,” Biden said before leaving Geneva. “You never ask a positive question.”

“Look, to be a good reporter, you’ve gotta be negative. You’ve gotta have a negative view of life, it seems to me … I apologize for having been short” — Biden on Kaitlan Collins’s question and his response to it pic.twitter.com/2mHvKkPz7X

In this case, one reporter asked a legitimate question with no apparent malice behind it, which wouldn’t have been the case had Trump been standing up there, and Biden flipped his lid.

What did CNN do? Biden’s lapdog network praised him for his confidence.