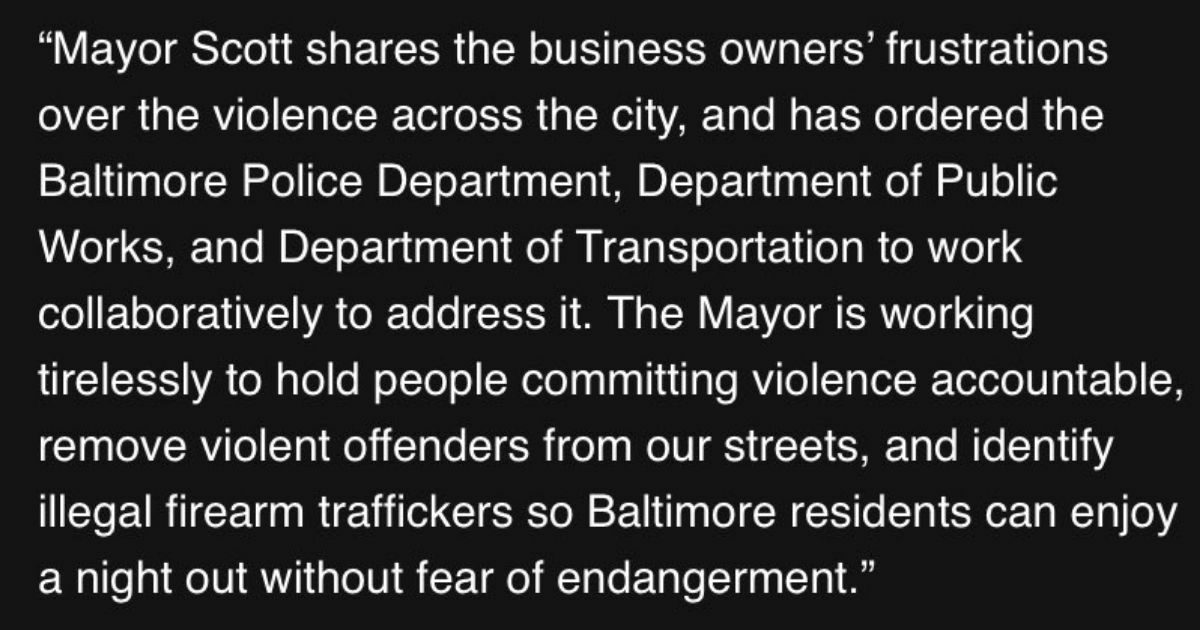 Days after businesses in the Fells Point section of Baltimore threatened Mayor Brandon Scott and other city officials with withholding taxes amid a crime wave, a police command post was set up in the neighborhood.

According to WBFF-TV, a mobile command center was set up.

Police Commissioner Michael Harrison on Thursday had promised an increase in officers and foot patrols as well as support from other police agencies.

“I want them laser-focused on scanning for weapons and potential incidents,” he said during a Thursday town hall that came two days after businesses demanded action.

“When it comes to prostitution, public urination and defecation, and the illegal sale and consumption of alcohol and illicit drugs on the streets, we know these crimes are not as serious as the carjackings, shootings, and homicides that have become routine,” the business owners wrote.

“But, as this past weekend proved, a culture of lawlessness rarely remains confined to petty offenses and invariably leads to the kinds of violence and tragedy we witnessed late Saturday night.”

“So, to compel our leaders to do their job and to stand up for neighborhoods all across Baltimore, the undersigned parties are prepared to withhold our city taxes and minor privilege and permit fees and place those funds into an escrow account, which we will not release until and unless basic and essential municipal services are restored,” they added.

The response left some unhappy. WBAL-TV said some business owners told the station that road closures and increased security may keep customers away.

Others said the police presence was welcome.

“I’m really glad that it’s here. I personally have never experienced any bad things, but after seeing the videos, I was very concerned and I kind of made the decision to not come down here again, and then I thought, ‘Well, you want to support your city,'” said resident Renee Bicknell.

One commentator said security is essential for an economic revival.

“You hear a lot of suburbanites say we don’t come to Baltimore City anymore. They actually sometimes say it with pride. It’s not something to be proud about, but it does hurt business. The fact that these issues of violence have become more prominent in Fells Point is a real problem not just for Fells Point but the broader city,” economist Anirban Basu said, according to WBFF-TV.

“What are the three industries that were really hurt by the pandemic? Retail trade, restaurants, hotels. What does Fells Point offer to visitors? Largely retail, restaurants and hotels. The industries are trying to bounce back from this pandemic are most hurt by these types of events,” he said.

Business owner Nick Johnson said the response to the letter might have been an over-reaction, according to WBAL-TV.

Johnson noted that the police mobile command center was parked in front of his restaurant.

“I hope this was just a convenient parking space for them,” Johnson said.

“I hope this isn’t some sort of petty thing, and I hope this was just a convenient parking space for them.”

He said businesses wanted to be protected, not smothered.

“As a result of our letter, somehow, it was conflated to, ‘Let’s add more barricades, let’s increase the scope of the closures and let’s bring a police force into this community.’ It’s not what we want. It’s not what we asked for,” Johnson said.