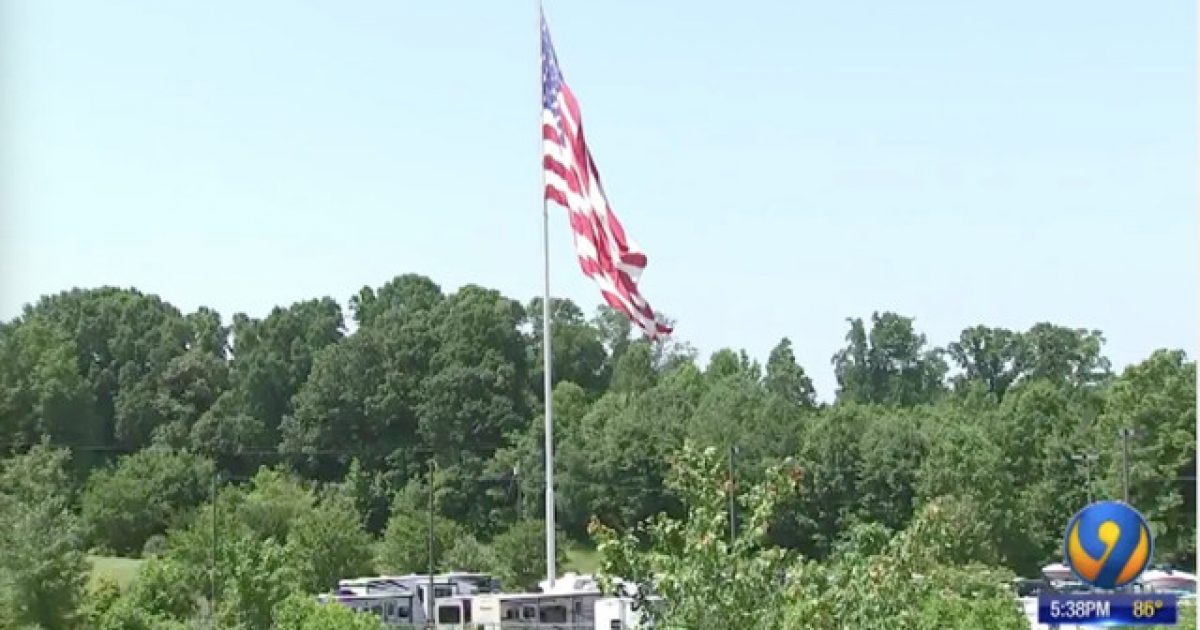 Marcus Lemonis, CEO of Camping World, recently stated that he’d rather be tossed behind bars than to remove the enormous American flag that flies high and proud outside of his RV store in North Carolina.

Back in May, Lemonis said he would not be taking the 40-foot by 80-foot banner, despite the lawsuit filed by Statesville, North Carolina, and accumulating a rather hefty amount of fines for flying the flag.

During a Monday interview with Fox News’ Martha MacCallum, Lemonis insisted that he would not be pulling down the flag anytime soon.

“The ordinance doesn’t matter to me,” he told MacCallum. “If you look at the North Carolina statute, it says as long as it’s not impairing someone’s health and well-being, it’s not a big deal.”

Lemonis also revealed that local lawmakers told him that the flag could be dangerous because of its size and its close proximity to the interstate.

“They made the claim it could cause an accident on the freeway because it was too distracting — it was too beautiful,” he added.

“There’s no question that I violated that ordinance,” he admitted. “When veterans show up at the stores for the flag-raisings, and when they come on Saturdays and do their veteran rides, they will weep at the bottom of the flagpole. That’s the conviction that I need to say it’s just not going to come down.”

“I would rather to go jail,” Lemonis declared. “The city of Statesville filed a lawsuit about two months ago. If I don’t take it down, I will be in violation of the court order.”

Lemonis is absolutely right. This is about more than just being a rebellious citizen. It’s about the right a man has to fly the flag of the country he’s proud of without the government stepping in and ordering him around.

People need to take responsibility for themselves and learn how to drive safely and ignore things they may see on the side of the road. How many billboards are posted along roads that are well done and could be considered distracting?

Yet, strangely, these billboards are still up. Maybe it’s because folks stand to make a substantial amount of money from advertising by allowing these banners to stay up.

This is government trying to play nanny again. Good on Lemonis for standing up for what he believes in and refusing to allow big government intrusion to ruin his patriotism.

Hispanic Pastors Pay A Visit To Border Facilities. What They See Proves AOC And Leftist Media Aren’t Telling The Truth.

Dem Rep. Says People ‘Should Be Prosecuted’ If They Criticize Members Of Congress Online [WATCH]