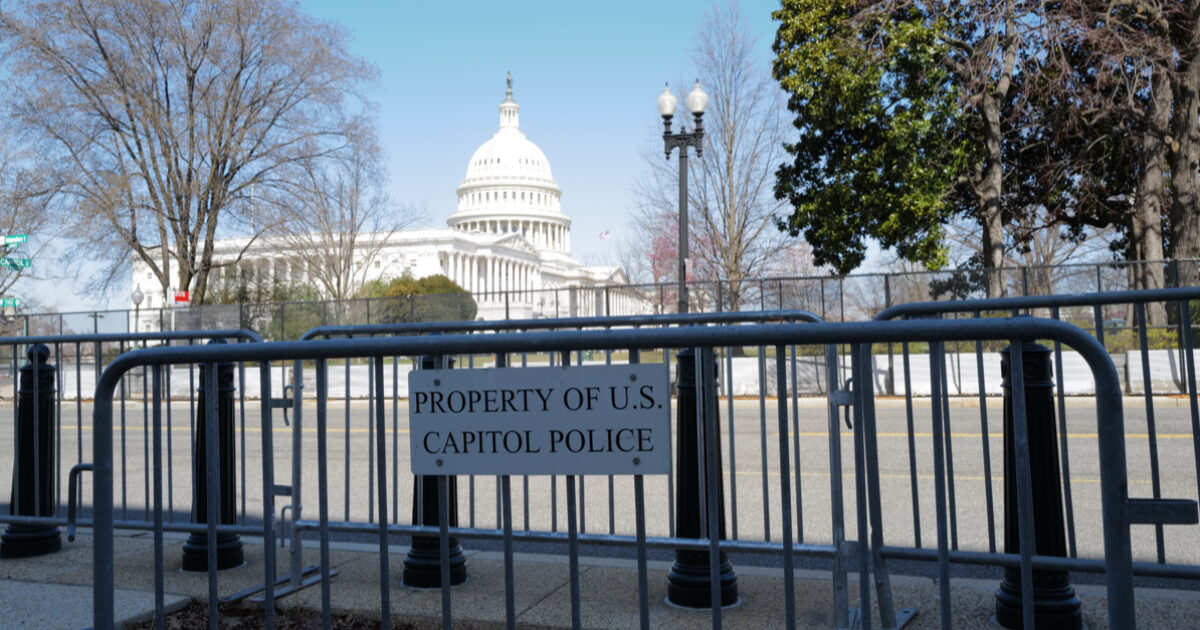 The U.S. Capitol Police will soon be using military surveillance equipment to monitor Americans as part of a larger effort to improve security and become “an intelligence-based protective agency” in the wake of the January 6 riot. It’s strange that the lawmakers on the left who scream with their hair on fire that the police are becoming “militarized” apparently have no problem with this move, perhaps because the Capitol Police reports to the Speaker of the House, Nancy Pelosi. Capitol Police PSSG-M

According to a June 2nd Pentagon press release, the PSSG-M units will be integrated into the surveillance system that is already in place in D.C.

Army personnel will be installing the cameras and train USCP or “authorized contractors” to operate the systems.

Under this arrangement, the DoD will provide eight Persistent Surveillance Systems Ground – Medium (PSSG-M) units, on a reimbursable basis, for a period of one year. The Army will install the units and will train USCP personnel or authorized contractors to operate the systems. Except for required maintenance of the systems, no DoD personnel will operate the PSSG-M units.

Does that bother you just a wee bit?

Do you have questions about how the USCP will be using this equipment to “identify emerging threats” and precisely how they will be monitoring Americans? What about data collection and distribution, and what that means for your privacy rights… are you wondering about that? Will they have to go to a judge and get a search warrant before they start spying on and/or storing information about an American citizen?

Well, it looks like the USCP isn’t going to alleviate your concerns.

The Capitol Police did not provide further details regarding how or where the surveillance equipment would be used and didn’t provide information on whether data collected would be stored or distributed.

…A report from Roll Call last summer noted that the USCP is currently exempt from the Freedom of Information Act (FOIA) because it is part of the legislative branch, giving it a level of secrecy and a lack of established accountability methods that aren’t the case for other law enforcement agencies.

“Congress is not subject to the law, and the Capitol Police, as a component of the legislative branch, is also exempt from any FOIA request,” the report stated.

In other words, they report to Nancy Pelosi, who doesn’t give a rat’s arse about the bill of rights.

If you thought that calling the January 6 riot an “insurrection” was just a one-off, you’re sadly mistaken. According to Pelosi, if a Republican passes gas, it’s an attempt to overthrow the government.

Pelosi is the leader of the leftist haters comprised of most of the Democrats, some squishy Republicans, the Deep State, Big Tech, and the Corporate Media. These haters haven’t finished using the riot on January 6 as a cudgel to beat down half of the country that voted for the Bad Orange Man or believe in the constitution and fair elections.

For the past six months, these leftists have said that the riot on January 6 was the worst thing that happened to the United States since the Civil War. They’ve been saying it was worse than Pearl Harbor, 9/11, New Coke, the assassinations of Abraham Lincoln and JFK, the movie Ishtar, and every other horrid thing that happened in this country.

The BLM/1619/George Floyd riots that actually killed people, however, were “fiery, but mostly peaceful” protests.

The “autonomous zones” where first responders weren’t allowed to enter, the 100+ days of attacks on a federal courthouse in Portland, and the massive protests when Trump won in 2016 and on Inauguration Day in 2017, and the inflammatory speeches at the Womens’ March were not examples of “insurrection,” however.

We have been told over and over that the biggest threat isn’t any of that, or the rise of Antifa, or blatant antisemitism, but “white supremacy,” which these leftwing nutters claim is synonymous with “conservativism.” It’s just absurd. Burgess Owens said that Democrats are “the party that was part of slavery, KKK, Jim Crow, that has killed over 40 percent of our black babies, 20 million of them.” He’s right.

The police are now being used by the left to combat this alleged “threat to democracy” using military spying equipment against Americans.

The people cheering on the U.S. Capitol Police using cameras from the Army to monitor Americans to keep lawmakers “safe” from the threat of MAGA hat-wearing “insurrectionists” with Lego sets are the same people that said that Trump was an authoritarian.

It should be pretty clear to everyone by now that this is partisan, especially when one realizes that the organization using the spying equipment reports to Nancy Pelosi.