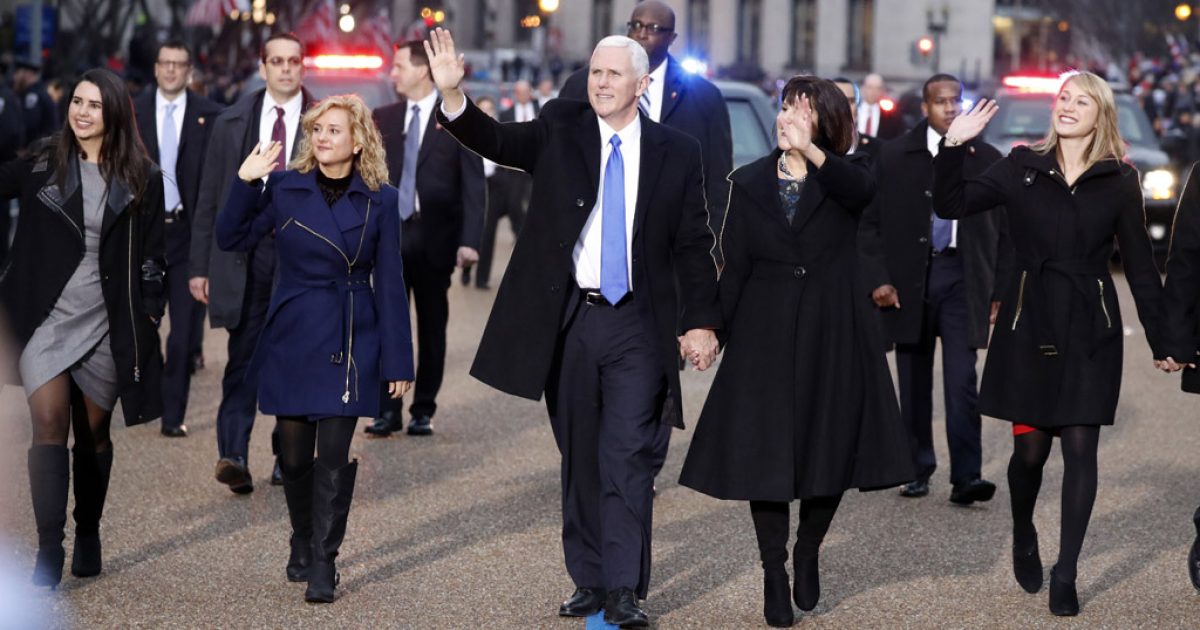 Many Christians across the nation identify closely with the deeply faithful Second Family, led by outspoken Christian and Vice President Mike Pence.

The Pence family have been outspoken proponents of biblical values and rarely shy away from publically declaring their faith in the Lord Jesus Christ.

Vice President and Karen Pence have even been criticized and some would say mocked for their close adherence to strict standards for how they spend their time with members of the opposite sex, but in today’s hyper-sexualized world where the bonds of marriage are often belittled, many admire the Second Couple’s commitment to their clearly strong marriage.

Together, they’ve raised three children, and some Pence critics may be surprised to find that when it comes to faith, they’ve always encouraged their children to find their own path.

This, of course, will likely add to the respect many Christian parents may already feel for the Pence family, as while we may all worry about our children’s salvation, at the end of the day, all we can truly hope and pray for is that they find their way to the Throne of Christ in a truly authentic way.

This is what happened to Charlotte Pence, the Pences’ 25-year-old daughter, who details the twists and turns her path to faith has taken in her life, and what ultimately led her to a solid faith in Jesus in her recently-released book, Where You Go: Life Lessons From My Father.

In an interview with Christian Post, she shared how despite an upbringing that was immersed in biblical values, she still had to find her own way to His throne:

Having gone to DePaul University in Chicago for undergraduate studies, Pence spent her junior year studying at the University of Oxford in England in 2015. Her experience at Oxford is one in which she has blogged about but also one that caused her to seriously question the religious beliefs and traditions in which she was brought up.

While at Oxford, Pence admits that she “turned away from God” and had “not wanted anything to do with religion.” But at the same time, she felt like God was coming after her.

In a chapter titled “Let Your Faith be a Uniting Force,” Pence recalled that she was “floating” on her own without God and thought she was fine during her time at Oxford.

“I had become interested in atheism and spent much of the year reading from thought leaders in this area,” she wrote in the book. “I was interested in other types of ideas, ones I had not been raised in. I stopped going to church and reading my Bible.”

Pence added that she even avoided seeing “religious friends” and “wanted to do life without God.”

“I believed I didn’t need him but as the year went on, I felt increasingly hopeless,” Pence wrote. “I think I still believed in God, but I wanted to try living without the burden of religious ideas. I thought my questions would go away or be answered. I thought maybe I would no longer care and I would be able to live in an agnostic way. Maybe a part of me even wished I could, but atheism didn’t answer any questions I had.”

Through this time, Pence credits her parents’ for their patience and understanding as she grappled with these topics.

“They were definitely very understanding,” she said. “I know that they have always shown me just what an example of unconditional love really looks like. They were always willing and open to talk about any questions I had about their faith. They were definitely present in my life at that time. Ultimately, my faith had to just become my own and once it did, there was really no going back for me.”

Pence says that reading theologians like C.S. Lewis and Alister McGrath helped her find her way back to God, but a family trip to Israel during her time at Oxford had the biggest impact.

“I believe it was my time spent in Israel where I truly became a Christian, where my faith was solidified for me,” Pence wrote. “I had always had faith, but it became my own there and I have never really turned back since coming into this realization.”

In Israel, many of the people no matter their religion “acknowledge the truth of the history of the Bible,” she noted.

“They recognize the events took place,” she said. “They just don’t necessarily agree on all the details.”

“I felt a serious camaraderie and connection with these people,” she added. “It was as if we were all on the same journey, and we had converged on one path for a particular point in time. I walked down that path and listened to their stories and experiences. We discussed the importance of faith in each of our lives and found commonality in our shared traditions.”

She said that it was on the plane ride back, she found herself turning back to God, and asked Him to take her back.

I was on a plane, listening to a religious song, and I began to cry,” she explained. “In that moment, I came home to my Savior, to my friend, I understood. I needed Him and He took me back with open arms. This incredible feeling of acceptance and renewal is one I can not put into words, I cannot recreate, I cannot justify. It just is. It is a free gift, and one I cannot live without. And I have never been more sure of anything.”

As parents, it is our job to lead our children in the way they must go, but their relationship with Christ is one that they will eventually forge for themselves. It is our job to be there and love them unconditionally no matter what twist and turns that path may take.

After Their Father Passed Away, This Teacher Took His Former Student to Father-Daughter Dance