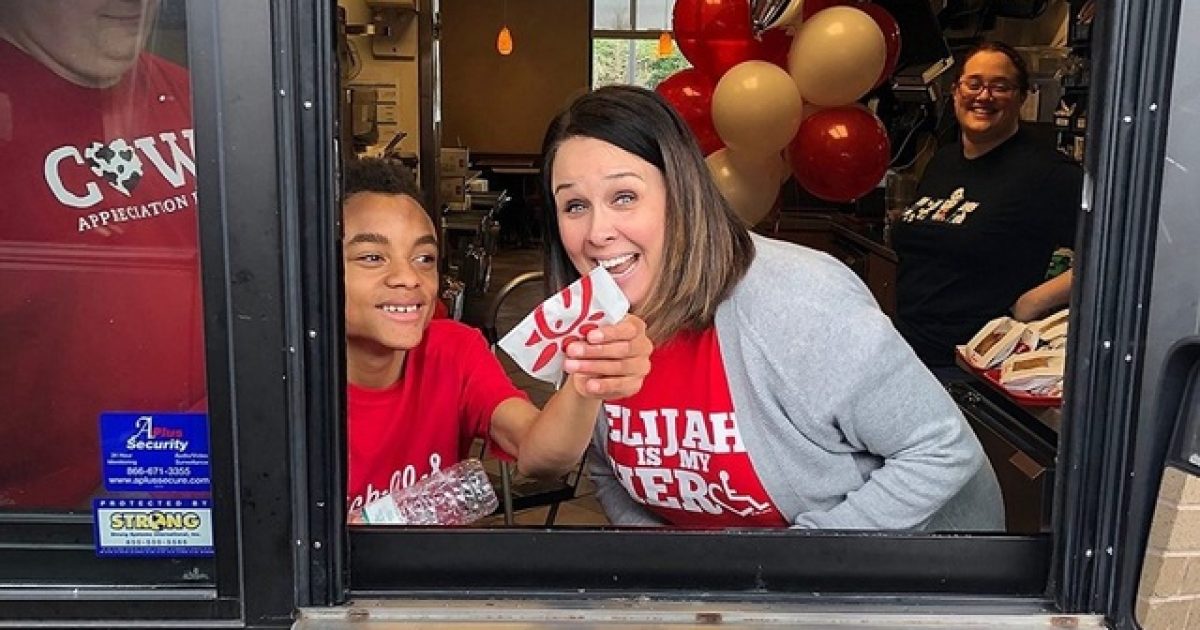 Fans of Chick-fil-A in the Mobile, Alabama area might have been a little confused when they saw a line of cars at the drive-thu this past Sunday. While the fast food giant shutters its doors in honor of each Lord’s Day, it has been known to make a few special exceptions.

Parents of children with special needs aren’t strangers to needing a little extra accommodation, but sometimes it can be hard to reach out and ask for it. Chick-fil-A, on the other hand, is no stranger to going the extra mile for their customers in big or small ways.

So, when 14-year-old Elijah Sprague had a unique birthday dream on his heart, Chick-fil-A was an answer to prayer.

Elijah was born a micropreemie at just 22 weeks gestation. His biological mother gave birth at home shortly before transporting him to the NICU at University of South Alabama Children’s and Women’s Hospital, where Rene Sprague was working as a nurse.

During Elijah’s six-month stay in the NICU, his care team discovered several brain bleeds that eventually led to cerebral palsy and autism. Elijah was slated to be placed in foster care upon discharge from the hospital, but Rene and her husband Patrick stepped in.

“We decided to take him,” she recalled. “He was ours the minute we brought him home.”

Due to the severity of his condition, a neurologist warned the Spragues that it would be a miracle if Elijah saw his first birthday. By the grace of God, Elijah did have his first birthday, and his second, third, fourth, all the way up to last week when he celebrated his fourteenth birthday.

There are many things Elijah loves, his mom shared with AL.com, but Chick-fil-A and its drive-thru rank pretty high on the list, so it seems like providence that his uncle, Walt Gilstrap, happens to be the manager of one of the restaurant’s Mobile locations.

When Rene asked Walt if they could blow Elijah away with a Chick-fil-A birthday party at the restaurant outside of business hours, she was thrilled that he, and the restaurant’s owner Glen Rosson, said yes!

Walt and his girlfriend went in early to make cookies that Elijah proudly handed to his friends, along with drinks, through the drive-through window. Elijah received his own Chick-fil-A polo shirt and a name tag, and his guests came inside to play in the indoor playground.

Since his party, he keeps asking to go back to see “Walk,” as he calls his uncle, at “Lay,” as he refers to Chick-fil-A.

“He’s a really funny kid,” [Rene] says of Elijah, whose actual birthday was Jan. 4. “We have a great community of people who support him.”

Could Chick-fil-A possibly do anything to make us love them more? What an incredible blessing to this young man!

This WWII Vet’s Daughter Called Out For Help, Then He Got The Biggest Birthday Surprise Ever