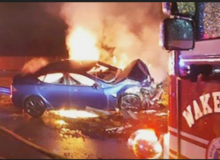 Here on earth, there appears to be no limit to the sort of selfish depravity being expressed by the Chinese government.  They’ve long been exerting their ample economic force on the world at large, hoping to influence global culture in such a way that their authoritarian communism won’t be spoiled by outside forces or media.

But there are now fears that China’s hopeful scope of influence may be aimed at areas off-planet as well, and one of NASA’s most important leaders is sounding the alarm.

The head of Nasa is worried China may claim the moon as its own territory – and prevent the US from landing there again.

‘It is a fact: we’re in a space race,’ the current Nasa Administrator, Bill Nelson, said in an interview.

‘And it is true that we better watch out that they [China] don’t get to a place on the moon under the guise of scientific research.

‘And it is not beyond the realm of possibility that they say, “Keep out, we’re here, this is our territory,”‘ Nelson added.

And it’s not as though China hasn’t expressed these sorts of things before.

‘If you doubt that, look at what they did with the Spratly Islands,’ he said in the interview with Politico.

China has certainly built a reputation that is self-centered enough to put this in the realm of possibility, and it appears as though NASA would like to get out ahead of any potential trouble.