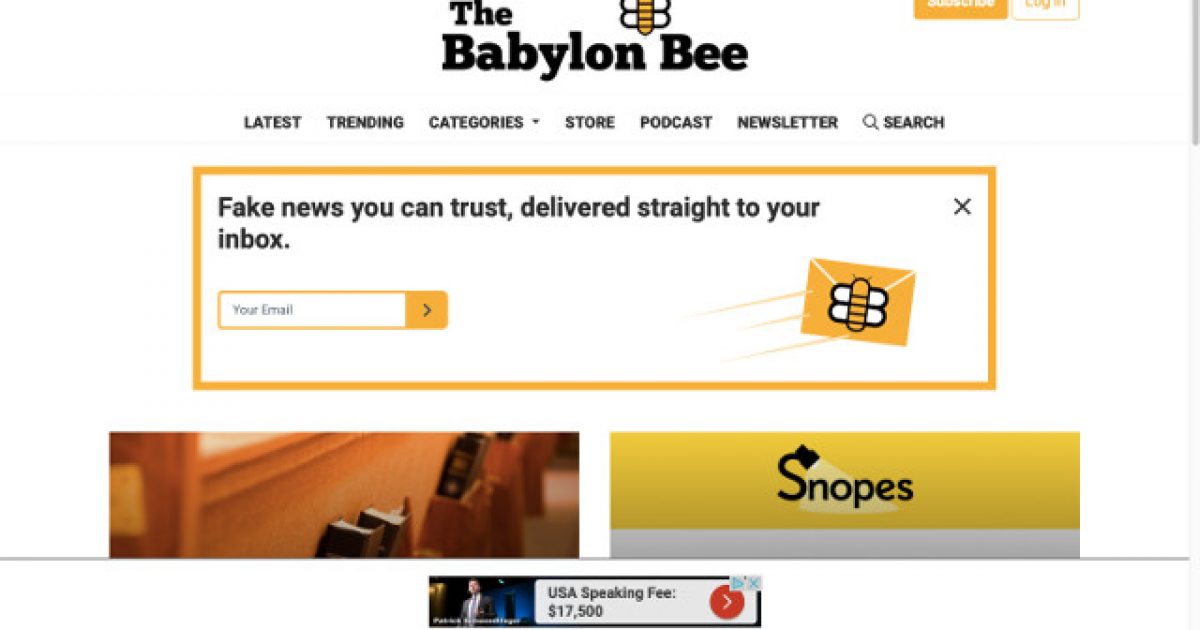 Hilariously funny Christian satire site, the Babylon Bee, decided they had enough shenanigans from Snopes, the self-described “fact checking” site and the ongoing smear they launched against them, so they lawyered up, and boy, it didn’t take long for Snopes to change their tune.

This just goes to show that we as conservatives and Christians shouldn’t be taking the attacks left-wing media launch at us lying down. The more we fight back, the more they surrender.

“Last week, Snopes fact-checked us again,” the Bee told its readers Monday (h/t Ed Morrissey). “We’re pretty used to that. But this time, instead of merely rating the article ‘false,’ they questioned whether our work qualifies as satire, and even went so far as to suggest that we were deliberately deceiving our readers. Basically, they treated us as a source of intentionally misleading fake news, rather than as the legitimate, well-known satire publication that we are. This is a big deal.”

The reason it’s a “big deal,” the site goes on to explain, is that Snopes has been given significant power over how platforms — particularly Facebook, for which Snopes has served as one of its “fake news” monitors — handle posts:

As you know, fake news—which is distinguished from satire by its intent to mislead—was widely considered a serious issue in the last election cycle. As a result, social media networks like Facebook began partnering with fact-checkers to try and limit the distribution of fake news on their platforms. Snopes was one of them. At one point, a piece of ours was rated “false” by Snopes, prompting Facebook to threaten us with limitations and demonetization. We made a stink about this, and after some media attention shed light on the problem, Facebook apologized for their handling of the matter and admitted that satire is not the same as fake news.

We came out on top last time, but this latest smear from Snopes is both dishonest and disconcerting. We have no choice but to take it very seriously. For better or worse, the media, the public, and social networks all look to Snopes for authoritative answers. By lumping us in with fake news and questioning whether we really qualify as satire, Snopes appears to be actively engaged in an effort to discredit and deplatform us. While we wish it wasn’t necessary, we have retained a law firm to represent us in this matter.

Here’s what Snopes edited out of their smear against the Babylon Bee:

We’re not sure if fanning the flames of controversy and muddying the details of a news story classify an article as “satire.”

While this real-world incident stirred up a good amount of online anger, it wasn’t quite outrageous enough for the entertainment website Babylon Bee. In an apparent attempt to maximize the online indignation, this website published a fictionalized version of the story, changing the location to Chick-fil-A, a fast-food restaurant known for its CEO’s opposition to same-sex marriage […]

The Babylon Bee has managed to fool readers with its brand of satire in the past.

So basically, Snopes decided to back down after catching a bunch of flack for their dishonest attacks against the Babylon Bee, hoping to avoid further legal troubles, thus proving they knew from the get-go what they were saying was biased and untrue.

If there are people out there who can’t understand basic sarcasm and satire, that’s their problem. The Babylon Bee has not been shy about coming out and making it clear they are a satire site. Those who don’t know this already could do a quick search for information and see that’s the case.

Have we become so lazy these days that we don’t want to put in a little effort to fact-check our own news sources? That’s quite sad, don’t you agree?

Rep. Tim Ryan Disrespects Country And All It Stands For During ‘Star-Spangled Banner’