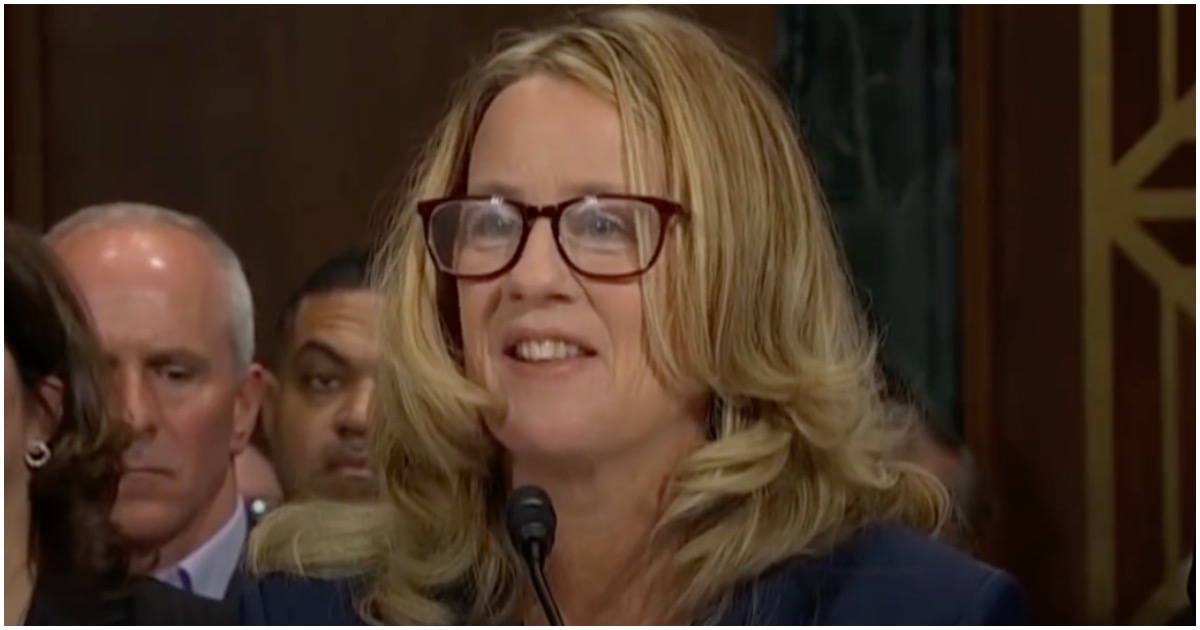 A pro-Christine Blasey Ford person (or people) vandalized the steps of Yale Law school with a quote from her testimony.

This should never happen.

The entrance to Yale University Law School, one of the most famous and respected law schools in America, was tagged with the words of Dr. Christine Blasey Ford on Monday morning.

“Indelible in the hippocampus is the laughter…” reads the white graffiti on the paving stones outside the Sterling Law building on Yale’s campus in New Haven, Connecticut.

The quote is taken directly from Ford’s testimony last month during the confirmation hearing for Supreme Court Justice Brett Kavanaugh, a 1990 graduate of Yale Law. In her testimony, Ford described what she says was Kavanaugh’s sexual assault of her when they were both in high school in 1982.

“Indelible in the hippocampus is the laughter, the uproarious laughter between the two, and their having fun at my expense,” Ford said in response to a question from Sen. Patrick Leahy (D-Vt.) at her testimony, referring to Kavanaugh and his friend. “I was underneath one of them while the two laughed. Two friends having a really good time with one another.”

Entrance to the Yale Law School this morning pic.twitter.com/vRIlGyKRsT

Ford was recently nominated for a distinguished award.

Christine Blasey Ford, the college professor who accused now-Supreme Court Justice Brett Kavanaugh of sexual assault while they were in high school, has been nominated for a distinguished alumna award at her alma mater.

Ford was nominated for the award by a professor at University of North Carolina-Chapel Hill, where she earned an undergraduate degree in experimental psychology in 1988.

In a letter obtained by The Hill, Jennifer Ho, a professor in the university’s Department of English and Comparative Literature, said Ford did “something that was extraordinary” earlier this year when “she told the truth about a sexual assault she experienced when she was fifteen years old at the hands of Judge Brett Kavanaugh.”

Ford alleged that she was sexually assaulted by Kavanaugh while they were at a high school party in the 1980s. Kavanaugh has strongly denied the allegations.

The people at Body Language Ghost who analyzed then-SCOTUS nominee Brett Kavanaugh’s Fox News interview did the same for Ford and her testimony before the Senate Judiciary Committee.

While BLG believes Kavanaugh is innocent, they can’t say the same about Ford.

BLG notes: We’re [Dr. Ford] going to sway back and forth. We’re going to have a smaller voice than what is normal and make ourselves small and we’re do a little pretty, it’s cuteness. That’s what it is, it’s cuteness. Doing a pretty pose.

More: We’re going to use emotion to make you sympathize with me. I’m not coming off as a big scary bear or a medusa. I’m a soft little church mouse telling you about the evil kitty outside.