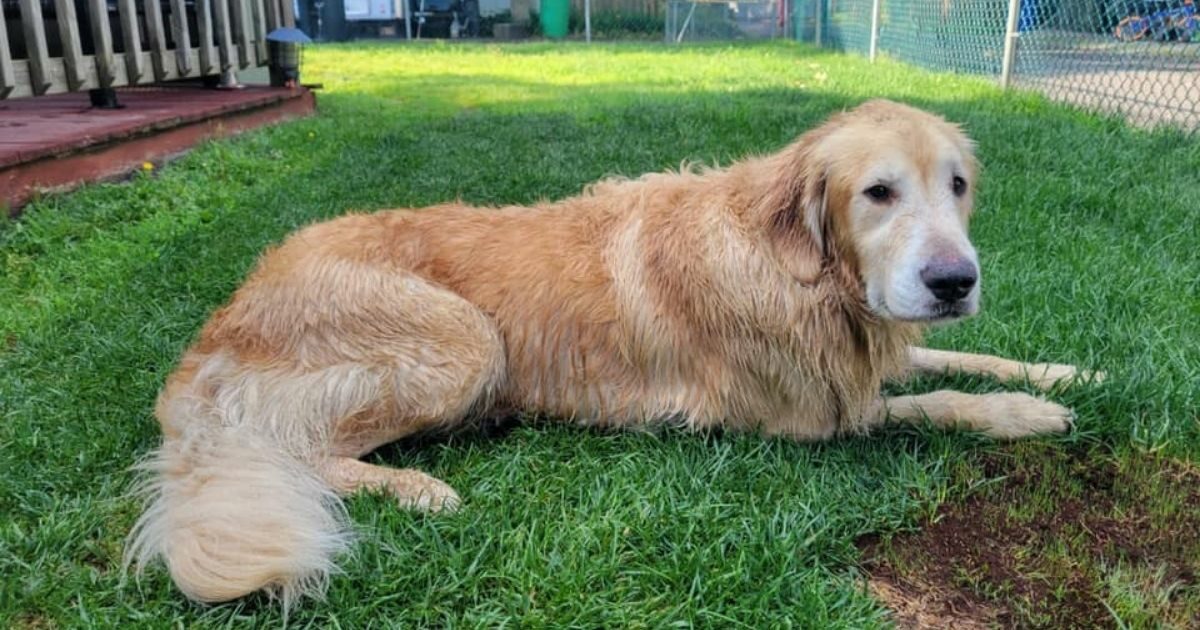 The last two weeks have been turbulent for a family in Brick, New Jersey, after their beloved 3-year-old golden retriever ran off and disappeared.

Jim Zangara had been on his boat with Chunk, the dog, and paused to talk to another boater. Looking for Chunk, he realized the dog had gotten off the boat.

“And all of a sudden I looked to see where he was, and he was in the woods a little bit,” Jim told the Asbury Park Press. “And I said, ‘Come here, Chunk,’ and he had his toy in his mouth, turned around and boom. And for no reason.”

“He’s very timid. He always has been. So maybe something scared him and that’s why he took off. It was very odd for him to do what he did.”

Posts were shared across many relevant lost and found groups online. People kept their eyes open for the large dog, and his family waited and wondered if they’d ever see him again.

“This past week has been tough,” she told NJ Advance Media. “No one had seen him since the eighth day he was missing. I was worried maybe he had gotten hit by a car or was off in the woods where we couldn’t find him or someone had grabbed him.”

But then, on Tuesday morning, he was spotted, and it took multiple people on land and sea to get the pup back.

First, two joggers saw a golden retriever in Trader’s Cove, and called to him. He immediately “jumped into the bay to avoid capture,” according to Marie. The joggers then called the Zangaras, having seen the “lost” posters in the area, and then they ran to ask a nearby boater, Jim Mathis, for assistance.

Mathis, on a fishing boat, approached Chunk as he swam across the bay, but Chunk wasn’t having it and bit him. Mathis got a hold of the dog’s collar, but it broke free, so Mathis did his best to escort the dog with his boat so no other boats would hit him. Since he still had the dog’s collar, he called the number on the ID tags and spoke with the Zangaras.

The Zangaras called the police, and soon state troopers were on their way to secure the dog. At last, Chunk was located, contained and picked up by his owners after more than two weeks on the lam.

“Troopers were preparing for their shift when they were dispatched to the report of a dog swimming in Barnegat Bay. Troopers Koehler and Ferdinandi responded in a vessel and located Chunk, who was swimming in the area of the Mantoloking Bridge, and were able to bring him safely to shore.”

“We got a dispatch call for a dog in the water,” Trooper Koehler recalled. “Once we got a little bit more information on the description, we kind of were putting two and two together that it was probably Chunk because he’s been all over social media over the last couple of weeks.”

Other than gaining some ticks and losing about 20 pounds, Chunk is doing well — aside from not really fitting his name anymore.

“It’s just like a dream come — It’s like a Hollywood movie, you know, this ending,” Marie said. “Because he was lost in the marsh for so long and then he winds up in the bay. He actually swam across the entire Barnegat Bay. And luckily he’s a strong dog and he’s young, so it worked out very nicely.”