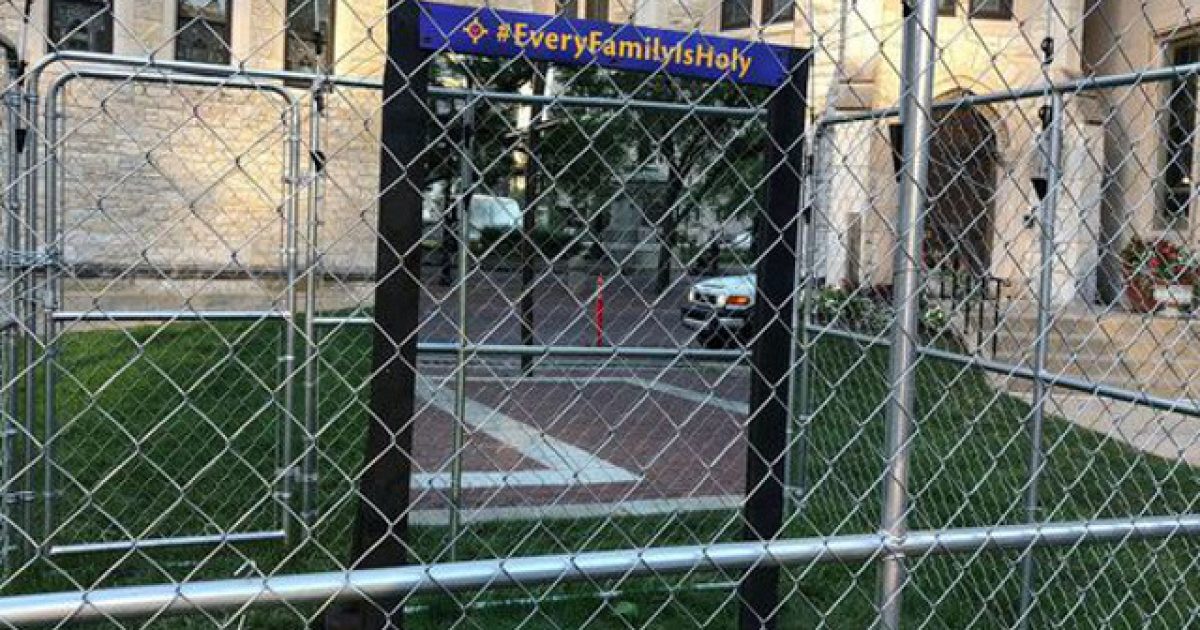 A church from Indianapolis that decided to take a stand against President Trump’s immigration policies caught a lot of flack initially for protesting in a way that many found to be blasphemous.

The church, led by the Rev. Stephen Carlsen, put Christ in a cage to draw attention to the separation and supposed persecution of immigrant families under Trump’s “zero tolerance” policy, which has been the talk of the town thanks to children being taken from their parents at the border.

Well, they’ve now decided that probably wasn’t the right way to go about things. They would be correct in that assessment. However, their response was to swap out Jesus for a mirror with the hashtag #EveryFamilyIsHoly.

So apparently you can just ignore the laws of the land and do whatever your heart desires and still be considered holy. That must be nice.

A tall mirror with the phrase #EveryFamilyIsHoly now sits inside a chain-link fence topped with barbed wire on the grounds of Christ Church Cathedral.

For most of the month, that space along Monument Circle was occupied by nativity statues of the baby Jesus, Mary and Joseph.

The Rev. Stephen Carlsen, dean and rector of the church, explained Thursday that the change was made so that visitors can envision themselves enduring the pain felt by detained and separated families.

“The original image was about how God loves us and then how we should love others based on that. This is about how we should love our neighbors as ourselves. That’s the core foundation of all ethics and morality,” said Carlsen. “Can you imagine what it’s like to come to this country seeking safety for your family, and if you did, how would you want to be treated? What would it be like for you to be detained and in a cage?”

The Rev. Canon Lee Curtis, who came up with the original idea that made its debut July 3, said the statues depict a family of refugees seeking asylum in Egypt after Jesus’ birth.

For him, the overwhelming response was encouraging, but there is still much work to be done.

“I was really happy to see the response, and I think that is proof to us the power of these icons and these images, and that’s part of the reason for the change. To be able to allow folks to situate themselves clearly with the plight of those who are detained and separated,” said Curtis. “Growing from the power of that original icon and that original statement, we are now making a very personal invitation to self-reflect … to really seeing yourself in those who are detained and separated.”

Secured borders are a part of biblical law. You can’t have a country without borders. That’s not how reality works. God knows this and that’s why he gave us the example of Israel and discussed this issue within the Bible.

It’s not wrong to send folks back to their home country who violate the laws of your nation. Now, does that mean injustices aren’t committed in the enforcement of these laws? No. Of course bad things sometimes happen during the enforcement of immigration policy.

Children should not be separated from their parents. That’s a flaw in our system that needs to be fixed. However, it’s also wrong, morally speaking, to disobey the law knowing there could be severe consequences for doing so, as in the case of those crossing over illegally.

There’s a lot of work that needs to be done on both sides of this, and that’s okay. However, advocating against immigration policies in favor of open borders is pure insanity.

San Francisco Weighing Yet Another Ban, This One is the Most Absurd Yet