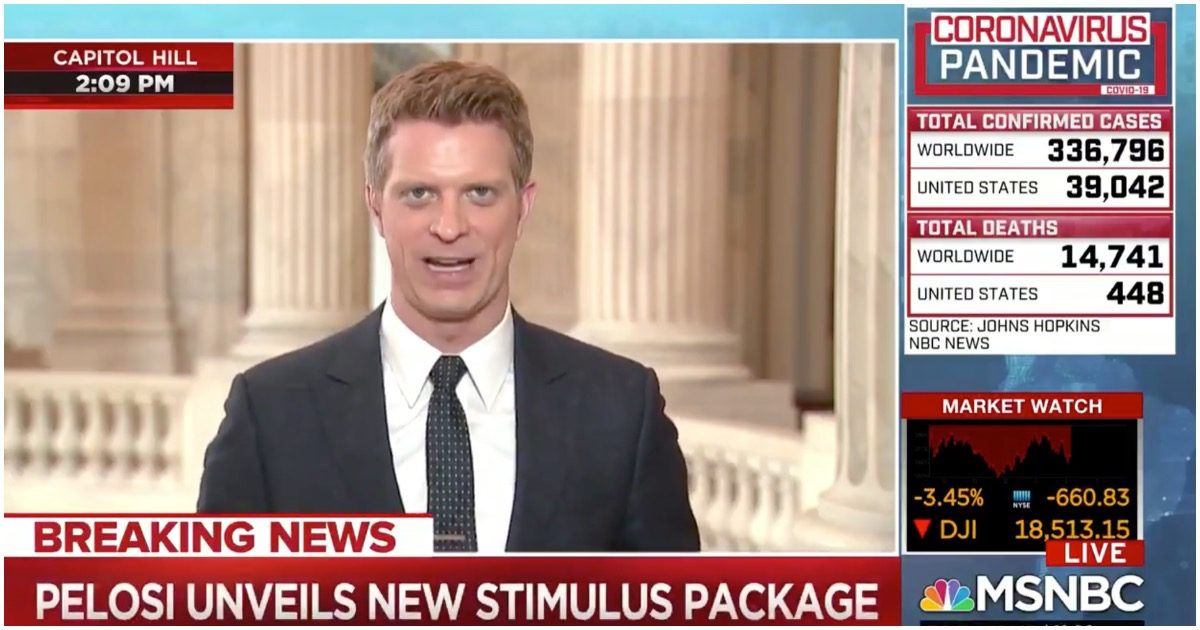 For the second time in two days, Senate Democrats have blocked a massive stimulus package that would greatly benefit the American people during the coronavirus pandemic.

Even far-left networks like MSNBC and CNN are blaming Congressional liberals for the hold up. Therefore, you just know something’s up.

Senator Chuck Schumer (D-NY) and the rest ’em ought to be feeling pretty silly right now.

When MSNBC doesn't even spin the political games Democrats are playing with coronavirus relief legislation.

"Do [Democrats] press too far and risk being blamed by the public for slowing down a bill that is widely agreed to be urgently needed out in the rest of the country." pic.twitter.com/rqIxqOWogj

House Speaker Nancy Pelosi introduced her own emergency coronavirus stimulus bill on Monday, leading furious Republicans to argue that much of the proposal contained a progressive wishlist seemingly unrelated to the crisis — including one provision that amounts to a resurrection of the notorious “Obamaphone” program, GOP officials said.

The bill proposed by Pelosi, D-Calif., additionally seeks to eliminate debt held by the U.S. Postal Service, require same-day voter registration, pay off $10,000 in student debt per person, mandate that airlines reduce their overall carbon emissions by 50 percent by 2050, and force federal agencies to explain to Congress how they are increasing their usage of “minority banks.”

If I had to pick somewhere to be self quarantined this would be it https://t.co/VDbiB5TjAz

Attorney General Bill Barr announces crackdown on price gouging and hoarding of critical medical supplies, going after the monsters who would do this at a time of crisis. pic.twitter.com/wHUxw6aBrh

Harvey Weinstein still faces rape and sexual assault charges in Los Angeles. Despite testing positive for #coronavirus in a New York prison, the L.A. District Attorney's Office has initiated its request to extradite him https://t.co/RxAyNTYsTE pic.twitter.com/2lxy4WOnCw

"He asks a lot of questions. That's his nature. He's constantly asking questions. And I never, in the multiple times I've done that, where I said, 'For scientific reasons we really should do this,' that he hasn't said, 'Let's do it.'" pic.twitter.com/cLNjRHOXwh

He did not, and the lie has been debunked by 5 independent fact checkers.

Will she apologize for lying to her viewers? https://t.co/gNtP2GqdbS pic.twitter.com/Li9y2dRi0V

Today's press briefing showing what uneducated louts most reporters are.

It's OBJECTIVELY TRUE that deaths rise during economic recessions.

It is also true that people commit suicide during lockdowns.

If you thought the ice-cream licker was bad — wait until you get a load of this guy (via @toofab)https://t.co/0iYpMFcwk9

The 'journalists' at this coronavirus press conference are arguing with President Trump about a decision he has NOT yet made. It's insanity. Do they think the country is never going back to work?

I'm amazed Trump is so patient w the ludicrous questions from these raging maniacs.

Dr. Birx: "I was not here over the weekend. Saturday, I had a little low-grade fever…"

BREAKING: US Slashes Aid To Afghanistan After Pompeo Trip To Kabul – https://t.co/8Vc2aBOsxa pic.twitter.com/PfSfm1muHp

So you did the left including Biden call Trump a racist for stopping incoming flights from China? https://t.co/mU1Lljrm5m

Hollywood Actor: It’s ‘Obvious’ Coronavirus Is Earth’s Response to Being ‘Damaged’ By Humans

Citizens Could See 6 Months In Jail Or $1,000 Fine for Breaking New Jersey ‘Stay At Home’ Order