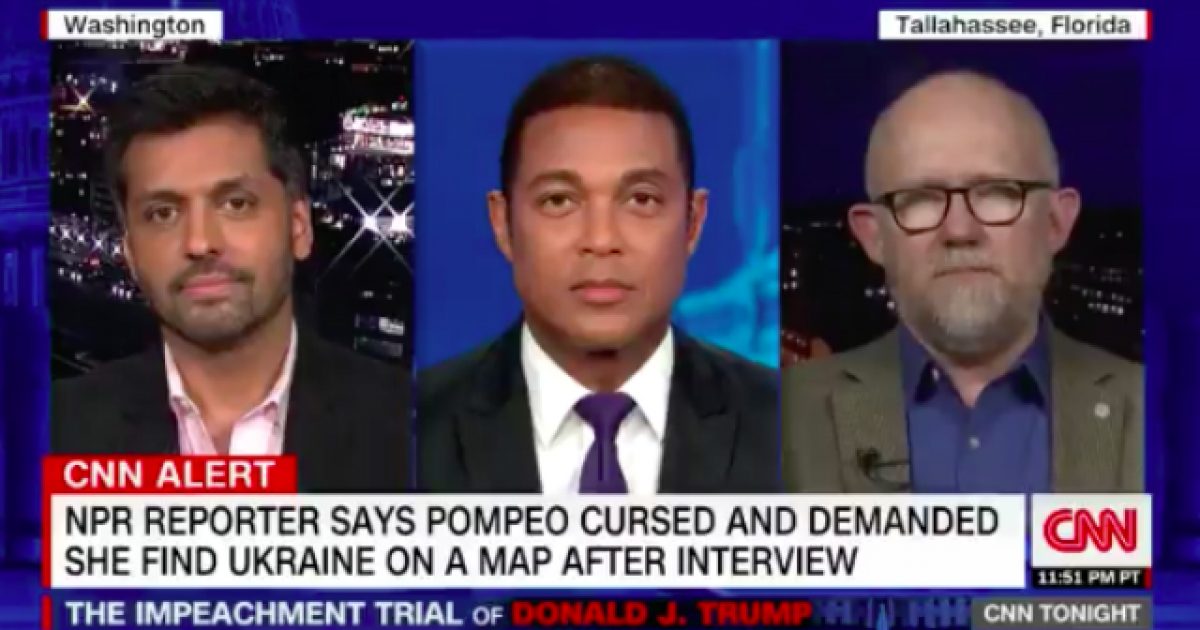 Popular left-wing news outlet CNN has a well earned reputation for being a little less than trustworthy when it comes to the stories they pursue and cover for their viewers, but what’s worse is how they treat folks who tend to have a different worldview than the one they ascribe to.

A recent clip, which has gone viral, of a panel on CNN disparaging Trump supporters is proves this claim to be true, but thankfully, we have a president who isn’t afraid to punch back and to defend his backers when someone attacks them.

Here’s more on this from the Daily Wire:

In the discussion, which occurred over the weekend, the host, Don Lemon, and two Trump critics, op-ed writer Wajahat Ali and Republican Rick Wilson, suggest that Trump supporters are illiterate “rubes” who can’t read a map or do basic math.

Speaking of Sec. of State Mike Pompeo, Wilson said that he “knows deep in his heart that Donald Trump couldn’t find Ukraine on a map if you had the letter U and a picture of an actual physical crane next to it” — a line that Lemon found side-splittingly hilarious.

Wilson then widened his mockery to include Trump’s “base” of supporters. “He knows that this is, you know, an administration defined by ignorance of the world, and so that’s partly him playing to their base and playing to their audience, you know, credulous boomer rube demo that back Donald Trump, that wants to think that Donald Trump’s a smart one, and y’all — y’all elitists are dumb,” said Wilson, adopting a southern accent.

“You elitists with your geography and your maps and your spelling…” mocked Ali.

“Your math, your reading,” said Wilson.

“Yes, your reading, you know,” Ali added. “Your geography knowing other countries. Sipping your latte.”

“All those lines on the map,” said Wilson, Lemon literally crying laughing at this point.

“Only them elitists know where Ukraine is,” Ali said in his worst redneck imitation, before repenting, “Sorry. I apologize.”

“Oh my god,” said Lemon, who laughed throughout the exchange and closed it with, “Rick, that was a good one. I needed that.”

The video clip has earned Lemon and his buddies a lot of backlash for the arrogance and mockery, including a vicious takedown tweet from former CNN senior digital producer Steve Krakauer:

The arrogance, the dismissiveness, the smug cackling, the accents.

If Donald Trump wins re-election this year, I’ll remember this brief CNN segment late one Saturday night in January as the perfect encapsulation for why it happened. pic.twitter.com/8kQ6zN9AZV

Trump’s response, however, might just be the most perfect of all:

Folks on both sides of the aisle have gotten way out of hand in their political discourse in the last few years, but the left has by far been much, much worse at escalating tensions between individuals in a very divided America.

This kind of behavior on a major news program is deplorable as well as unprofessional. They deserve the tongue lashing they receive from folks on both sides of the political spectrum.

Ivanka Trump Responds To CNN Panel Mocking Trump Supporters, Says What They Did Is ‘Disgusting’