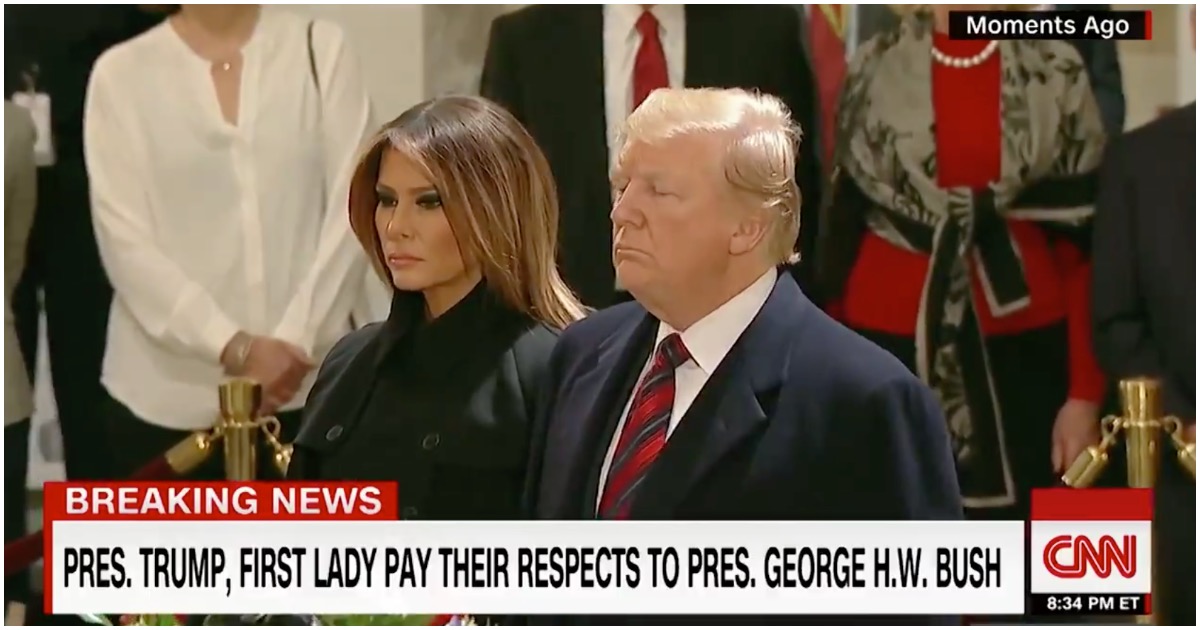 It’s always about President Trump to the left, no matter the occasion.

Whether a former president’s body lays in the Capitol Rotunda means nothing.

CNN repeatedly attacked President Donald Trump on Monday for putting politics aside and paying respects to former President George H.W. Bush in a segment that exemplified the network’s willingness to criticize the president for ratings and not for his actions.

Looking forward to being with the Bush Family to pay my respects to President George H.W. Bush.

CNN’s Jamie Gangel: “He’s not one to mend fences too readily. I think he’s doing this because he feels he has to do it and I’m also assuming General Kelly has had a big hand in it.”

“I do know from the Bush family that they are very appreciative and think the White House has just bent over backwards, gone to great lengths, been extraordinarily helpful. That said, I just can’t help but wonder if there was a thought bubble over Donald Trump’s head just know, what he was thinking as he stood there.”

CNN’s Jeffrey Engel: “I have to imagine he was thinking, ‘how much longer do I have to stand here?’

Gangel: “It’s, it’s, he had to be there, he did it, um, I think it’s interesting he did it because maybe he could have waited till the National Cathedral and then he saluted. It was somewhat theatrical, uh, in nature, but it’s, I, I can’t imagine that this is very comfortable for him, these moments and I think it is going to be fascinating to watch the cathedral on Wednesday and how he interacts with these other presidents and how he sits there during these eulogies.”

Engel: “I think we need to be a little bit thoughtful and careful about how we interpret what President Trump is doing here. David Gergen just mentioned we need to give him credit for not tweeting out nasty things about President Bush. I’m concerned that we shouldn’t give credit to someone for not kicking dirt on the grave of a person who just passed away.”

Tweets Trump sent about Bush after his death:

President George H.W. Bush led a long, successful and beautiful life. Whenever I was with him I saw his absolute joy for life and true pride in his family. His accomplishments were great from beginning to end. He was a truly wonderful man and will be missed by all!

….However, out of respect for the Bush Family and former President George H.W. Bush we will wait until after the funeral to have a press conference.

How the @AP treated Castro vs. How they treat Bush pic.twitter.com/6bJKLK1X6H

The stock markets will be closed on Wednesday in Bush’s honor, and President Trump has ordered flags at half-staff for 30 days in remembrance.

Trump: “Air Force One will be taking myself and a large group of our people back to Washington. It will then be reset and it will be sent to Houston to pick up the casket of President Bush and then be brought back to Washington.”

Trump: “We’ll be sending Air Force One, which is a special tribute that he deserves very much and it’s my honor, and again, he’ll be greatly missed. Terrific person, terrific man.”

Unsustainable: Over 7 in 10 Immigrant Households Are On Welfare In One State Alone