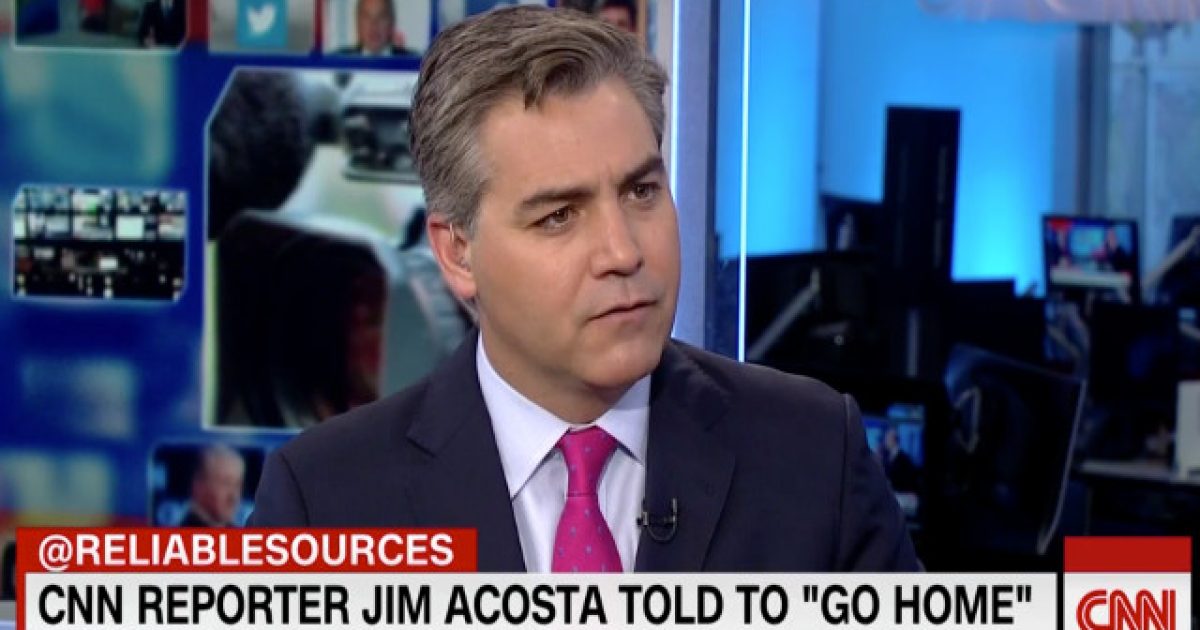 CNN White House correspondent Jim Acosta, a man who has earned a reputation for annoying not only conservatives and Trump supporters with his abrasive style of journalism and rude behavior during press conferences, but the left also, has had about enough of the president calling the media “fake news.”

So much so, he’s demanding he and other conservatives stop using the phrase in reference to the country’s leading news networks. The reason why? He’s apparently scared that someone is going to get hurt.

The past week may have signaled a turning point in journalists fighting back against Trump’s attacks, with the White House Correspondents Association issuing a statement condemning him for praising a Montana congressman who body-slammed a reporter last year during a successful congressional campaign.

Acosta, Maggie Haberman and WHCA President Olivier Knox talked about the personal toll the words have taken during a panel Monday at CNN’s “Citizen” conference. Knox said the day after Trump referred to some news organizations as enemies of the people, his child came to him in tears and asked if he was going to prison.

Trump has been advised that his words against the media have an impact, but “he doesn’t seem to care,” said Haberman, who covered Trump as a New York real estate baron and now in the White House. A.G. Sulzberger, publisher of The New York Times, also said that he was glad Trump broke an agreement to keep a conversation the two men had off the record because it revealed publicly that he had made the same point to the president.

“All he hears is the cheering of the crowd when he gets up and says it,” Haberman said.

Acosta wonders how serious Trump actually is in his criticism, and the extent to which “fake news” is just another line delivered by a man who made “you’re fired” a signature when he hosted “The Apprentice.”

Look, there’s a legitimate reason why so many people have a deeply negative view of the mainstream media and why they believe so much of what is being reported on is “fake news.”

It’s because it is.

The mainstream media has been compromised for quite sometime, trading in their mission to be an objective force  dedicated to providing folks with all of the facts they need to make informed decisions and hold elected officials accountable.

Instead, they are only concerned these days with pushing an agenda. And when it comes to ousting Trump as president, they have been quite aggressive, often misreporting facts in an eager pursuit of finding the big scoop that will be the president’s undoing.

While folks might be throwing around the term “fake news” a bit willy-nilly, until the media becomes somewhat honorable again, folks are going to be extremely skeptical, and given the track record here, they should be.

Six-Year-Old Invites 30 Kids to Birthday Party, But None of Them Come. When This Sports Team Finds Out, Everything Changes.