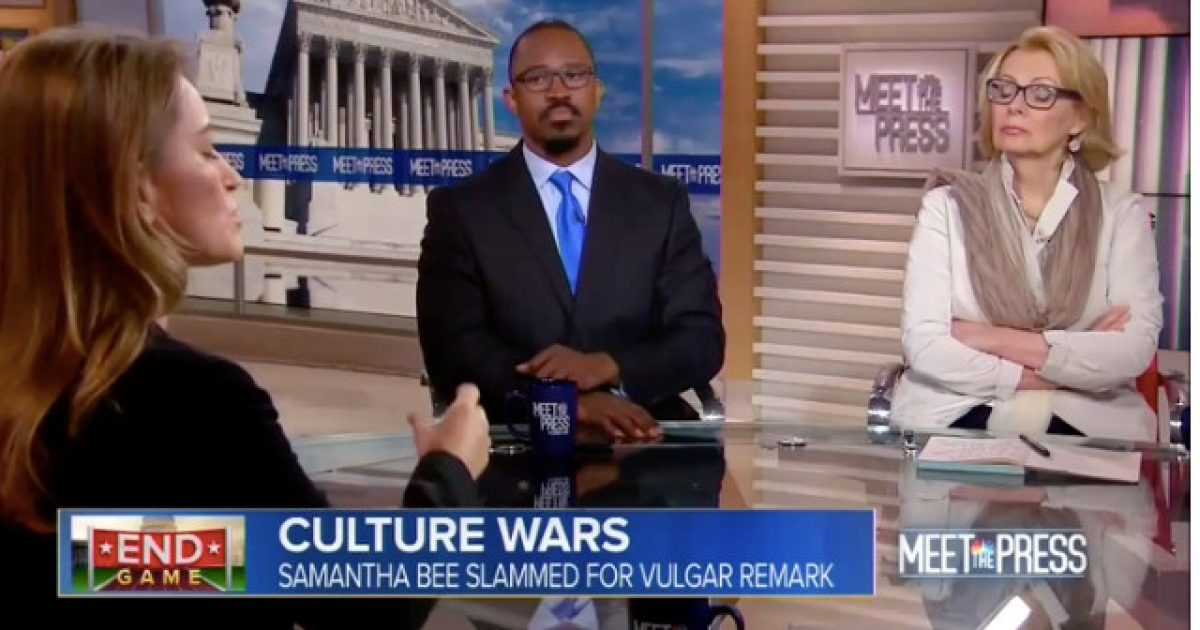 In case you’ve forgotten, in the mix of muck and mire that comes out daily concerning the state of politics in modern America, Bee created a little segment on her TBS show blasting Ivanka for posting a photo with her son, calling her the “c-word” and slamming Trump’s immigration policy for “ripping families apart.”

“This spark of the culture wars with Roseanne and Sam Bee. Is this about our inability to deal with race in this country?” said host Chuck Todd. “That’s what the Left sort of sees it as, Joshua. Or, is this about a double standard in that we sort of hold… we’ll hold folks on the right more accountable with their bad tastes than we will on the left?”

“I am very glad to see a certain amount of backlash against them, almost as if the American people are saying, ‘Stop it already, this is terrible. You’re making it worse,'” said Noonan.

“I do think what’s unfortunate here is that the Samantha Bee controversy, it’s now overshadowing what is the story that she was trying to bring attention too, which is a story that families are being ripped apart at the border,” she opined. “That this administration is claiming there is a new law when it’s just a policy and they’re taking families apart even when families are coming in, according to reporters, asking for asylum. That is a real issue. That is not being covered because we’re all talking about Samantha Bee using a word that she should not have used.”

Noonan wasn’t having any of this nonsense. Not a drop.

“It wasn’t just a word,” she retorted. “It was an obscene personal attack … and that did obscure her point, but that also showed maybe she wasn’t serious about it.”

Lowry decided to join in on the tag team action and drop a verbal elbow on the whole matter:

“I don’t think Samantha Bee and Roseanne are really comparable,” said Lowry. “I think some people are saying Trump enabled Roseanne Barr. She has been a kook for 20 years. And her Twitter timeline has been grotesque for 10 years or however long she’s been on Twitter. But Samantha Bee was hired to be a partisan vulgarian. And underlining something Peggy said, my friend Yuval Levin of National Affairs makes a point, the problem with institutions: no one considers themselves an insider anymore has a responsibility for being better and being a steward. Everyone considers themselves to be an outsider.”

Listen, the problem isn’t that ABC dropped the hammer on Roseanne. That whole fiasco is understandable, given the horrific nature of the comment she let fly on social media.

What celebrities of all stripes fail to understand is that when you have a show on a certain network, you represent that network. Thus, it is imperative that you think through the things you say in public, because they no longer reflect on you alone, but on your network and co-stars also.

While freedom of speech exists, that doesn’t mean none of our speech has consequences. Obviously it does.

That being said, the problem here is that Bee is not being held to the same standard by her fellow liberals that they held Roseanne too. If you are going to espouse a particular principle and cite such as justification for taking specific action, you need to be consistent in your application of that principle.

Otherwise you’re a hypocrite, which is exactly what Bee and TBS — the network that airs her show — are being right now.