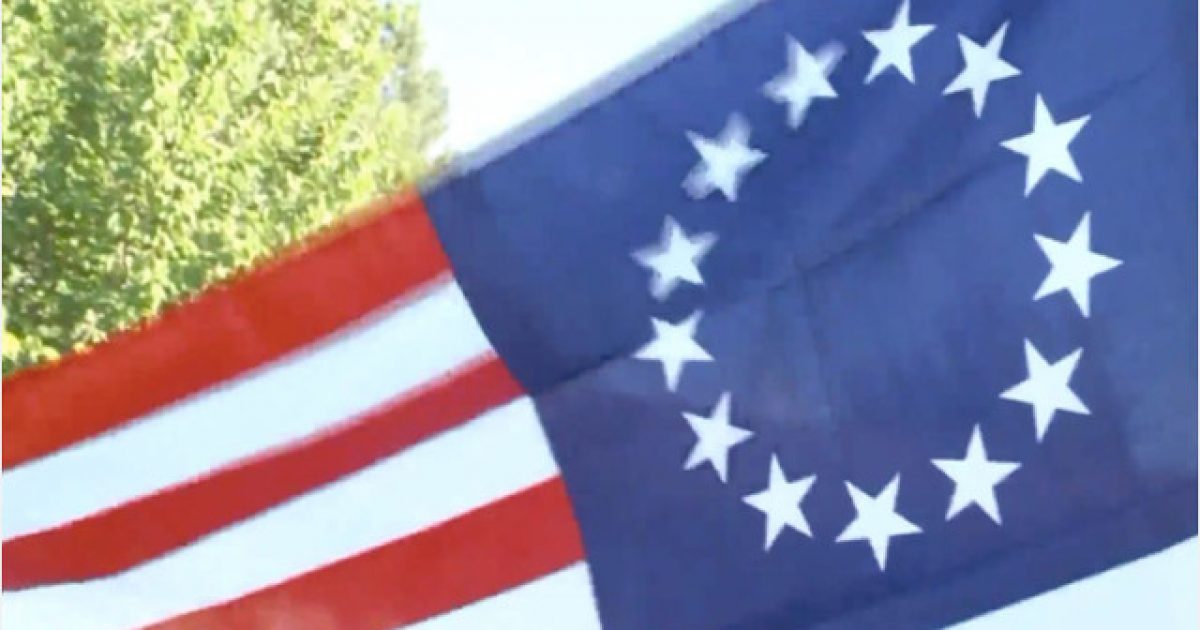 What is our nation coming to when just flying your own flag, a symbol of what we stand for as a country — liberty, prosperity, the pursuit of happiness — is labeled a symbol of hate?

This has become a common thought among the left in America, with more and more folks burning the flag, spitting on it, and trashing it and the principles we stand for.

What’s worse is that doing this is equal to spitting in the faces of all those who shed blood for this flag and for our great nation in generations past.

A recent example of this comes to us from Utah, where a couple, Randolf and Diana Scott, claim a soccer stadium threatened to eject them from the stadium if they didn’t put away their Betsy Ross American flag.

Stadium officials, according to the couple, were less than pleased with the flag and demanded they put it away or be made to leave the stadium. The staff insisted that the flag was a “symbol for hate groups,” and had been the subject of myriad complaints from fellow fans.

The Scotts, who are season ticket holders, regularly dress up with patriotic-themed garb and hairstyles, and typically wave American flags at the events.

Randolf told KSTU-TV that his wife had purchased the Betsy Ross flag because his old flag was falling apart.

“Diana bought it for me, actually, because my other flag was kind of old and falling apart,” he explained.

Diana said, “They kept telling us if he wasn’t going to take the flag down, we were going to be rejected from the game.”

The Scotts said they initially refused to take it down, but eventually decided to comply with the rule so as to not be ejected from the game.

Randolf stated that a staff member asked him what the purpose of the flag was, to which he replied that he and his wife love America.

“When people see me or Diana with this flag, I hope they can understand that it’s about the freedoms we have here in America. The legacy that America has,” Randolf said.

Here’s what the Real Salt Lake soccer club had to say about the incident:

“At Real Salt Lake, it is our mission to unify our community through soccer and we promote inclusion, diversity and acceptance. It is important that everyone in the community not only feel welcome at our stadiums, but appreciated, respected and valued. Rio Tinto Stadium is reflective of that on match day and we encourage a unifying and welcoming environment to all fans at all of our RSL and Utah Royals FC matches.”

“To be permitted to bring a flag into any of our stadiums is a privilege,” the statement continued. “Recently, and very controversially as well as surprising to us, the Colonial flag has been adopted as a symbol for hate groups. Any controversial flags or other similar banners or signs with symbols of hatred, divisiveness and/or intolerance whether intentional or otherwise will not be permitted in our stadiums. Period.”

Can you believe it? The American flag, a symbol of liberty and freedom recognized all over the world, has become a topic of controversy. It’s truly tragic.

Granted, this is an old flag, but it stands for the same principles our current one stands for, so it’s all the same. In the end, this flag is not racist in the slightest. Nor does it represent oppression. Quite the opposite, actually.

I certainly hope a time comes in the near future when it is en vogue to be patriotic again. Even if it doesn’t, we all need to keep being faithful to our beliefs, especially the one that says America is the greatest country on earth.

Authorities Are Investigating Politician For Hate Crime. What Did She Do? Posted This Bible Verse On Social Media