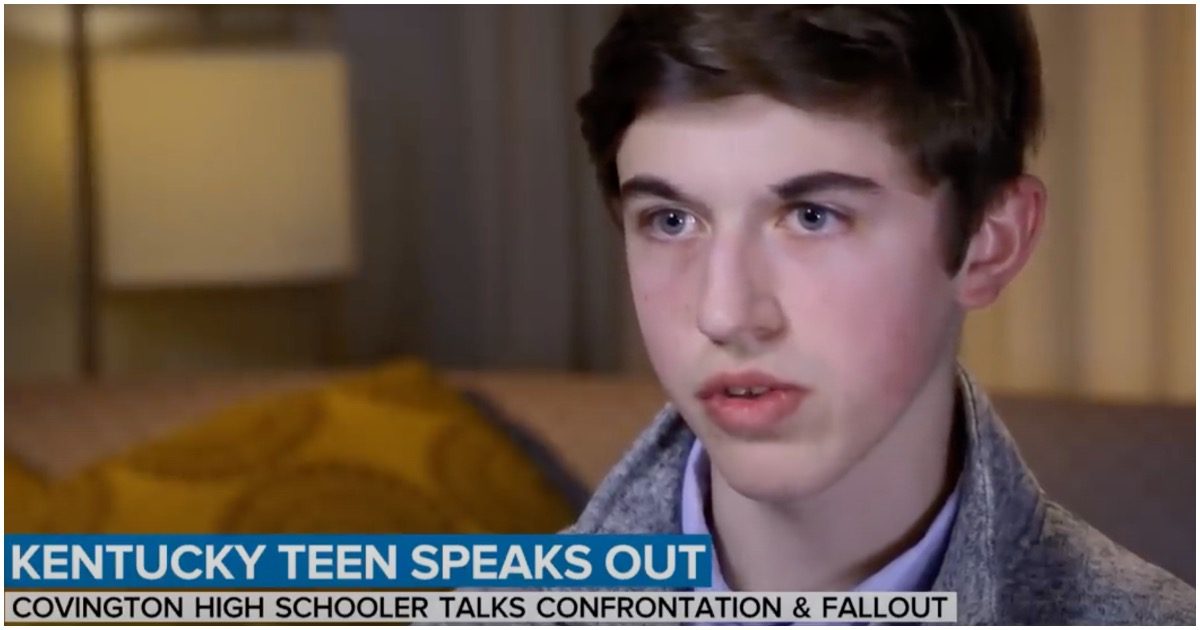 The radically far-left mainstream media may have moved on from its coverage of Covington Catholic High School teenager Nick Sandmann, but that doesn’t mean the nightmare has ended for him.

You remember Nick and the situation he found himself in with American Indian activist, Nathan Phillips, right?

The students were doing school cheers and not bothering anyone while on a trip to Washington DC. Phillips invaded their space in an attempt to antagonize.

Leftist activists brutally mocked the “white privilege” kids, while the mainstream media and unhinged celebrities erred bigly – as the facts have shown.

Now, Sandmann explains how he faces death threats wherever he goes. And it is 100% the media’s fault.

Covington Catholic High School student Nick Sandmann said that he has lived under a “constant” and “terrible” threat — ever since his image was splashed across television screens and posted on websites and social media platforms worldwide.

Sandmann returned to the Lincoln Memorial with Logan for the first time since his life was turned upside down by his chance meeting with Phillips.

“As we stood there, people began to stare at Nick and it became uncomfortable,” narrated [Lara] Logan. “He was mindful of the death threats and bomb threats against him, his home and [his attorney Todd McMurtry]. So we decided to leave. The long looks followed us on the way.”

When asked if this is the sort of attention he receives “all the time,” Sandmann responded, “It happens everywhere I go. From in my community to different parts of the country. Everywhere I go, there is someone that will point me out.”

President Trump weighed-in, at the time…

It turns out that the Sandmann case wasn’t the first time Phillips has accused kids of racial harassment.

Back in 2015 he claimed that a group of college students, who were allegedly dressed as Indians for a party, used verbal slurs as he walked by.

Is Phillips a Vietnam vet, as he claimed?

Has anybody confirmed whether Nathan Phillips actually is a Vietnam veteran or if he is pulling a Blumenthal stolen valor scam? I couldn't find a Nathan Phillips from Michigan in a https://t.co/U1yiwR40qy search pic.twitter.com/27UdBuFVwB

Far-left know-nothing Alyssa Milano shared her ignorant thoughts on the situation, too…