Iran Has A Hissy Fit At World Cup
The Lid

Next up in the annals of leftist lunacy, now the learned autocrats at the University of Wisconsin-Madison says rocks are racist.

Indeed, the rock was deemed so “offensive” to the snowflakes at Wisconsin’s Moscow University that the school actually went to the expense of removing it — all 70 tons of it — and at a cost of $75,000, Fox News reported.

The rock was named “Chamberlain Rock,” in honor of local geologist Thomas Crowder Chamberlin whose work helped science further understand glacial deposits in the 1920s. Chamberlain was also once the president of the university.

The giant boulder was found right there deep in the university’s “Observatory Hill” in 1925. As it happens, the boulder became a local celebrity when workers spent three days digging it out of the hill to be left on display for all to see and enjoy at the time.

So, what is the problem?

Well, in 1925, the Wisconsin State Journal published a story about the rock in which it was described with the then common colloquial term for dark colored rocks. That word is “niggerhead.” 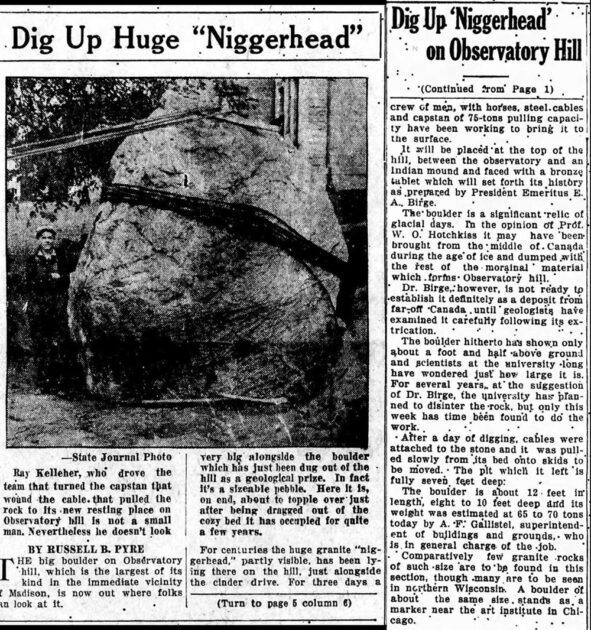 Once the activist nitwits in the student body were made acquainted with this nearly 100-year-old newspaper article, suddenly they all felt “unsafe,” and their little snowflake panties got bunched up.

Now, mind you, while “niggerhead” is certainly a racist term that fell out of favor decades ago. But the thing is, no one ever called “Chamberlain Rock” a “niggerhead” on campus. Or if they did, it was more than 70 years ago.

Further, it was never given that name officially by the university. It was just a gross term thrown around by a journalist nearly 100 years ago.

After all, how bad could it have been on these poor snowflakes if it took a 100-year-old newspaper article to trigger them.

There was no reason whatever to waste $75,000 on removing a giant boulder because a hundred years ago someone used the n-word to describe it.

But who expects logic and common sense from leftists?