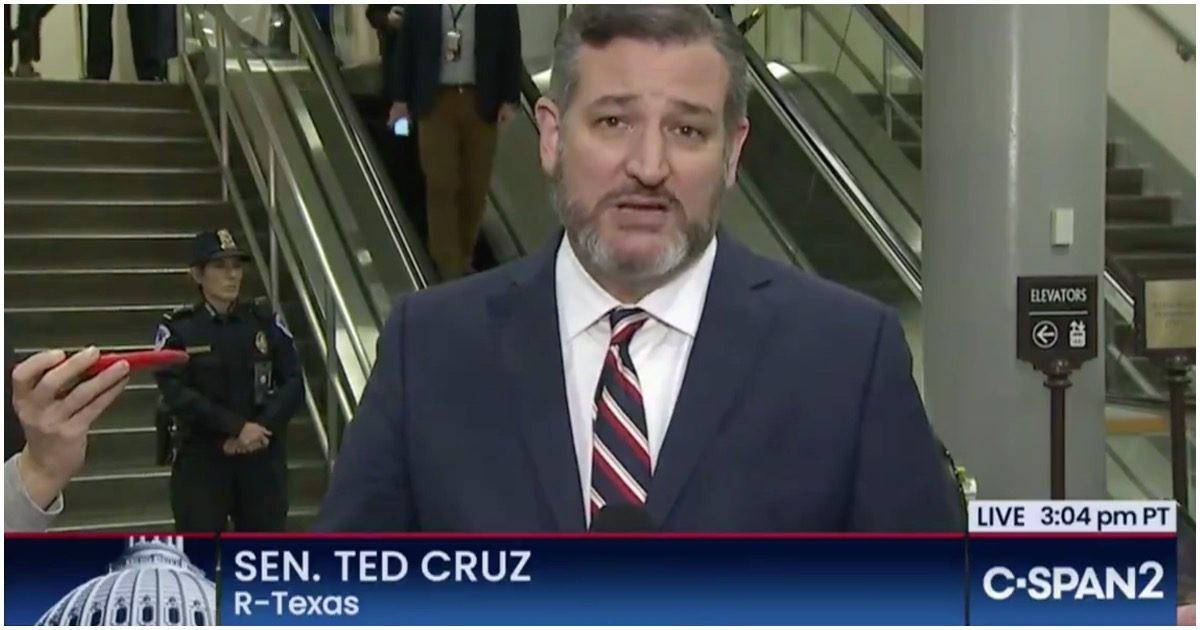 Texas Senator Ted Cruz (R) is a master debater. The man has forgotten more about the history of the United States and the Constitution than most Americans will ever know. Ultimately, Ted is certainly no dummy. He put his smarts on display on Monday morning. Liberals weren’t thrilled. From Twitchy:

As Twitchy reported, White House counsel was up to bat again Monday in the Senate impeachment trial, and Pam Bondi brought the heat when it came to the Bidens, Ukraine, and corruption. Vice President Joe Biden was at the “forefront of the US/Ukraine policy,” she noted, despite Hunter Biden’s obvious conflict of interest.

CNN’s Oliver Darcy seemed shocked that Fox News didn’t cut away while all of these “conspiracy theories” about the Bidens were being outed on the Senate floor, but Sen. Ted Cruz managed to find a camera and give his view of the proceedings.

At 2:50 a god damn journo says they want to lock up Ted Cruz's 9 year old kid

These Liberal Hacks have lost their minds!!

That's my takeaway too. He repeatedly tries to derail Cruz, then throws out a ridiculous "everybody's kid does it" question at the end. I want a name for this guy. He is not a journalist, he's a plant.

The media is flipping out that the truth was exposed today.

These – at least some – of these reporters reactions prove they are not interested in truth or even the constitution… they are only interested in their anti-Trump agenda. SAD!

Glorious trap. Senate Republicans open to the “one for one” additional witness testimony (even though extremely unusual at this late stage for ANY additional witnesses to testify). Chucky & co refuse point blank. Not a snowballs chance in hell they would let Hunter testify.

After the media badgering every Republican who spoke during the recess Schitt for brains came up to speak endlessly and you could have heard a pin drop, not one push back, just complete obedient lap dogs.

One of the best things to come from Trumps presidency, he gave the republicans their spines back. It's great to see Cruz take off the kid gloves and tell it like it is! The winning will continue long after Trumps 2nd term.. the man has changed the game, for the better. Love it…

Joe Biden is having aneurysm

FINALLY! As I’ve said from the beginning, Trump did not do anything wrong in asking for an investigation of possible corruption, especially corruption involving former U.S. officials. The Bidens don’t get immunity just b/c Joe is running for president.

It's been going on for decades but it's still jarring to see so-called journalists actively advocating the Democrats' case.