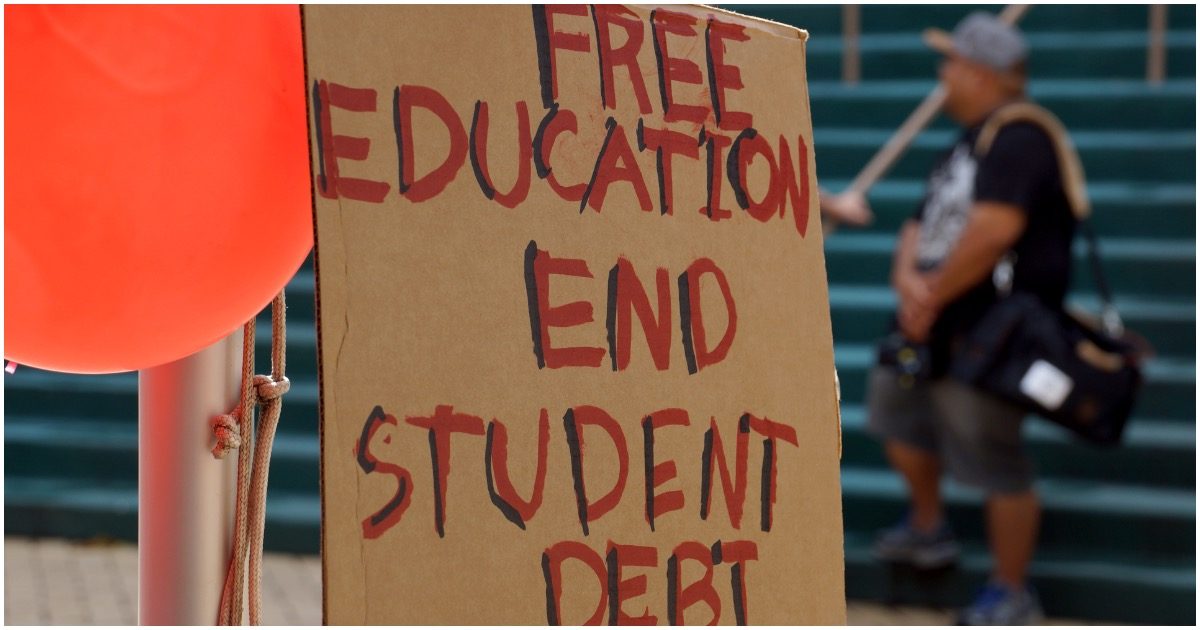 Yesterday, ‘President-elect’ Joe Biden said, “Public colleges and universities are going to be tuition-free for families earning less than $125,000.” Hmm… Beyond the proclamations, what does free tuition or exoneration of student debt actually mean?

I know a fellow who went to a four-year college and had a deal with his parents: He would pay for half of each semester and his parents would pay the other half, for eight semesters. He racked up $24,000 in debt, a huge sum, years ago. It would have been much higher, but he enrolled in his bargain-priced state university.

You’re on Your Own

He spent years saving every dime that he could. Penny-pinching and scrimping, and forgoing much of the nightlife fun with his friends, by age 28, he was debt free. He continued to save, and in 12 months had enough for a down payment on his first home.

Nice story? Well, that fellow was me. I worked hard to pay off that loan and felt good when I was done.

‘Led’ by Biden, the Democrats, falling for another “feels good” policy which will lead to disaster, are calling for free tuition and even the exoneration of student loan debt for multi-millions of Americans. Suppose I only had graduated last year. Now, I am to benefit enormously as a result of ‘progressive’ desire to exonerate all student loans? Or exonerate some fixed amount of my debt?

Whether I graduated decades ago, or last year, why not reimburse me, with interest, for about $58,000 today? Oh, it doesn’t work that way?

Consider anyone who graduates in 2018, and racks up $92,000 in student loans. For two years, they’ve had trouble paying it back, and have hardly reduced the balance. Someone else graduates in 2020. They rack up all kinds of debt and haven’t made a single payment.

Both loan recipients are to be equally exonerated? “Ridiculous” you say? One loan recipient had made some payments. So, should they be on equal footing? What about forgiving each of them for $10,000, or $20,000, or $50,000 of their debts? This is a bad idea as well. Let’s see why.

A Glad, or Sad Grad?

Suppose someone graduated in 2012, incurring huge debt, but either they and/or their parents paid it off before 2020. Should that family be reimbursed? After all, a recent graduate paid in full, instead of having a huge balance linger.

If such students and their parents are exonerated, what are we telling current students who incur huge debts? Rack it up? You’re never going to have to repay it! How equitable is it to avoid retroactively reimbursing recent graduates who’ve paid off their debt? How fair is it to reimburse recent graduates who have repaid little or nothing, while others sacrificed and worked their tails off?

A huge mess results when you espouse free tuition or student loan debt forgiveness on any level.

Where do you decide to draw a line? What about current students at public universities with accumulating large debts? Those who graduated or expect to graduate after a particular date, or who incurred debt after a certain date, will be forgiven, but before that date, sorry, you’re not part of the program. Should students who have received scholarship money be exempt, or partially exempt, or fully included? Should debt be exonerated for students who dropped out and never graduated?

No Line in the Sand Will Work

Suppose you move the forgiveness cut-off date further back in time. At some point, you’re still going to forsake legions of college graduates who incurred loan debt, and either paid it off, or are still paying. They are not going to receive the same benefits as you extend to more recent graduates, with more recent debt.

Aggregate student debt now exceeds $1.6 trillion. One simply cannot justify free tuition or student loan debt forgiveness, even for partial sums, and have it be fair across the board.

What’s more, we are a nation that is $27.4 trillion in debt and climbing, with $155.9 trillion dollars in unfunded liabilities. We also seek to compensate business owners and career professionals nationwide who have had severely limited income since March with the lockdowns and shutdowns.

In short: sorry Joe Biden and the usual gang of leftists. The U.S. is not in a position to offer free tuition or student loan debt forgiveness, nor should it ever make such as gesture.

ICYMI: Trump Promotes Protest In DC on January 6, Tells Supporters: ‘Be There, Will Be Wild!’

CNN’s Chris Cuomo: ‘Inhumane’ Trump Is the ‘Worst President We Have Ever Seen’