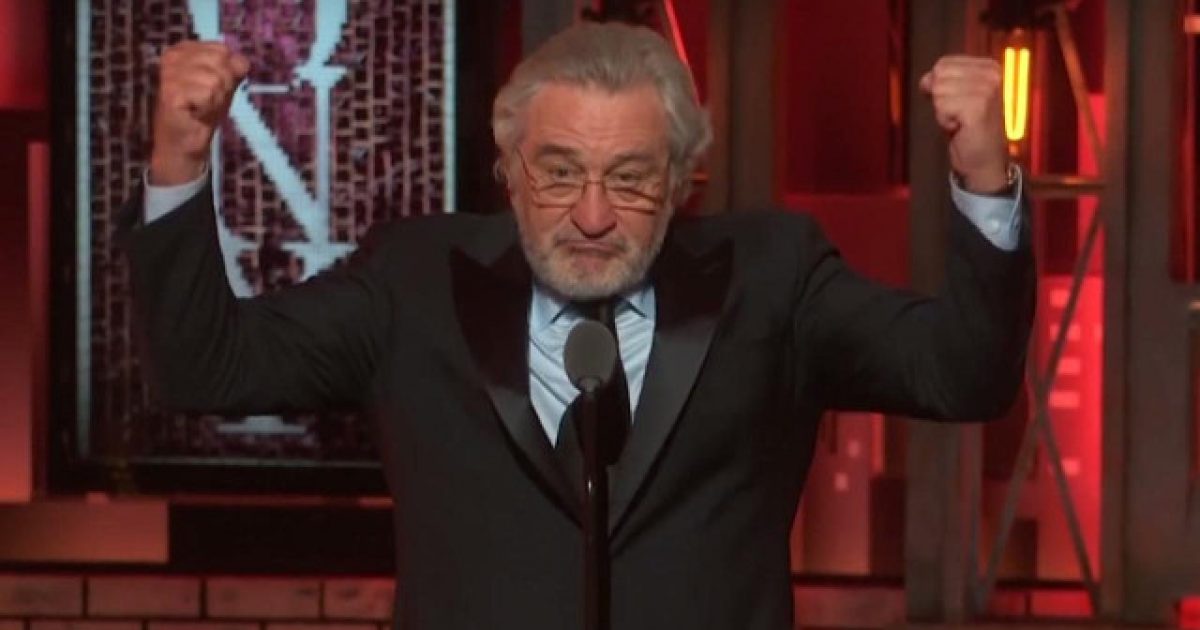 Actor Robert De Niro has made his feelings about President Trump well known over the last two years since the 2016 election, but for whatever reason, he just never seems to get tired of voicing them over and over and over again.

On many occasions he’s been in such a tizzy over Trump — who he once said he’d like to punch in the face — that he often times appears to be a bit mentally ill, obsessed, and off-the-hinges angry.

A good case in point would be the comment he made at the Tony Awards this past weekend, which stirred the sycophant crowd of left-wing nuts in attendance into giving a standing ovation.

De Niro, Mr. Famous High School Dropout and Noted Cerebral Intellect, displayed his erudite knowledge of politics, utter command of the most sophisticated verbiage from his personal lexicon and well-deserved reputation as a man of class and gentility by marching on stage to applause, then leaning into the microphone and bellowing, “I’m gonna say one thing: “F*** Trump.”

Hearkening back to his days of yore when he won the Oscar for “Raging Bull,” De Niro raised his fists in the age-old tradition of a winning fighter, as the crowd screamed its approval and rose to their feet to give the Einstein Of Our Time a standing ovation.

Inspired by his unanimous approbation, De Niro called out, “It’s no longer ‘Down with Trump,” it’s “F*** Trump!” That triggered another surge of cheering.

Another moment that De Niro seized to make anti-Trump remarks involved a speech at a high school, caring little about his audience or the appropriateness of his comments, stating Trump was “bulls***.”

Gee, De Niro is just a chip off the old block, isn’t he?

One has to wonder why De Niro is so angry. What policies has Trump proposed that he disagrees with and why? It seems the man is incapable of putting together a coherent argument against Trump and just has a strong distaste for the man.

He certainly has the right to express his views about Trump, as does the crowd who attends events where the man speaks. This is America after all.

However, that means the rest of us also have the right to call him a crazy, old, senile, Hollywood blowhard and move on with our lives.

CrossFit Exec Booted for Calling LGBTQ ‘Pride’ a Sin. Now He’s Speaking Out, and He Has a Message Christians Need to Hear