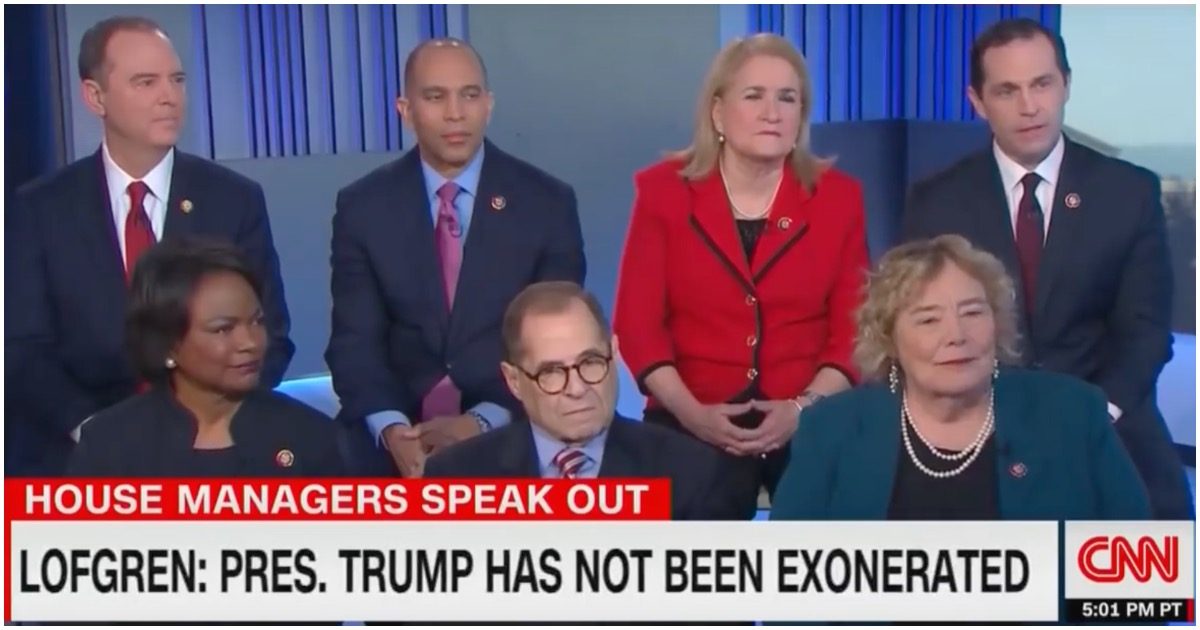 If you listened to Democrats or the mainstream media, you’d think President Trump wasn’t acquitted and is still on trial.

He was and he isn’t, in case you live under a rock. But Dems are going to keep doing their thing, no matter how much the American people tell them to cut it out.

The seven House managers claimed during a sit-down interview Friday with CNN’s Anderson Cooper that President Donald Trump has not been acquitted following the Senate impeachment trial because it was not “a fair trial.”

Trump was acquitted on both articles of impeachment Wednesday after over four months of debate. The House managers sat down in an exclusive interview with “Anderson Cooper 360” Friday to discuss the trial and what comes next, and all appeared to be in agreement that despite the Senate’s vote, the president was still not exonerated.

Schiff said, “The House did not take this extraordinarily step lightly. As we will discuss, impeachment exists for cases in which the conduct of the president rises beyond mere policies, disputes to be decided otherwise, and without urgency at the ballot box.”

He added, “Instead, we are here today to consider a much more grave matter and that is an attempt to use the powers of the presidency to cheat in an election,” Schiff continued. “For precisely this reason, the president’s misconduct cannot be decided at the ballot box, for we cannot be assured that the vote will be fairly won.”

Even when applying liberal logic, this one is a complete head scratcher. It’s as if Rep. Hakeem Jeffries (NY) didn’t think anybody actually heard him saying these words.

Democratic House impeachment manager Rep. Hakeem Jeffries (D-NY) said this week during President Donald Trump’s Senate impeachment trial that it was not a problem for Democrats to get foreign opposition research on then-candidate Trump in 2016 because they “purchased” it.

The New York Post noted that Jeffries made the remark in response to a question from Sen. Richard Burr (R-NC), “who noted Hillary Clinton’s campaign hired Christopher Steele – a former British spy – to work with contacts abroad and compile the salacious dossier.”

Asked whether, under the Dems' impeachment standard, the Clinton campaign's solicitation of the Steele dossier would be considered foreign interference, illegal, or impeachable, @RepJeffries says no — because the Steele dossier "was purchased." pic.twitter.com/SbEKFGNwM4