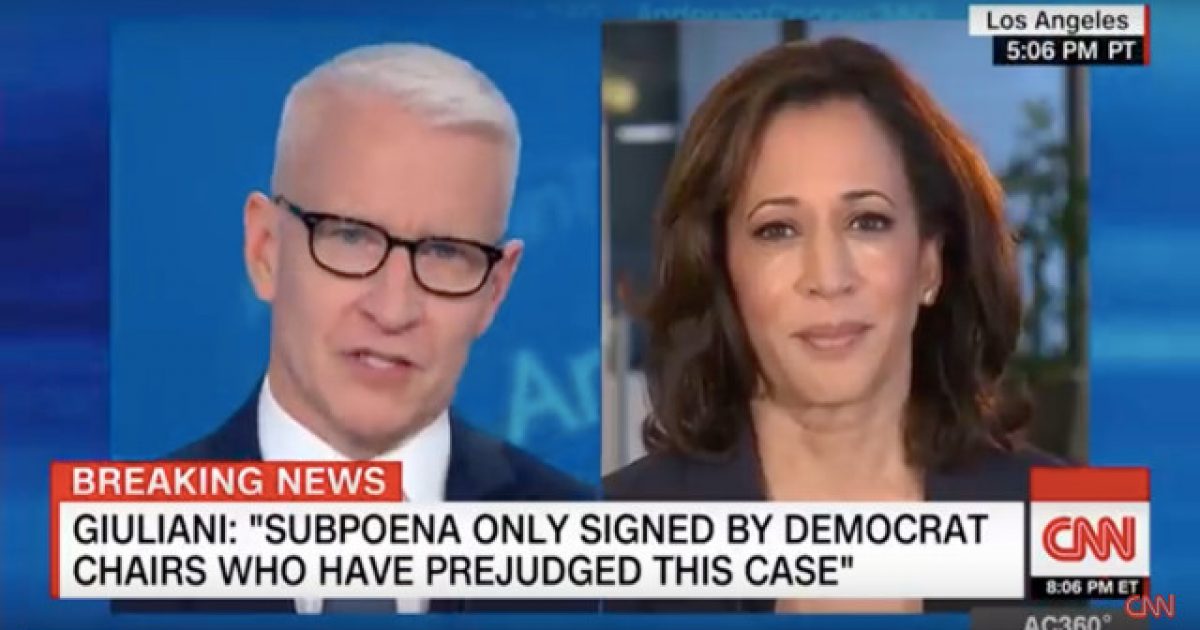 Democratic presidential candidate Sen. Kamala Harris is now calling for Twitter to suspend the account of President Donald Trump in light of the tweets he’s been making concerning the whistleblower in the Ukraine scandal that has the potential to lead to the president’s impeachment.

Harris expressed these sentiments to Anderson Cooper during an appearance on CNN.

“The president’s tweets and his behaviors about this are just further evidence of the fact that he uses his power in a way that is designed to beat people down instead of lift people up,” Harris told CNN’s Anderson Cooper.

“Frankly, when you look at what he’s been tweeting today directed at the whistleblower, directed at so many people … I, frankly, think that based on this and all we’ve seen him do before, including attacking members of Congress, that … his Twitter account should be suspended,” added Harris, a 2020 presidential candidate. “I think there is plenty of now evidence to suggest that he is irresponsible with his words in a way that could result in harm to other people. And so the privilege of using those words in that way should probably be taken from him.”

Cooper asked the California senator if she was concerned that suspending Trump’s Twitter account would be viewed as Silicon Valley trying to “silence” him. Harris replied that a president’s words shouldn’t be “about belittling, much less harming, anyone” and that she doesn’t believe Trump ever “fully appreciated that responsibility.”

Trump has not at all been pleased with this latest attack, which is just one of many he has endured during his time in the Oval Office. Last week the president said the official who tipped off the whistleblower is “close to a spy.” He then implied that individual should be executed for treason.

Greta Thunberg Has Been Declared A ‘Successor’ of Jesus, According to Church of Sweden (Update)