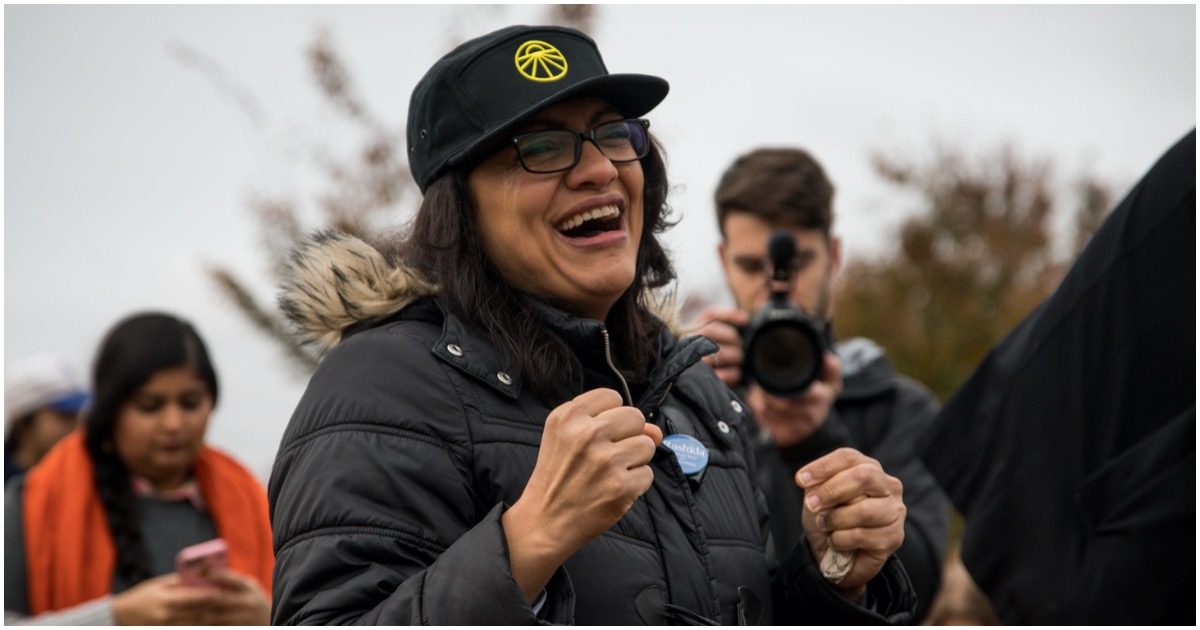 Democrats like Rashida Tlaib (MI) have it so hard in the United States, the worst nation on earth. Facepalm. Why some people advocate for such silly policies simply out of spite, for whatever reason, will continue to remain a mystery to sane Americans.

On Saturday afternoon, Tlaib was arrested for protesting. Here’s the deal, via Washington Examiner:

Photos by a spokeswoman for the hospitality workers’ union UNITE HERE showed Tlaib joining catering workers for Delta Air Lines, who were protesting for higher wages and better healthcare.

Tlaib was detained briefly and then released, according to the ABC affiliate for Chicago.

Workers are done with unaffordable health care and poverty wages—and aren't giving up until they get the good jobs we deserve.#1job pic.twitter.com/RzwHX6Gy3j

President Trump and Tlaib go together like peanut butter and mustard – not very well.

They’re both strong-headed. They’re both doing what they think is best for the country. Of course, only one person is right in the way they’re going about it.

When it comes to policy, Tlaib’s isn’t exactly sound. In fact, it’s downright blasphemous in every sense of the word.

Like her ilk, Tlaib cares about power and telling those who disagree with her how to live their lives. Bottom line.

Recently, Rashida said something really silly considering it will never come to fruition. As expected, POTUS Trump took notice and wasn’t about to let it slide.

See for yourself, via The Hill:

Rep. Rashida Tlaib (D-Mich.) revealed in a new interview that House Democrats have discussed jailing allies of the president who do not comply with congressional subpoenas, an escalation of the House’s efforts to force White House compliance with an impeachment inquiry.

Tlaib told Deadline Detroit that such an action, known as inherent contempt, would be “uncharted territory” for Congress but added that “serious conversations” about taking the step have occurred within the Democratic caucus.

A despicable human being! https://t.co/3KpgUuRaXU

Maybe some people are starting to wake up and really take a deeper look at who the people of Michigan elected to office?

Martha Raddatz destroyed Rashida Tlaib's argument: "You voted against the $4.6 billion emergency border bill to deal with the surge of migrants that included almost $3 billion to provide shelter & care for unaccompanied children… Isn't opposing aid contributing to this crisis?" pic.twitter.com/uOYyJJ8R5U

Unreal that Rep. Tlaib complains every chance she gets about the situation on the border yet when given the opportunity to add $4.6 Billion in aid you vote against it?? Shameful.#YouDontReallyWantASolution https://t.co/3jiYlMzqru