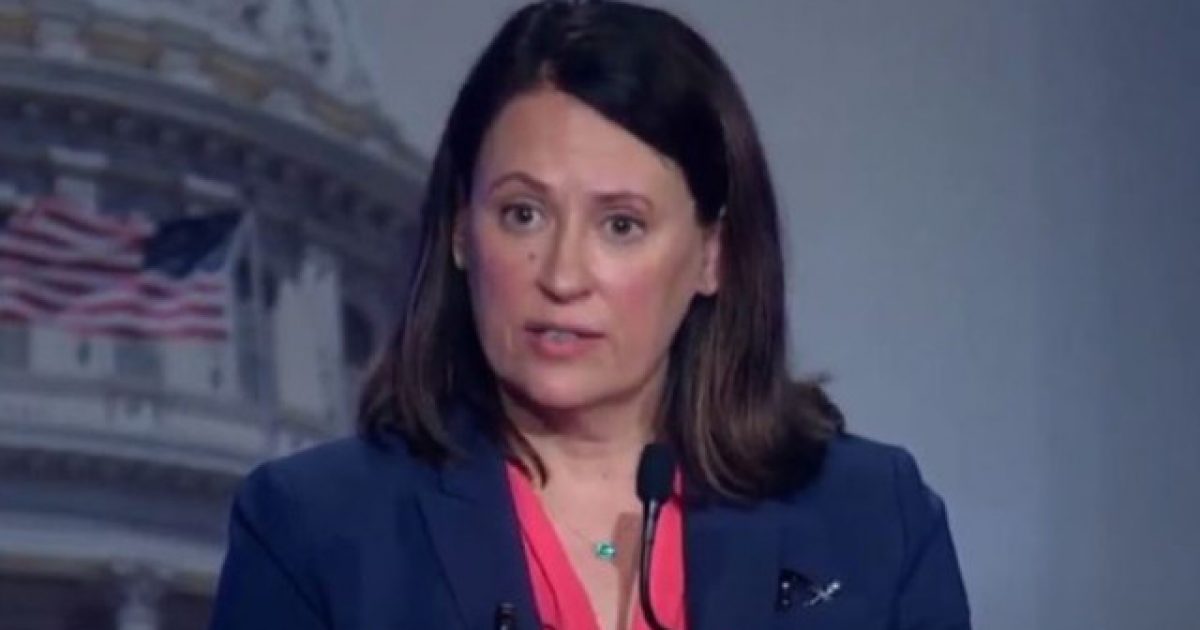 It’s clear at this point that when it comes to hypocrisy, the radical left in the United States knows absolutely no bounds. However, that this is a known fact does not lessen the anger it stirs in the hearts of genuine patriots to see these individuals pushing destructive principles on our country that they themselves won’t abide by, proving they know these are bad ideas.

Iowa Democratic Senate candidate Theresa Greenfield is the latest in a long line of up and coming left-wing hypocrites to be exposed for what they truly are. Greenfield has benefited from taking hundreds of thousands of dollars in cash from corporate special interests, despite the fact she has campaigned hard against allowing money to be a big influence in politics.

Look up “hypocrisy” in the dictionary and this woman’s picture will be the official entry for its meaning.

Here’s more via The Free Beacon:

The Iowa Democrat has accepted nearly $200,000 in campaign contributions from leadership PACs bankrolled by corporations. Greenfield received $30,000 from PACs affiliated with senators Gary Peters (D., Mich.), Debbie Stabenow (D., Mich.), and Kyrsten Sinema (D., Ariz.)—groups that have accepted more than $1 million in corporate PAC contributions, according to the Center for Responsive Politics.

Those donations have helped Greenfield bombard Iowa’s airwaves with advertisements calling for campaign finance reform. Greenfield claimed in a June 19 ad that she does not take corporate PAC money, saying she does not “think politicians should put corporate interests ahead of you.”

In addition to leadership PAC money, Greenfield has benefited from millions in corporate PAC money through outside groups supporting her bid to unseat Sen. Joni Ernst (R.). Senate Majority PAC, a Chuck Schumer-aligned group backed by corporations and liberal billionaires, has spent nearly $7 million on ads supporting Greenfield. When fellow Iowa Democrat Mike Franken criticized Greenfield for benefiting from ads funded by “lobbyists and corporate PACS and Bain Capital and businesses” as well as “dark money,” Greenfield dismissed the attack as “Republican talking points.” Schumer has pledged to spend at least $13.1 million in Iowa this year.

Quite a few Democratic candidates have supposedly renounced the taking of corporate PAC money as they take on GOP incumbents, but apparently this pledge is more of a symbolic gesture than a principle they plan to abide by. In fact, corporate PACs don’t typically give money directly to candidates running for office. The money is usually funneled to lawmakers currently in office.

Leadership PACs allow Democrats to have a workaround in the system, enabling them to collect corporate funds from an indirect source. According to a 2019 report, Greenfield led all Democratic Senate challengers in leadership PAC funds.

Greenfield has also opened her greedy paws to accept almost $50,000 in campaign contributions from lobbyists, another aspect of politics liberals decry out of one corner of their mouths, while giving thanks for the cashflow out of the other.

What’s strange is that Greenfield continues to decry money in politics, all the while accepting these donations from people like Jeffrey Forbes. There’s no answer from her campaign on the hypocrisy of this course of action.

Why would there be? To liberals, whatever is necessary to win is acceptable. Even if it means violating every principle you hold. It’s all just a means to an end.

One Dead, Another In Critical Condition After Latest Seattle CHOP Shooting