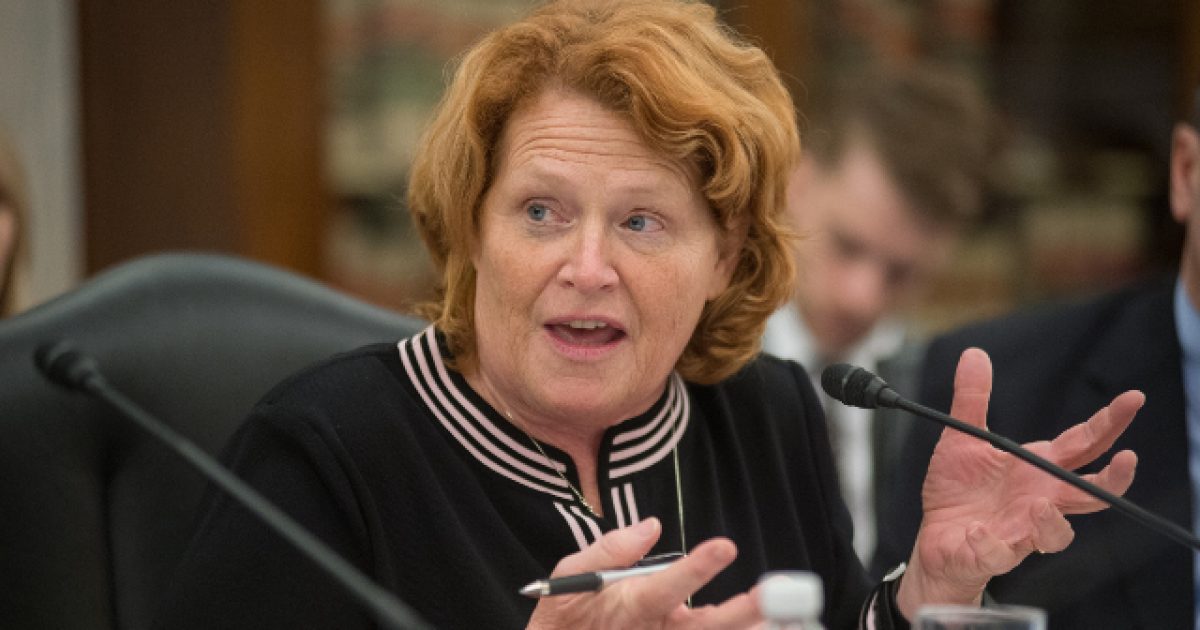 North Dakota Sen. Heidi Heitkamp, who is in a desperate battle to keep her crucial midterm senate seat in the upcoming November election, is having a really, really bad month. Like super bad.

Heitkamp’s poll numbers are already abysmal since voting against Brett Kavanaugh’s confirmation to the Supreme Court, especially after she revealed that she made her decision by watching his testimony with the sound off.

Now she’s really gone and rolled around in the mud after releasing a video that outs the identities of sexual assault survivors who did not give their permission to be named and, as it turns out, were not actual survivors.

Oh, but it gets even worse. Her follow up apology ad might have violated FEC requirements by not providing a campaign disclaimer. Ouch.

After all that, unsurprisingly, Heitkamp’s poll numbers appear to be in an absolute free fall. Valley News Live reports on a new poll conducted Oct 12 through 19, which gauged opinions over several days after Heitkamp’s disastrous survivors ad published in every major newspaper in the state on Monday the 15th:

In an exclusive poll by KVLY, KFYR and Strategic Research Associates of 650 likely voters in North Dakota conducted between October 12 – 19, 2018, Republican challenger Kevin Cramer leads incumbent Democratic Senator Heidi Heitkamp 56% to 40%, increasing his lead since Gray Television’s September poll, in which Cramer held a 10-point advantage. Heitkamp’s support appears relatively fixed. Only 5% of those supporting her say that they might change their mind, compared to 17% of Cramer supporters who say they may still change theirs.

The favorability numbers are just as grim for Heitkamp. She’s now viewed unfavorably by a majority (52%) of likely North Dakota voters, a number that’s spiked 11% since September. Only 37% of voters now view her favorably.

Cramer’s numbers are effectively reversed. The Republican is viewed favorably by a majority (53%) of the state’s likely voters, up 7-points since September, while 38% view him unfavorably.

Valley News quotes James Henson, a partner in the research firm that produced the poll, who underscored that Heitkamp’s Kavanaugh vote and “campaign missteps” have badly damaged her numbers. “Senator Heitkamp appears to have been hurt by her vote against Brett Kavanaugh’s confirmation to the,U.S. Supreme Court as well as by subsequent campaign missteps widely covered in the media,” said Henson.

A Fox News poll conducted three weeks ago, after the Kavanaugh vote but before the survivors ad, showed Cramer with a 12-point lead, 53 – 41. A Mason-Dixon poll from June gave Cramer only a 4-point lead, 48 – 44.

Voting no on Kavanaugh has blown up in Heitkamp’s face severely, due in large part to the fact that the vast majority of North Dakota residents actually supported Kavanaugh’s appointment to the Supreme Court. Talk about not carrying out the will of the people. Geesh.

One has to wonder if this all but seals her fate come November? One thing’s for sure, it’s definitely not looking to promising right now.