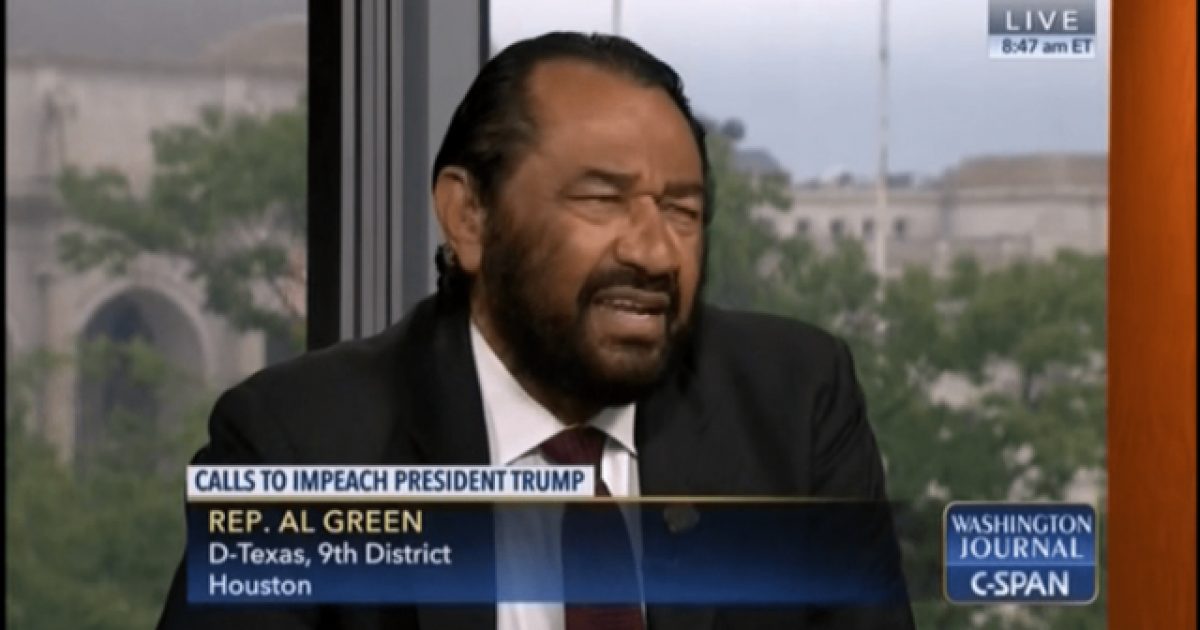 Texas Rep. Al Green is not helping to dispel the notions held by conservatives that the whole impeachment inquiry House Democrats have launched against President Trump is a coup designed to help them get revenge for Hillary’s loss in 2016 with his latest comments suggesting impeachment could be a continuous process.

On Thursday, Speaker of the House Nancy Pelosi made an announcement stating the House Judiciary Committee would be drafting up articles of impeachment against the president as part of the final steps before taking the measure to the House for a full vote.

If the House succeeds in voting to impeach President Trump, the process will then head over to the Republican-controlled Senate. As of right now, there’s very little support available to actually convict Trump of any wrongdoing, so chances are high that impeachment will fail in the Senate.

Green claimed that shouldn’t dissuade Democrats from moving rapidly toward impeachment. During a speech on the House floor on Thursday, Green reminded his colleagues that there is “no limit” to the number of times they can impeach the president.

“The Constitution allows a president to be impeached more than once,” Green explained. “If we impeach now, or at some time in the near future, for one issue that we dearly should, then we find later that the president has other issues that merit impeachment, we can impeach again. There is no limit on the number of times.”

Green noted that he doesn’t believe Trump should be impeached “needlessly,” despite having forced a vote on impeachment three times before the current effort to remove Trump following his controversial phone call with Ukrainian leaders.

Green further stated, “Every time I call it to the attention of this House, there was purpose and reason behind it, and I believe that we can do it more than once if it becomes necessary.”

Green then called on his colleagues in the Senate to get on board with the impeachment effort in the House and vote to oust Trump from office, but stated that if the Senate should fail to do that, it would not stop him from trying to end Trump’s presidency.

Reporter Asks Nancy Pelosi If She Hates President Trump; She Responds With ‘Don’t Mess With Me’