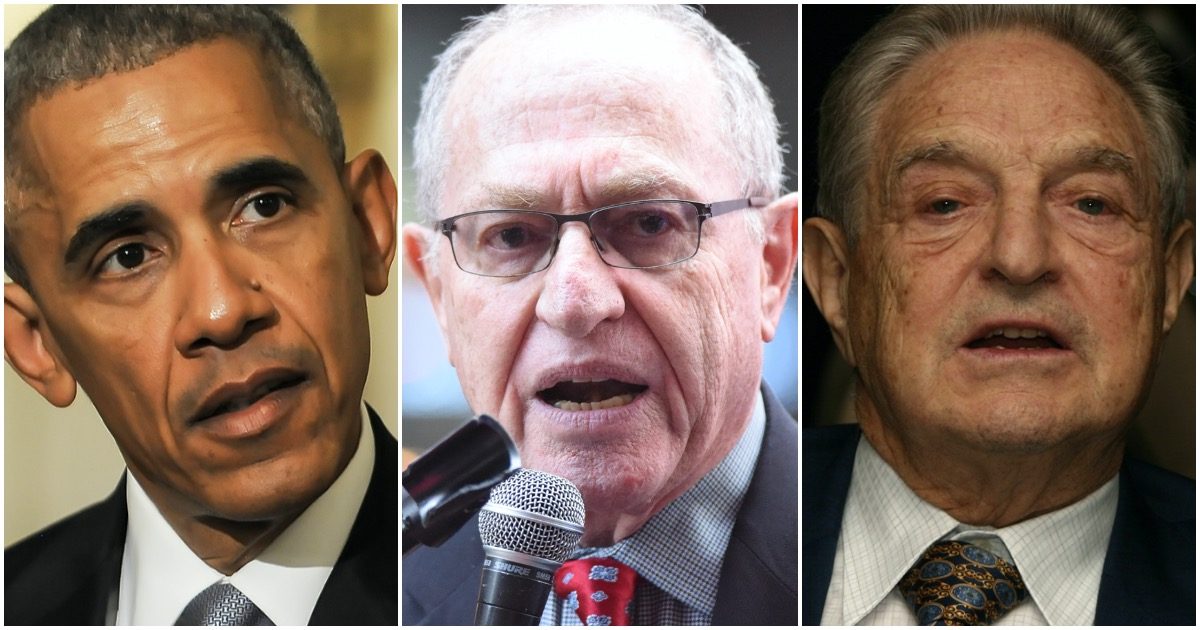 The damage Barack Obama and his administration caused the United States is still playing out to this day, and will continue on for a good while. There’s probably a decent number of Democrats who would concur.

No need to dilly dally, though. Let’s just get right into this story. Here’s what’s up, via Daily Wire:

Harvard Law School professor emeritus Alan Dershowitz revealed in an interview on Sunday that he has proof that former Democrat President Barack Obama ordered the FBI to investigate someone after far-left billionaire George Soros asked for the investigation.

Dershowitz’s remarks come after critics have attacked President Donald Trump for tweeting about matters related to the Department of Justice, which led to Attorney General William Barr publicly asking the president to stop last week.

“President @BarackObama personally asked the @FBI to investigate somebody on behalf of #GeorgeSoros…” –@AlanDersh on @BreitbartNews Sunday with @joelpollak. For #dershowitz's full commentary on #WilliamBarr, #RogerStone, and the #Impeachment trial, go to @siriusxm OnDemand! pic.twitter.com/KM7szKoH3s

George Soros believes Elizabeth Warren, a woman who lied about her heritage for decades in order to take advantage of the system, is most qualified to be president.

Maybe Soros thinks this because he and Warren could potentially be brothers? Twins, maybe? Come on, they definitely look a little alike. Maybe Soros is Cherokee, too?

Texas Senator Ted Cruz (R) has forgotten more about politics and American history than most people will ever know. Red, white, and blue runs through his veins.

Not one to censor himself, Cruz unloaded on Inspector General Michael Horowitz and taught him a thing or two in the process.

Ted Cruz: This wasn't Jason Bourne, this was Beavis and Butthead🔥 pic.twitter.com/NpPQwFJDhP

THE FIX WAS IN…

FBI official allegedly altered document that was basis for FISA warrant on surveillance of the 2016 Trump campaign. pic.twitter.com/qjjCXyUime

And CNN puts it in paragraph 2 – bc this is the most important thing – that Trump will accuse the FBI of wrongdoing in this investigation. Well, yeah!

Well would you look at that. Suddenly people in our MSM want to do their jobs before that report comes out Dec 9th…

The Republicans have been talking about this for 3 years. #JusticeIsComing

The FBI also altered Flynn’s 302. William Barr is going to drop the hammer and nobody will be left to cover for each other 🇺🇸

If the Democrats and a handful of intelligence community personnel escape accountability for this, it's over for the country. The deep state can reverse engineer phony crimes to topple sitting administrations. This has to be devastating with indictments, arrests and prison time.

@SaraCarterDC has been covering this for 3 yrs now! Nonetheless, it’s typical CNN would try to get ahead of the damning report about to drop by calling it a conspiracy 😂😂😂 Eventually you won’t be able to lie to your viewers any longer! #CNNSucks

Biden Doubles Down, Again Says ‘DACA Students Are More American Than Most Americans’