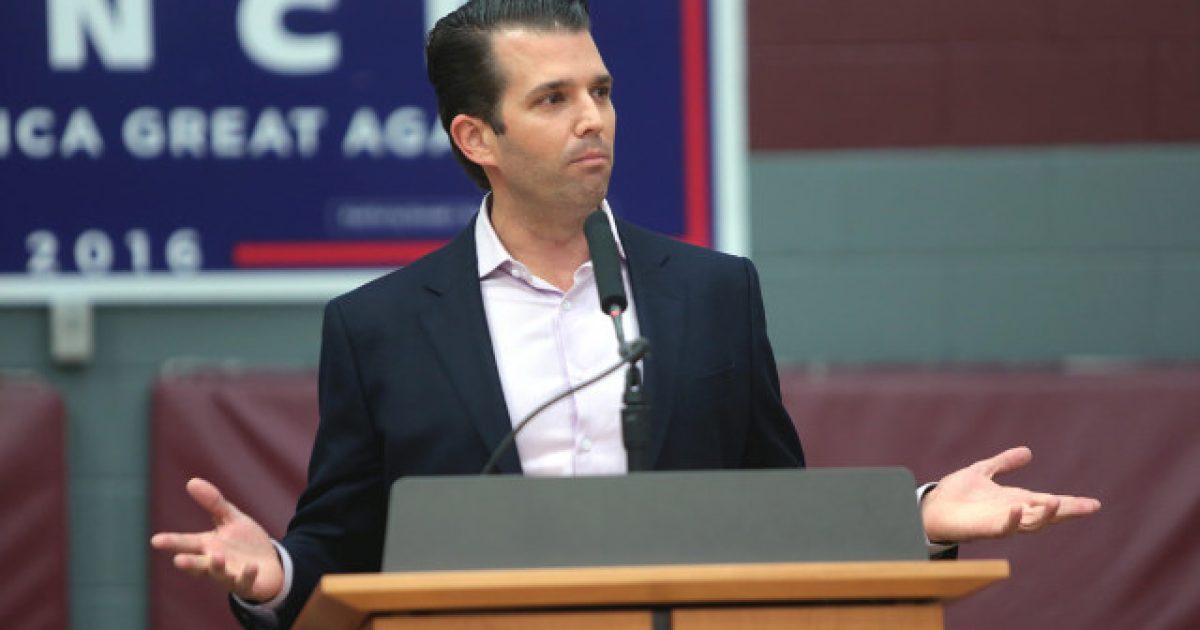 Donald Trump Jr. definitely inherited his father’s social media skills and his ability to take on any challenge that comes his way, a reality put on full display by the brutal zinger he tossed out at Hillary Clinton.

Clinton recently made a comment about all black people looking the same, which you’d think in our hypersensitive, race obsessed political climate people would be falling over themselves to rebuke her for being a racist.

They aren’t though, and that’s enough to get Trump Jr.’s goat.

If you missed it, here’s what happened. During a question-and-answer session over the weekend, Hillary Clinton was asked her about Sen. Cory Booker (D-NJ).

“I adore him,” Clinton said.

“But what do you think of him saying, ‘Kick them in the shins’?” her host, Recode’s Kara Swisher, asked. But that paraphrase wasn’t about Booker, but rather Eric Holder, who was attorney general under former president Barack Obama. Earlier this month, Holder said of Republicans, “When they go low, we kick them. That’s what this new Democratic Party is about.”

So Clinton corrected Swisher. “Well, that was Eric Holder,” she said. “Eric Holder, oh, Eric Holder, sorry,” Swisher said. Then Clinton said: “Yeah, I know they all look alike.” The audience laughed along with Hillary.

Swisher quickly jumped in. “No, they don’t.” Then she praised Hillary for the remark. “Oh, well done,” she said as the audience laughed and applauded.

Of course, had a Republican — or Trump himself — made the clearly racist quip, the media would have had a field day. Instead, virtually no one in the mainstream media reported the comment.

Enter Donald Trump Jr. Retweeting the original story in the Daily Wire, Trump wrote: “Imagine @realDonaldTrump said the exact same thing in the exact same way. What would the media response be? Hysteria? Outrage? It would likely be beyond all that. Because I’m hearing crickets right now after Hillary said it. Wonder why.”

Imagine @realDonaldTrump said the exact same thing in the exact same way. What would the media response be? Hysteria? Outrage? It would likely be beyond all that. Because I’m hearing crickets right now after Hillary said it. Wonder why. https://t.co/ekKLNkLvgU

What really makes this hilarious is that Clinton just made a speech about how political correctness is really just politeness. The irony here is extremely thick:

“What’s often called political correctness is politeness. It’s respecting the diversity that we have in our society,” she said. “The Democratic Party is a much more diverse political party, attracting people who are African-American, Latino, LGBT … And I don’t think it’s politically correct to say, we value that.

It seems that Hillary isn’t one for taking her own advice.