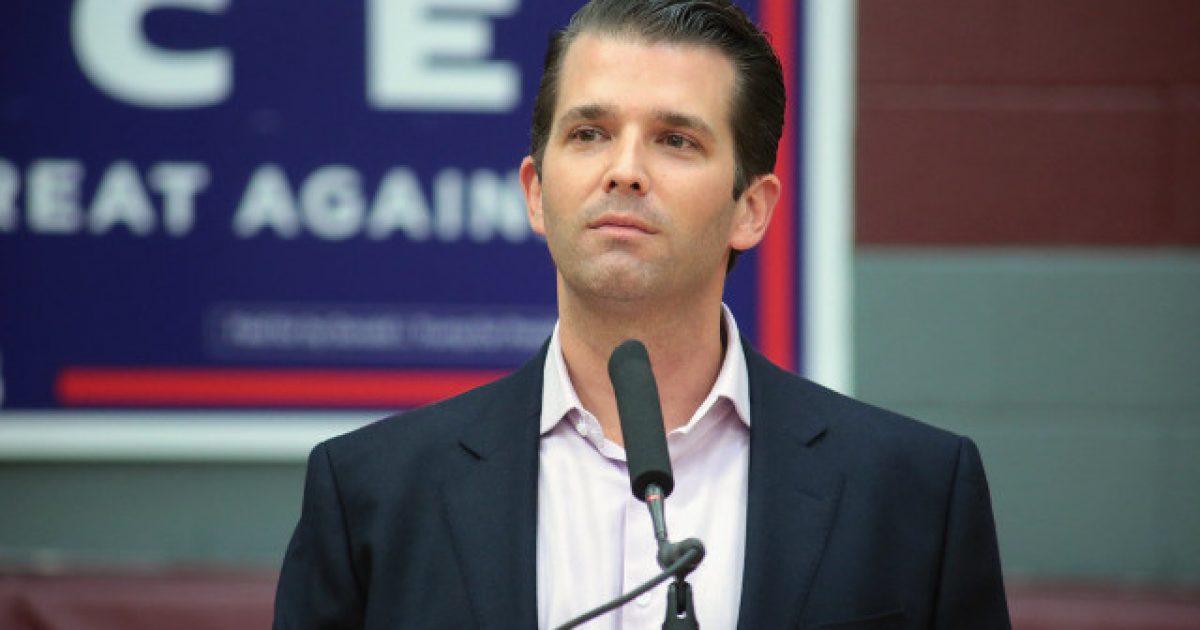 Say what you will about President Trump and his family, but they certainly do love and respect their country, which is more than can be said for radical liberal activist and failed NFL quarterback Colin Kaepernick.

Kaepernick started the whole “taking a knee” garbage that professional athletes have been doing during the National Anthem before sporting events. He’s now back in the news again for making a big stink about the Betsy Ross flag on Nike shoes, which prompted the sneaker manufacturer to remove it promptly.

This decision did not at all sit well with Donald Trump Jr. who lit Nike’s world up over the whole mess.

“The Betsy Ross flag is one type that was flown during the American Revolution,” CNBC reported. “And the shoes were set to be released in celebration of the July Fourth holiday.”

Trump Jr. slammed Nike for its decision and suggested that the company should adopt a communist-style logo that meshed together the hammer-and-sickle from the Soviet Union and Nike’s Swoosh logo.

He tweeted: “If the Betsy Ross Flag, the flag of the American Revolution, is too offensive for Nike to commemorate The 4th of July maybe Nike should go with this… seems to be more in line with their views.”

If the Betsy Ross Flag, the flag of the American Revolution, is too offensive for Nike to commemorate The 4th of July maybe Nike should go with this… seems to be more in line with their views. pic.twitter.com/prAyOwTOau

Trump Jr. is not the only figure on the political Right to slam Nike for its decision.

It’s a good thing @Nike only wants to sell sneakers to people who hate the American flag…. @NFL #HappyFourth https://t.co/G6w8vDjvLP

Nike is an iconic American brand and American company. This country, our system of government and free enterprise have allowed them to prosper and flourish. 4/

Nike has made a poor, poor decision to pull this shoe based on the whining of a self-entitled, ungrateful individual they believe speaks for the majority of American citizens when it comes to social issues.

Kaepernick is definitely not the kind of person Nike should be taking any kind of political advice from, yet here they are, bowing the knee to King Colin instead of doing what they know is right by their customers.

The American flag is a symbol that stands for all we believe in as citizens of this great, though imperfect nation. It’s an embodiment of our principles, principles that people have shed blood and lost their lives to defend.

Kaepernick continues to spit on that legacy and that sacrifice. Shame on you. And shame on Nike.